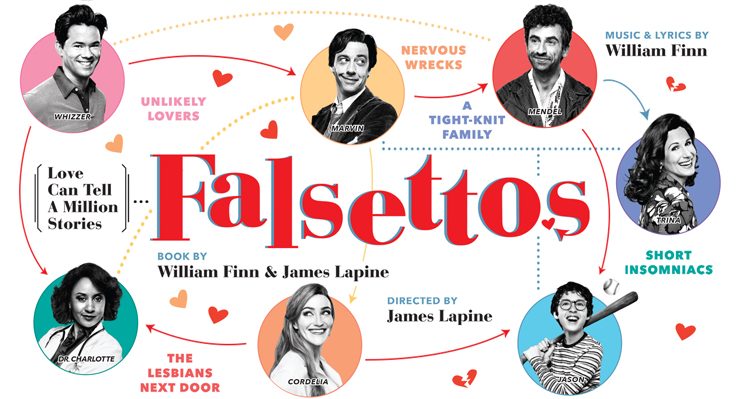 New York (June 12, 2017) – Screenvision Media, in alliance with renowned event cinema creators KAOS Connect, and in association with Live From Lincoln Center, a cornerstone of performing arts broadcasting, today announced that it will bring the Tony nominated production of Lincoln Center Theater’s “Falsettos” to movie theaters for a very limited engagement across the country starting July 12th. Theater information and tickets can be found at falsettosincinema.com, with additional locations added daily.

Nominated for five 2017 Tony Awards, including Best Revival of a Musical, “Falsettos” is a hilarious and poignant look at a modern family revolving around the life of a gay man Marvin, his wife, his lover, his soon-to-be-bar-mitzvahed son, their psychiatrist, and the lesbians next door. Originally created on the cusp of the AIDS crisis, this timely musical about middle?class family dynamics manages to remain buoyant and satirically perceptive even as it moves towards its heartbreaking conclusion.

Lincoln Center Theater’s production of “Falsettos,” presented in association with Jujamcyn Theaters, stars Christian Borle, Stephanie J. Block, Andrew Rannells, and Brandon Uranowitz, all of whom received Tony nominations for their respective performances. Anthony Rosenthal, Tracie Thoms, and Besty Wolfe round out the talented cast. The production was filmed live at the Walter Kerr Theatre in New York City in January 2017.

“It’s an honor to be part of bringing this incredible production to movie theaters so that Broadway fans across the country can enjoy its unparalleled story of love and the modern family,” said Darryl Schaffer, EVP, Operations & Exhibitor Relations, Screenvision Media. “Falsettos is personally one of my favorite Broadway shows, and we couldn’t be more excited to team up with Live From Lincoln Center on distributing this beautiful capture of it.”

“Live From Lincoln Center is thrilled to partner with Screenvision Media and KAOS Connect on this singular movie offering of ‘Falsettos,'” said Andrew C. Wilk, Executive Producer of “Live From Lincoln Center.” “Groundbreaking in its time, and just as relevant and resonant today, ‘Falsettos’ has it all—an extraordinary cast, a story that is both funny and touching, and a spectacular score. Those who have never experienced Falsettos are in for a treat, and those who have seen it on stage will rediscover it through our camera’s lens.”

“Falsettos” will run in theaters nationwide, with the first exhibition date on July 12, 2017. For additional information, film trailers and tickets, please visit falsettosincinema.com.

About Kaos Connect, LLC
Headquartered in Denver, CO, KAOS Connect is the next step in the evolution of the event experience, making events more accessible and engaging both on–and beyond–the Big Screen. By transforming ordinary content into extraordinary experiences, KAOS connects people, organizations, brands and content worldwide. Owned and operated by two seasoned media executives, Shelly Maxwell and Dan Diamond have been credited with the success of creating and building the world’s preeminent EVENT CINEMA business as they transformed movie theatres into places where communities could gather together to experience unique entertainment and infotainment, not just traditional films. For more information: http://www.kaosconnect.com.