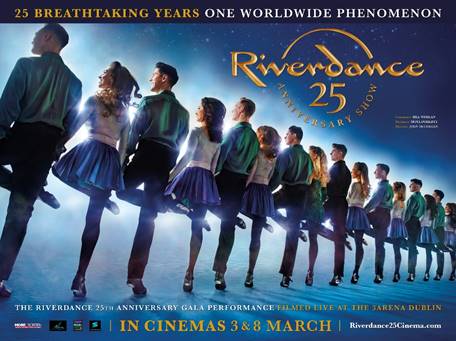 More2Screen today announces the cinema release of the Riverdance 25th Anniversary Show, celebrating 25 years of the Grammy award-winning Irish dance extravaganza. This is the first time the internationally acclaimed family favourite has been shown on the big screen. It will be released in more than 400 cinemas across the UK on 3 and 8 March 2020. Tickets are on sale now at Riverdance25Cinema.com

“The phenomenon rolls on! There will always be a Riverdance!”

25 years ago, 7 minutes changed the face of Irish dancing forever. The Eurovision interval act performance of Riverdance gave millions of people a new and exciting glimpse of the future of Irish dance. Now 25 years later, composer Bill Whelan has rerecorded his mesmerising soundtrack while producer Moya Doherty and director John McColgan have completely reimagined the ground-breaking show with innovative and spectacular lighting, projection, stage and costume designs. Staged at the 3Arena Dublin, the exact spot that the Riverdance story began, the 25th Anniversary Gala performance will be filmed live for its inaugural worldwide cinema release.

Director of Riverdance, John McColgan, said today: “From the moment the first Riverdance performance took place, in Dublin in 1994, we knew that something special had occurred. Producer Moya Doherty, composer Bill Whelan and myself, set about creating a stage show that could build on the thrill, the spectacle and the sheer creative energy of that first performance featuring Michael Flatley and Jean Butler in that first television appearance. We are thrilled that 25 years later Riverdance continues its record-breaking story with its first cinema release to celebrate the 25th anniversary of the show.”

About More2Screen
More2Screen is a leading distributor of Event Cinema with an unparalleled reputation among its blue-chip partners for professionalism, responsiveness and the delivery of great cinema events to audiences around the world. Founded in 2006 by CEO Christine Costello, it has been a global pioneer in the harnessing of digital technology to bring the very best in live music, performance arts and cultural entertainment to local cinema audiences. In collaboration with its stellar list of long-standing content partners, More2Screen has acted as consultants, producers and worldwide distributors in bringing over 150 ‘special event’ productions to its network of more than 7,000 cinemas in 65+ international territories. Winner of the inaugural Best European Distributor award in 2015 (Event Cinema Association) and a Screen International Screen Awards finalist in 2015, 2016 and 2017, More2Screen won the Screen Award ‘Event Cinema Campaign of the Year’ category in 2018 for the live broadcast of the musical Everybody’s Talking About Jamie. In 2019 the highlights of the More2Screen slate included Matthew Bourne’s Swan Lake and Romeo + Juliet, Emma Rice’s critically acclaimed play Wise Children, the special art exhibition event, Gauguin from the National Gallery, London, the live broadcast of The Merry Wives of Windsor from Shakespeare’s Globe and the smash-hit revival of the musical 42nd Street.