Rian Johnson’s “Glass Onion: A Knives Out Mystery” to Release as a Special Sneak Preview Event for One Week in Theaters This Thanksgiving, November 23 a Full Month Before Its Release on Netflix December 23 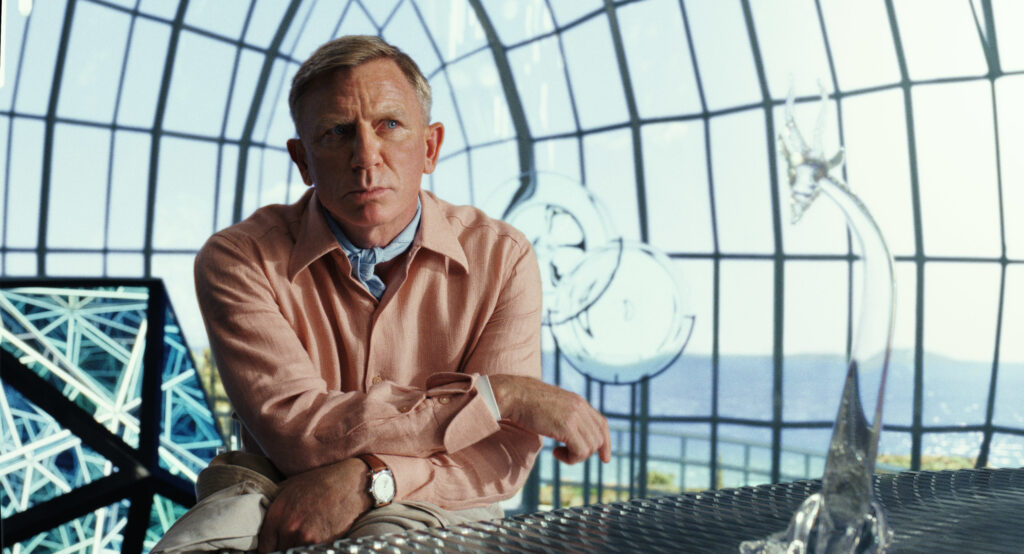 Following a phenomenal response at the Toronto International Film Festival last month, Netflix today announced a one week theatrical sneak preview event for “Glass Onion: A Knives Out Mystery” November 23-29, 2022. Written and directed by Academy Award nominee Rian Johnson, the highly anticipated follow up to his 2019 hit “Knives Out” will be the first-ever Netflix film to debut across all three major US theatrical chains: AMC, Regal, and Cinemark. The film will also play in additional select theaters in the US and internationally including Canada, the UK, Ireland, Italy, Germany, Spain, Israel, Australia and New Zealand. Just in time for the holidays, the movie will debut globally on Netflix one month later on December 23, 2022.

Said filmmaker Rian Johnson: “I’m over the moon that Netflix has worked with AMC, Regal and Cinemark to get ‘Glass Onion’ in theaters for this one of a kind sneak preview. These movies are made to thrill audiences, and I can’t wait to feel the energy of the crowd as they experience ‘Glass Onion.’ Between this and the release on Netflix in December, I’m excited that audiences around the world will be able to enjoy the film!”

“Glass Onion: A Knives Out Mystery” sees Daniel Craig return as suave southern sleuth Benoit Blanc as he peels back the layers on a new mystery surrounded by a colorful coterie of suspects played by a star-studded cast that includes Edward Norton, Janelle Monáe, Kathryn Hahn, Leslie Odom Jr., Jessica Henwick, Madelyn Cline with Kate Hudson and Dave Bautista. Written and directed by Rian Johnson and produced alongside his partner Ram Bergman under their T-Street banner, the film will release globally on Netflix December 23, 2022.

Said Scott Stuber, Head of Global Film at Netflix: “We’re excited to offer fans an exclusive sneak preview of Rian’s incredible film. Given the excitement surrounding the premiere at the Toronto International Film Festival, we hope fans will enjoy this special theatrical event in celebration of the film’s global debut on Netflix in December.”

The limited time only sneak preview event will play in approximately 600 theaters in the U.S. with additional theaters around the world. Tickets will go on sale Monday, October 10 at glassonionmovie.com.

About Glass Onion: A Knives Out Mystery
Benoit Blanc returns to peel back the layers in a new Rian Johnson whodunit. This fresh adventure finds the intrepid detective at a lavish private estate on a Greek island, but how and why he comes to be there is only the first of many puzzles. Blanc soon meets a distinctly disparate group of friends gathering at the invitation of billionaire Miles Bron for their yearly reunion. Among those on the guest list are Miles’ former business partner Andi Brand, current Connecticut governor Claire Debella, cutting-edge scientist Lionel Toussaint, fashion designer and former model Birdie Jay and her conscientious assistant Peg, and influencer Duke Cody and his sidekick girlfriend Whiskey. As in all the best murder mysteries, each character harbors their own secrets, lies and motivations. When someone turns up dead, everyone is a suspect. Returning to the franchise he began, Academy Award-nominated filmmaker Rian Johnson writes and directs “Glass Onion: A Knives Out Mystery: and assembles another all-star cast that includes a returning Daniel Craig alongside Edward Norton, Janelle Monáe, Kathryn Hahn, Leslie Odom Jr., Jessica Henwick, Madelyn Cline with Kate Hudson and Dave Bautista.