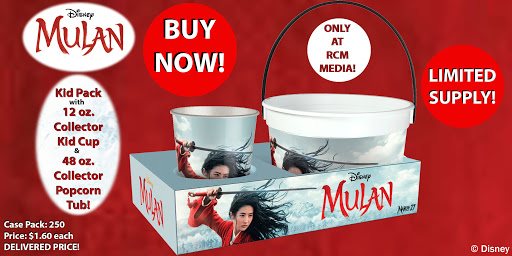 Since some days we know: MULAN, one of the last remaining titles in 2020-with blockbuster-potential, will only be delivered to cinemas in countries where the streaming-service „Disney+“ is not or still not available. Consequently in all German cinemas, and all cinemas of most relevant global cinema key markets, the film will only gain cash by home screenings! Although the worldwide cinema industry is and stays in big and bigger trouble – also flanked by this decision of the biggest US-Studio – Disney positiones itself with huge power aginst thousands of exhibitors and weaken their full-life reliable partners heavily! The question still remains – why?

OK – Warner postponed TENET several times but now came back as partner to the market with a reliable release date End of August.  They do not plan to let all cinemas go into an unpredictical future only because of the fact that their „US-imperator“ is not able to handle „the big C“ and it’s consequences in his big country as most important production and distribution market. A copy and pace of this WARNER decision in mid of September would surely have worked! Disney has delivered so many film hits to cinemas worldwide which produced incredible figures and great takings for both sides, and now – in the worst crisis ever – they leave cinemas alone and do this for the only special purposes – to strengthen Disney + … and also test new business cases!

As a small counter to this behaviour we did activate more than 150 German exhibitors which represent nearly 2.000 screens and asked them to send back – as we did – all haptic MULAN marketing material to the German head office of Disney based in Munich. So DHL and all their collegues bring a lot of gifts this week, when most of the German-Mouse-representatives still hide themselves in their home-offices…

It is a pity – the general awareness for this film was created beginning end of 2019 by all worldwide cinemas in terms of regular trailering, getting the posters and standees positioned and filling the websites and social media channels with MULAN-content. This did cost a lot of work, which was not at all paid for by Disney – so we judge it consequent that our cinemas will not spend any additional costs for getting rid of all that material by paying bills for disposal companies. It is worth to have the material where it came from! May be Disney can use it for all the customers of Disney+ with their huge living-rooms…

On behalf of all German exhibitors that followed our activity