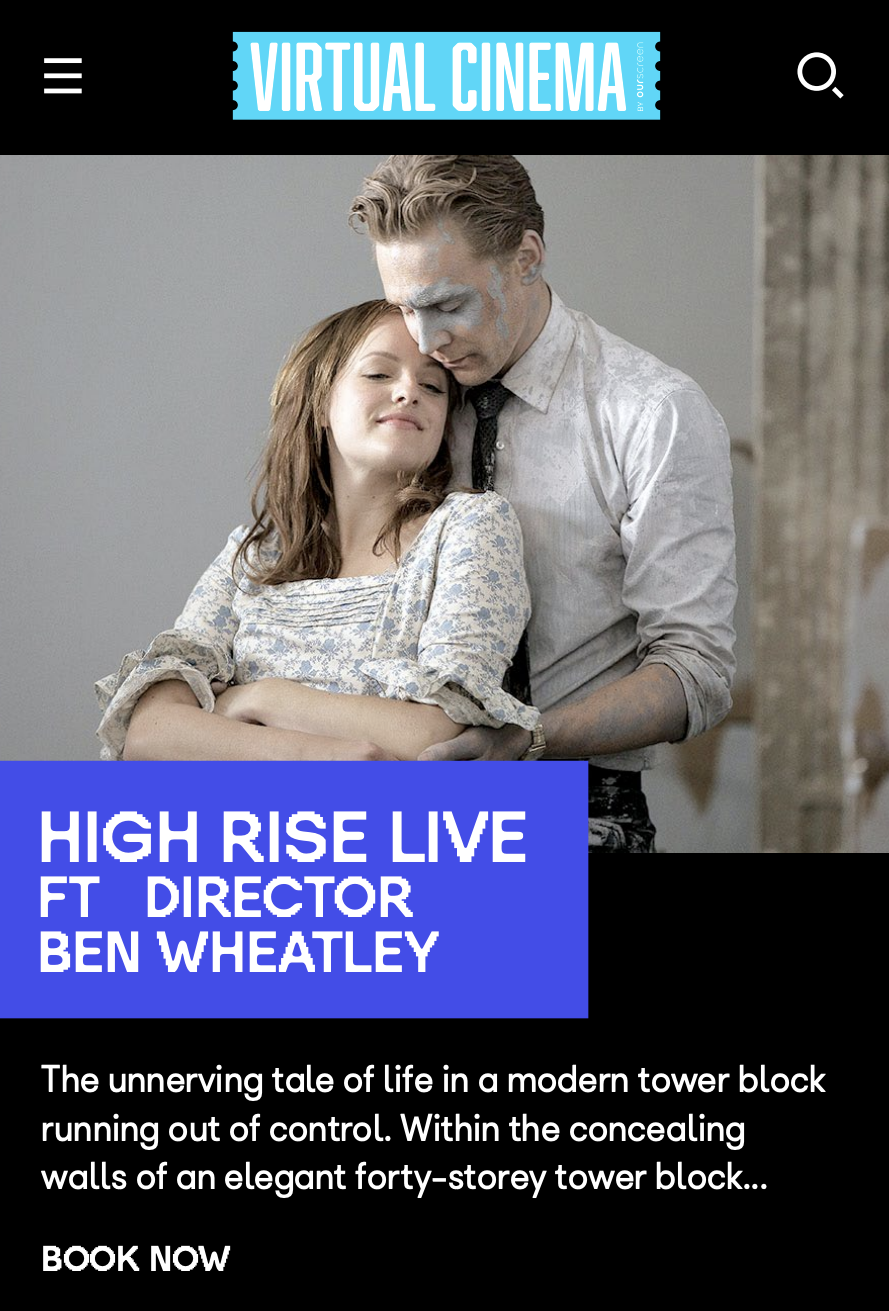 Virtual Cinema by ourscreen, inspired by the shared, social side of cinema, will launch on Monday 28th September with “High-Rise” Live, a special screening of Ben Wheatley’s 2015 film, with an introduction from the director himself.

Developers of cinema’s only crowdsourced screening platform, ourscreen has expanded with the launch of Virtual Cinema, allowing film fans to share in the experience of watching a film together at home, in real time. Unlike traditional streaming platforms, screenings take place at a given date and time, with tickets purchased in advance or on the day of the screening.

ourscreen has operated exclusively in UK cinemas since 2014, giving fans the opportunity to create and attend crowdsourced screenings in over 150 venues. Given cinema’s current social distancing regulations, ourscreen’s usual high-occupancy, fan-led screenings are not possible, but the all-new Virtual Cinema will allow fans to once again gather in large numbers around film and enjoy the social ourscreen experience.

Virtual Cinema screenings will feature exclusive content and special guests – often those involved in the making of the film, from actors to directors to musicians. The first event film will be HIGH-RISE, starring Tom Hiddleston, Sienna Miller, Elisabeth Moss and Jeremy Irons, and introduced by director Ben Wheatley from his own home. The screening will also feature an exclusive first-look at the highly-anticipated horror film SAINT MAUD, due for release October 9th.

David Kapur, founder & co-CEO of ourscreen said, “We’ve built something here that is more like a venue than an online player or store. Our passion is bringing people together around film and if you can’t currently make it to a packed cinema every week, Virtual Cinema is the next best thing. We will be curating a programme of special live events at an accessible price for all.”

For the opening night tickets are £3.99, and 10% of all ticket sales will go to supporting independent cinemas across the UK via BFI FAN, as venues begin to open their doors again. Tickets are on sale now at virtual.ourscreen.com.

About ourscreen
Launched in 2014, ourscreen is the UK’s foremost digital marketplace for cinema, revolutionising our relationship with the cinema. ourscreen allows film fans to buy cinema tickets online or crowdsource their own screenings at more than 150 cinemas across the UK. If enough people book tickets the screening goes ahead.

ourscreen offers access to over 600 films, from cult classics The Big Lebowski and The Rocky Horror Picture Show, to recent releases such as Wes Anderson’s Isle of Dogs. The platform has helped launch a number of films in cinemas, including the Arsenal documentary 89, James Lavelle documentary The Man from Mo’Wax and brought Spice World back to cinemas for it’s 20th anniversary.

About STUDIOCANAL
STUDIOCANAL, a 100% affiliate of CANAL+ Group held by Vivendi, is Europe’s leader in production, distribution and international sales of feature films and TV series, operating directly in all three major European markets – France, the United Kingdom and Germany – as well as in Australia and New Zealand.

STUDIOCANAL owns one of the most important film libraries in the world, boasting more than 6,000 titles from 60 countries. Spanning 100 years of film history, this vast and unique catalogue includes among others the iconic “Terminator 2”, “Rambo”, “Breathless”, “Mulholland Drive”, “The Pianist” and “Belle de jour”.