NATO Releases CinemaSafe “Welcome Back to the Movies” Video 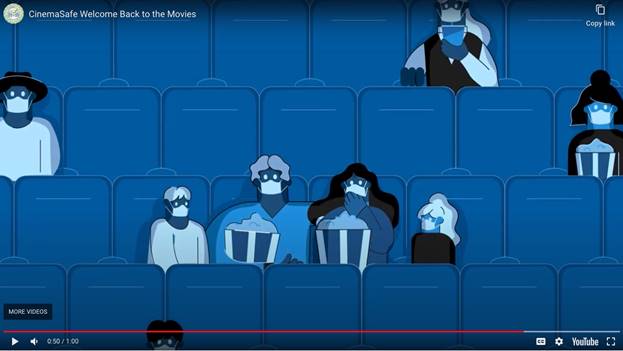 Available to more than 370 companies, representing more than 3,000 theaters and more than 33,000 screens

Washington D.C. & Los Angeles, CA (September 8, 2020) – As movie theaters continue to re-open in the United States, the National Association of Theatre Owners (NATO) today released a CinemaSafe “Welcome Back to the Movies” video.

The 60-second animated video demonstrates the CinemaSafe health and safety protocols moviegoers will see when they return to the movies at participating CinemaSafe movie theaters. The video can be seen at www.CinemaSafe.org and on YouTube at www.youtube.com/watch?v=0hMh1sN2O_8 The video will soon be available onscreen at movie theaters.

More than 370 companies, comprising more than 3,000 locations, and more than 33,000 screens across the United States have signed on to the protocols, with more signing up every day. Participating theaters commit to meet or exceed the voluntary protocols. Those theaters may display the CinemaSafe badge and protocols on their websites, and at their theater locations.