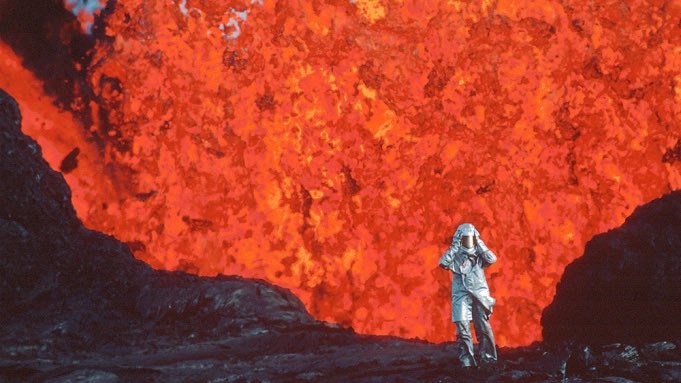 National Geographic Documentary Films has acquired Worldwide Rights to Sundance Film Festival documentary “Fire of Love” from director Sara Dosa (The Seer and the Unseen). Produced by Shane Boris and Ina Fichman and Executive Produced by Greg Boustead and Jessica Harrop, the Miranda July-narrated film premiered to rave reviews this week as the Day One selection of the U.S. Documentary Competition.

National Geographic Documentary Films will release “Fire of Love” theatrically later this year. The film tells the extraordinary love story of intrepid French scientists Katia and Maurice Krafft, who died just as explosively as they lived – capturing the most spectacular imagery ever recorded of their greatest passion: volcanoes. Following its Sundance premiere, the film was hailed by Variety as “a spellbinding experience,” and The Hollywood Reporter as “a gorgeously photographed, dreamily constructed portrait.”

“We are absolutely honored to begin our journey with National Geographic Documentary Films,” said Dosa. “They champion cinematic storytelling about the wonders and power of the natural world, so there is truly no better fit for our ode to love and volcanoes. We are thrilled to take this next step with them to bring the awe-inspiring story of the Kraffts to audiences worldwide.”

“’Fire of Love’ is an eruption of poetry, wonder and romance, a love letter to the natural world and to love itself,” said Carolyn Bernstein, EVP Scripted Content & Documentary Films. “We are honored to collaborate with the immensely talented Sara Dosa and her exceptional filmmaking team on this captivating and visually splendid film.”

The film is a Sandbox Films, Intuitive Pictures & Cottage M production. “Fire of Love” features an original score by Nicolas Godin, of the band Air, and is edited by Erin Casper and Jocelyne Chaput.

National Geographic Documentary Films previously released the Academy Award, BAFTA and seven-time Emmy Award-winning film “Free Solo” and the Academy Award-nominated film “The Cave.” Most recently, in 2021 they released “Becoming Cousteau,” “Fauci,” “The First Wave,” “The Rescue” and “Torn.” Other critically acclaimed films under the banner include Ron Howard’s “Rebuilding Paradise;” Sundance Audience Award winners “Science Fair” and “Sea of Shadows;” Emmy winners “LA 92” and “Jane,” both of which were included in the top 15 documentaries considered for an Academy Award in 2017; and Dupont Award winner “Hell on Earth: The Fall of Syria” and the “Rise of ISIS.”

About Sanbox Films
Sandbox Films is a mission-driven film company that specializes in creative and boundary-breaking documentaries rooted in scientific ideas that inform society and culture. We collaborate with production partners and visionary filmmakers, providing co-production and financing opportunities for bold, artist-driven ideas. Our films have premiered at top-tier festivals around the world — including Sundance (winning the Special Jury Prize for Nonfiction Experimentation), SXSW, Telluride, TIFF, and CPH:DOX; and our films have been acquired by Netflix, Apple Original Films, Neon, BBC, and PBS, among others.

About Submarine Entertainment
Submarine Entertainment is a NYC-based sales and production company consulting and strategizing on the sale, distribution and development of documentaries, feature films and non-fiction series. Submarine has been involved with the sale of six of the last twelve Academy Award winning documentaries: “American Factory,” “Citizenfour,” “20 Feet From Stardom,” “Man on Wire,” “The Cove” and “Searching for Sugar Man.” Submarine’s recent non-fiction series titles include “Sons of Sam,” “The Devil Next Door,” “Evil Genius,” “The Keepers,” “Lenox Hill,” “Pick of the Litter,” and “Wild Wild Country,” which won the Emmy for Best Documentary Series in 2018.