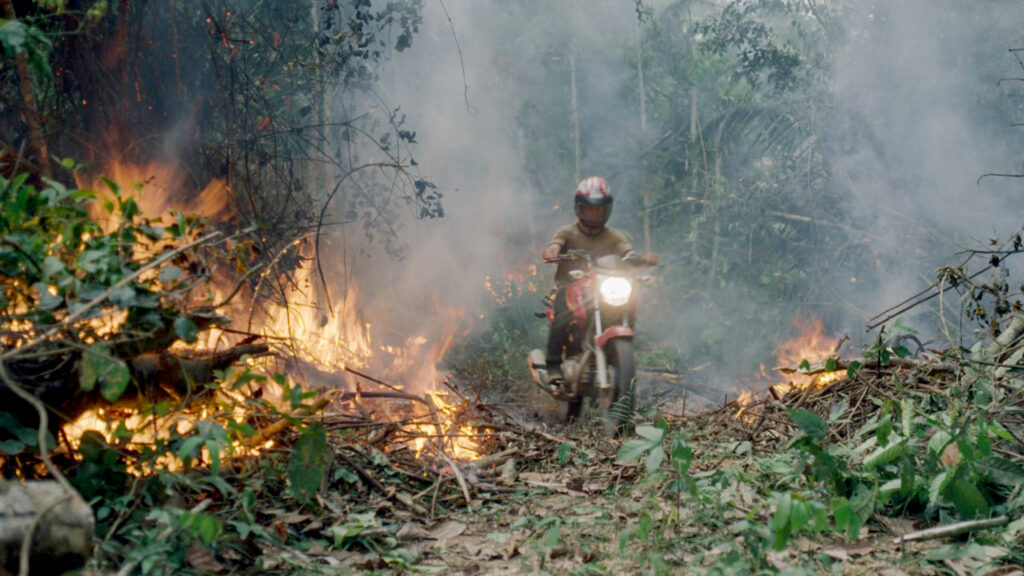 Received with overwhelmingly positive praise after its world premiere at the 2022 Sundance Film Festival, National Geographic Documentary Films announced today that it has acquired the rights to the documentary “The Territory”.

Screening in the World Cinema Documentary competition, “The Territory” provides an immersive on-the-ground look at the tireless fight of the Indigenous Uru-eu-wau-wau people against the encroaching deforestation brought by illegal loggers and an association of nonnative farmers in the Brazilian Amazon. With awe-inspiring cinematography showcasing the titular landscape and richly textured sound design, “The Territory” draws audiences deep into the Uru-eu-wau-wau community while delivering unprecedented access to the other side of the conflict as loggers illegitimately clear land and a network of desperate farmers rally together, readying to colonize the protected rainforest.

Partially shot by the Uru-eu-wau-wau people, the film provides verité-style footage, captured over three years, as the activists risk their lives to set up their own news media team in the hopes of exposing the truth.

“The Territory” is the debut feature film from director Alex Pritz and has been co-produced by the Indigenous Uru-eu-wau-wau community, with activist Txai Suruí onboard as an active executive producer. The project is produced by award-winning filmmaker Sigrid Dyekjaer (“The Cave”), Darren Aronofsky’s Protozoa Pictures (“The Wrestler” “Black Swan,” “Welcome To Earth”), and Passion Pictures (“The Rescue”), along with Will N. Miller, Lizzie Gillett and Gabriel Uchida. “The Territory” has been made by Documist, Associação Jupaú do Povo Uru-eu-wau-wau, Real Lava, Passion Pictures and Protozoa Pictures in association with TIME Studios and XTR with backing from Luminate and Doc Society.

Initial praise for “The Territory” was strong out of Sundance with Variety describing it as “urgent,” “riveting” and “sharply crafted,” while Indiewire praised it as “Gorgeously [and] ingeniously conceived,” noting the film “[paints] an intimate first-hand portrait of joy, pain, and community, before bursting with rip-roaring intensity as it captures a high-stakes struggle for survival unfolding in the moment.”

“’The Territory’ is an urgent story of courage and resilience, beautifully told by first-time feature director Alex Pritz. We are honored to bring the story of the Uru-eu-wau-wau people to the world and help further the conversation and raise awareness around the endangered Amazon rainforest and its indigenous people,” said Carolyn Bernstein, executive vice president of Global Scripted Content and Documentary Films for National Geographic. “We are equally excited to be working with our longtime friend Sigrid Dyekjær whose talent for shepherding stories of impact and advocacy is unprecedented and with our frequent collaborator Darren Aronofsky, a visionary storyteller with an unmatched eye for breakthrough talent.”

Additionally, the team behind “The Territory” will launch an impact campaign with the goal of elevating Indigenous voices and fighting deforestation through nature and community-based solutions. Among multiple tactics and partnerships, they will support global Indigenous-led efforts to hold the international community accountable for the protection of the Amazon rainforest and cessation of violence against land defenders worldwide.

“The Territory” producers brokered the deal with the National Geographic Documentary Films team.

National Geographic Documentary Films will release “The Territory” theatrically later this year before the film heads to its streaming platforms.