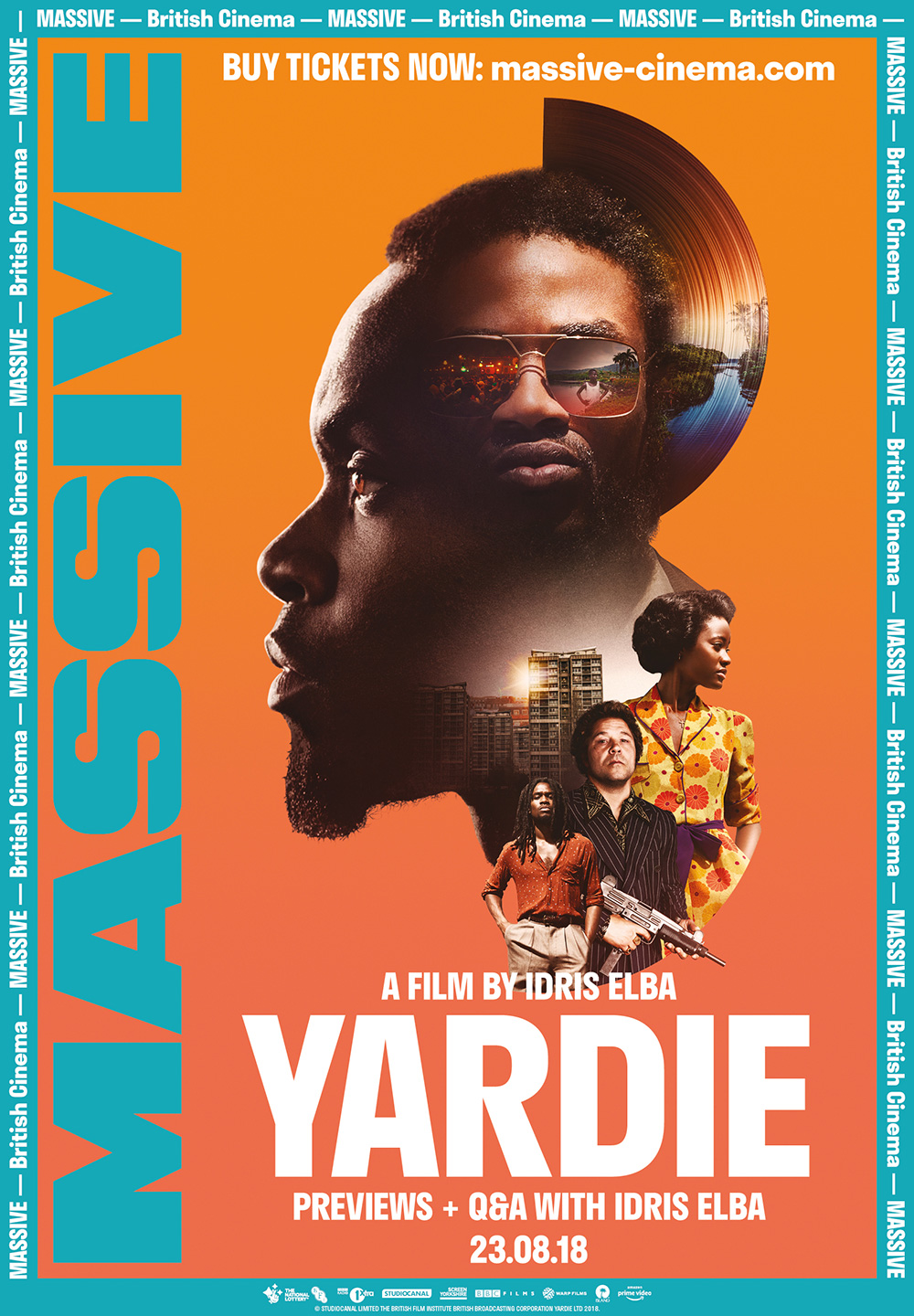 MASSIVE will champion British cinema amongst young people across the UK with support from media partner BBC Radio 1 and Radio 1Xtra.

Today sees the launch of MASSIVE – a new brand designed to connect younger cinema audiences to British film through exclusive ‘see-it-first’ previews, kicking off with special previews of Idris Elba’s directorial debut “Yardie” ahead of its nationwide release on 31st August.

MASSIVE, supported by the BFI and in partnership with BBC Radio 1 and Radio 1Xtra, and delivered by crowdsourced cinema platform ourscreen will support a select number of British films in their release, with the aim of reaching a younger and more diverse audience.

In partnership with StudioCanal, the first film to be supported by the brand will be Idris Elba’s directorial debut “Yardie,” with preview screenings nationwide on Thursday 23rd August, a week before the film’s national release. The previews will be followed by a Q&A with Idris Elba hosted by BBC Radio 1Xtra at Picturehouse Central and streamed live into approx. 200 cinemas across the country. Audiences will also be treated to a live performance by a surprise music act ahead of the film.

Set in 1970s Kingston, Jamaica and 1980s Hackney, “Yardie” centres on the life of a young Jamaican man named D (Aml Ameen). After his older brother is murdered, D is taken under the wing of crime lord and music producer, King Fox. But when a turf war escalates in Kingston, King Fox dispatches D to London, where he reconnects with his childhood sweetheart, Yvonne (Shantol Jackson) and hooks up with a soundclash crew. Before he can be convinced to abandon his life of crime, he encounters the man who shot his brother and embarks on an explosive quest for retribution, which brings him into conflict with London gangster Rico (Stephen Graham).

MASSIVE will host further screenings in 2018 with support from BBC Radio 1 and Radio 1Xtra including exclusive interviews with cast and crew.

Ben Luxford, Head of UK Audiences at the BFI said: “We know young people love seeing films at the cinema, but the question is how we entice them to see more British films on the big screen. That’s what MASSIVE is all about. We’re excited to partner with the BBC on this important project, and Yardie is the perfect film for MASSIVE to kick off with.”

David Kapur, co-founder of ourscreen and elevenfiftyfive said: “Ten years ago we launched elevenfiftyfive to support film by reaching new audiences through new ideas. Then we created ourscreen, enabling more people to watch more films in the cinema. It’s hugely exciting to now channel all this experience into a brave new project like MASSIVE for the BFI that supports cinema-going so broadly.”

The brand will seek to reach more young people with British cinema and British-made films, particularly those aged 15-24. BFI research shows that younger audiences currently make up the largest portion of cinema audiences (47%) and are also the most frequent attenders, but they have the lowest engagement with UK independent film. The aim of MASSIVE is to further understand how younger audiences view and perceive British cinema. The launch of the MASSIVE brand marks the first roll-out of proposals detailed in the BFI’s recently published Commission on UK Independent Film, and this pilot project will collect valuable insights on behalf of the UK film industry.

More information on the films to be supported by MASSIVE can be found at http://www.massive- cinema.com or @massivecinema on Instagram.

“Yardie” is released by StudioCanal in cinemas nationwide from August 31.

About ourscreen
Launched in 2014, ourscreen is the UK’s foremost crowdsourced cinema platform, revolutionising our relationship with the cinema. ourscreen allows film fans to buy cinema tickets online or crowdsource their own screenings at more than 150 cinemas across the UK. If enough people book tickets the screening goes ahead.

ourscreen offers access to over 600 films, from cult classics The Big Lebowski and The Rocky Horror Picture Show, to recent releases Call Me By Your Name and Wes Anderson’s Isle of Dogs. The platform has helped launch a number of films, including My Feral Heart and the Arsenal documentary 89, and brought Spice World back to cinemas for its 20th anniversary.

About BFI
The BFI is the lead organisation for film in the UK with the ambition to create a flourishing film environment in which innovation, opportunity and creativity can thrive by:

The BFI is a Government arm’s-length body and distributor of Lottery funds for film. The BFI serves a public role which covers the cultural, creative and economic aspects of film in the UK. It delivers this role:

Founded in 1933, the BFI is a registered charity governed by Royal Charter. The BFI Board of Governors is chaired by Josh Berger CBE.

About BBC Radio 1 and Radio 1Xtra

BBC Radio 1
BBC Radio 1 is the UK’s No.1 youth station, targeting 15 to 29 year-olds with a distinctive mix of new music and programmes focusing on issues affecting young people. The station is the soundtrack to young people’s lives in the UK and has been for over 50 years.

Radio 1 has a weekly audience of 10.34 million (including all listeners aged 10+) and is the most watched radio station in the world. Radio 1’s YouTube has over 5 million subscribers and receives on average 10 million views a week. Radio 1 has over ten million followers on social media. Radio 1’s BBC iPlayer channel has received over 48 million requests to date.

Radio 1 is a force for good and the leading voice for young people in the UK, tackling relevant issues through our documentaries, Radio 1’s Life Hacks, Newsbeat, as well as our mental health campaigns like My Mind and Me – a year-long campaign launched in December 2016 to get young people talking about mental health and to raise awareness and understanding of mental health issues. Other key social action and education campaigns include #1MillionHours – a year-long volunteering campaign launched in December 2015 that saw Radio 1 and 1Xtra motivate their young listeners to pledge 1 million hours of time to good causes over 12 months.

BBC Radio 1 is a truly multiplatform station, enabling young audiences to connect to the network and to listen, watch and share great content both at home and whilst on the move – via FM and DAB Radio; Radio 1’s YouTube channel; Radio 1’s BBC iPlayer channel; the BBC iPlayer Radio app; online (www.bbc.co.uk/radio1); Freeview and other digital television platforms; and via mobile.

Radio 1Xtra has over 1.5 million followers on social media and over 713K subscribers on YouTube.

BBC Radio 1Xtra is a multiplatform station, enabling young audiences to connect to the network and to listen, watch and share great content both at home and whilst on the move – via DAB Digital Radio; the BBC iPlayer Radio app; online (www.bbc.co.uk/1xtra); Freeview and other digital television platforms; and via mobile.