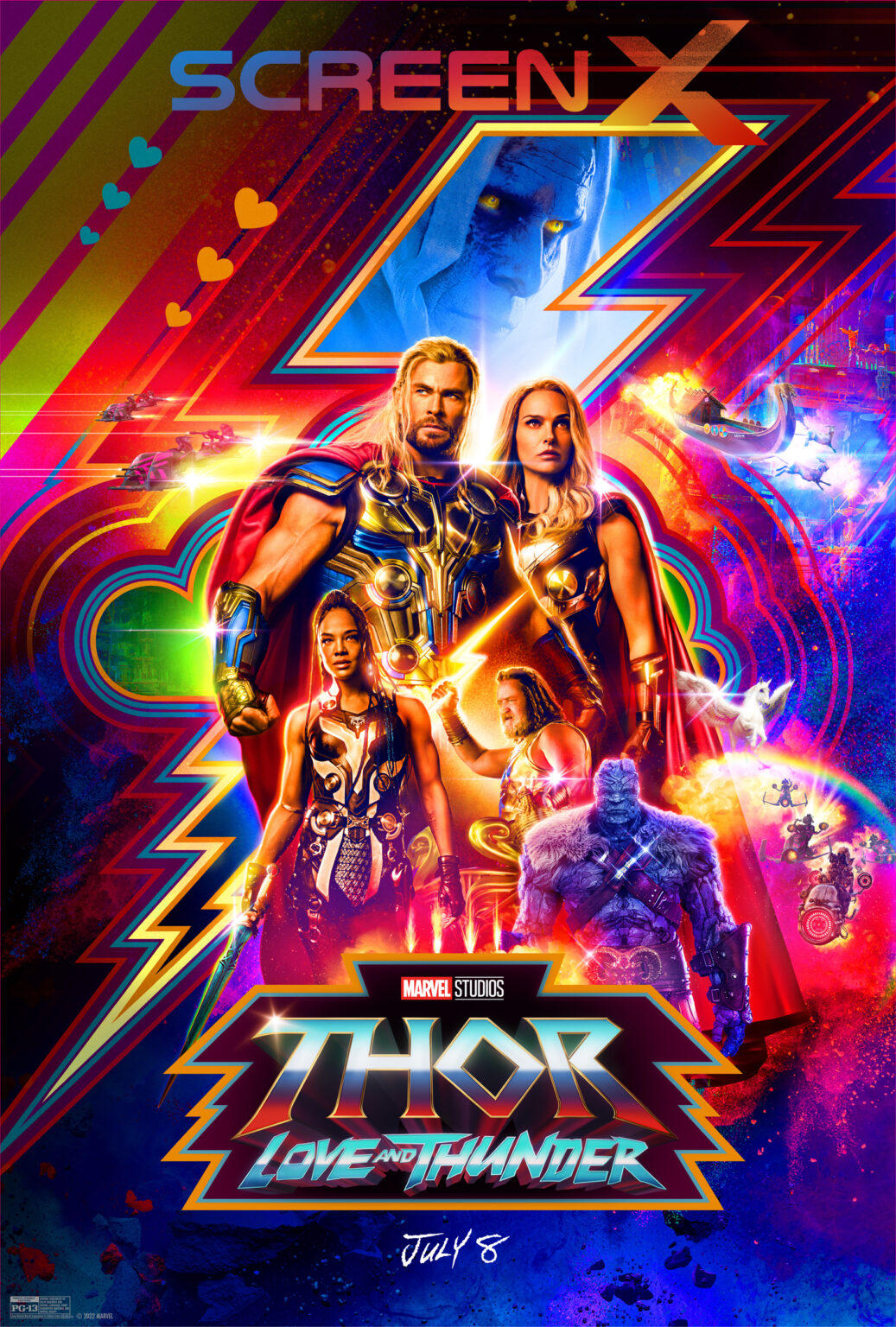 By expanding specially selected film sequences onto the left and right-side walls of the auditorium, ScreenX surrounds and transports moviegoers into the otherworldly action of the film. CJ 4DPLEX worked closely with Marvel Studios and Taika Waititi to ensure the highest quality presentation of the cosmic adventure and guarantees an immersive, 270-degree panoramic viewing experience that can't be replicated anywhere else. “Thor: Love and Thunder” will be available on over 380 screens worldwide and over 63 screens at Regal Cinemas, Cineplex, B&B Theatres, Cinepolis and CGV Cinemas across North America.

4DX transcends the traditional moviegoing experience by submerging audiences into CJ 4DPLEX's innovative theater technology that enhances on-screen visuals with over 21 unique motion and environmental effects. “Thor: Love and Thunder" will be on over 783 4DX screens worldwide and over 50 screens in North America with Regal Cinemas, Cineplex, Cinepolis, Marcus Theatres and CGV Cinemas.

“We’re delighted to take audiences on an intergalactic journey with our exhilarating premium formats, ScreenX and 4DX,'' said Don Savant, CEO & President, CJ 4DPLEX America. “Thank you Disney, Marvel Studios and Taika Waititi for your close collaboration and creative input to make ‘Thor: Love and Thunder’ an electrifying experience in both ScreenX and 4DX.”

“We are thrilled to continue to support the Marvel Cinematic Universe,” said Jongryul Kim, CEO, CJ 4DPLE. “‘Thor: Love and Thunder’ is a thunderous, out-of-this-galaxy adventure that deserves the highest-quality experience, that we know 4DX and ScreenX will deliver to the audiences around the world.

“Thor: Love and Thunder” tickets are on sale now and can be purchased at your local ScreenX and 4DX theaters.

About “Thor: Love and Thunder”
Marvel Studios’ “Thor: Love and Thunder” finds the God of Thunder (Chris Hemsworth) on a journey unlike anything he’s ever faced – one of self-discovery. But his efforts are interrupted by a galactic killer known as Gorr the God Butcher (Christian Bale), who seeks the extinction of the gods. To combat the threat, Thor enlists the help of King Valkyrie (Tessa Thompson), Korg (Taika Waititi) and ex girlfriend Jane Foster (Natalie Portman), who – to Thor’s surprise – inexplicably wields his magical hammer, Mjolnir, as the Mighty Thor. Together, they embark upon a harrowing cosmic adventure to uncover the mystery of the God Butcher’s vengeance and stop him before it’s too late. Directed by Taika Waititi (“Thor: Ragnarok,” “Jojo Rabbit”) and produced by Kevin Feige and Brad Winderbaum, “Thor: Love and Thunder” opens in U.S. theaters July 8, 2022.

About CJ 4DPLEX
CJ 4DPLEX is a leading, next-generation cinema technology company, headquartered in Seoul with international offices in Los Angeles and Beijing. The company has created innovative film technologies for theaters worldwide that include ‘ScreenX’, ‘4DX’, and ‘4DX Screen’ for consumers to experience films in ways that were never before possible. CJ 4DPLEX is a part of the CJ Group conglomerate that also includes entertainment powerhouses CJ CGV, the fifth largest theater chain in the world, and CJ ENM (CJ Entertainment & Media), who produced the Academy Award, Golden Globe and SAG Awards winning film, “Parasite”. CJ 4DPLEX was named Most Innovative Company of 2017 and 2019 in Live Events by Fast Company, and the technology has been recognized with Silver at the Edison Awards in the Media and Visual Communications-Entertainment category in 2015 and 2018.

ScreenX is the world’s first multi-projection cinema with an immersive 270 degree field of view. By expanding the image beyond the frame and onto the walls of the theatre, ScreenX draws you into the story on the main screen and immerses you in a virtual reality like setting with cinema quality resolution. To date, there are over 380 ScreenX auditoriums around the world in 38 countries.

4DX provides moviegoers with a multi-sensory cinema-going experience, allowing audiences to connect with movies through motion, vibration, water, wind, snow, lightning, scents, and other special effects that enhance the visuals on-screen. Each 4DX auditorium incorporates motion-based seating synchronized with more than 21 different effects and optimized by a team of skilled editors. To date, there are over 783 4DX auditoriums around the world, spanning over 69 countries.

4DXScreen is a powerful combination of our super premium immersive theatre technologies of ScreenX and 4DX in one auditorium, creating a never-before-seen experience for cinemagoers. To date, there are 41 4DXScreens installed around the globe.