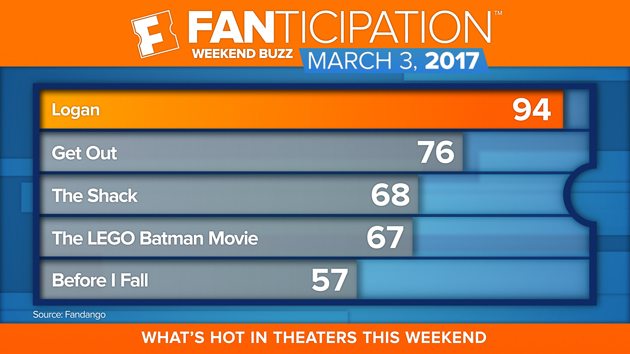 Hugh Jackman’s third Wolverine solo movie, “Logan,” is clawing its way to the top of Fandango’s weekend ticket sales and movie buzz indicator Fanticipation with 94 out of 100 points. “Logan” is outpacing all “X-Men” ensemble movies and all previous Wolverine solo outings at the same point in the Fandango sales cycle.

“The promise of a Wolverine story the likes of which we’ve never seen is clearly fueling anticipation for ‘Logan,’” says Fandango Managing Editor Erik Davis. “Fans are itching to see the tantalizing R-rated action-adventure and Hugh Jackman’s final outing as one of the most popular characters in comic book movie history.”

According to a Fandango survey of more than 1,000 “Logan” moviegoers:

In an exclusive interview with Fandango’s Erik Davis, Hugh Jackman reveals what he will miss the most about playing Wolverine, adding “I wish I were more like him.” You can find the video here.