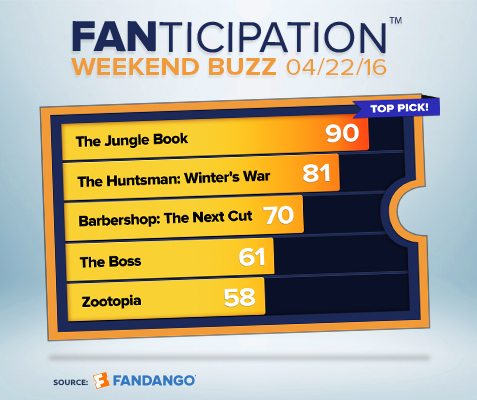 Disney’s live-action “The Jungle Book” is still king of Fandango’s Fanticipation movie buzz indicator with a royal score of 90 out of 100 points, and leads Fandango’s weekend ticket sales.

“Film fans are heading back to the movies for a second helping of Disney magic with Jon Favreau’s ‘The Jungle Book,’” says Fandango Managing Editor Erik Davis. “It’s the current top choice for moviegoers, and could dominate the box office until Marvel’s ‘Captain America: Civil War’ arrives in theaters on May 6.”

“Captain America: Civil War,” which is currently outpacing all previous Marvel movies at the same point in the Fandango sales cycle, was picked by more than a thousand Fandango fans as the most anticipated action film of the summer. For full results of Fandango’s Summer Movie Survey, click here.  For Fandango Movieclips’ Ultimate Summer Movie Mashup, click here.

About Fanticipation
Known for having its finger on the pulse of moviegoers, Fandango’s movie buzz indicator, Fanticipation, provides statistical insight into the movies fans are planning to see in a given weekend. Fanticipation scores (based on a 1 to 100-point scale) are calculated via an algorithm of Fandango’s advance ticket sales, website and mobile traffic, and social media engagement.  Fanticipation is not intended as a forecast of the weekend box office; it is a snapshot of movie fan sentiment. Fandango is the nation’s leading digital destination for moviegoers and fans with more than 49 million unique visitors per month.*