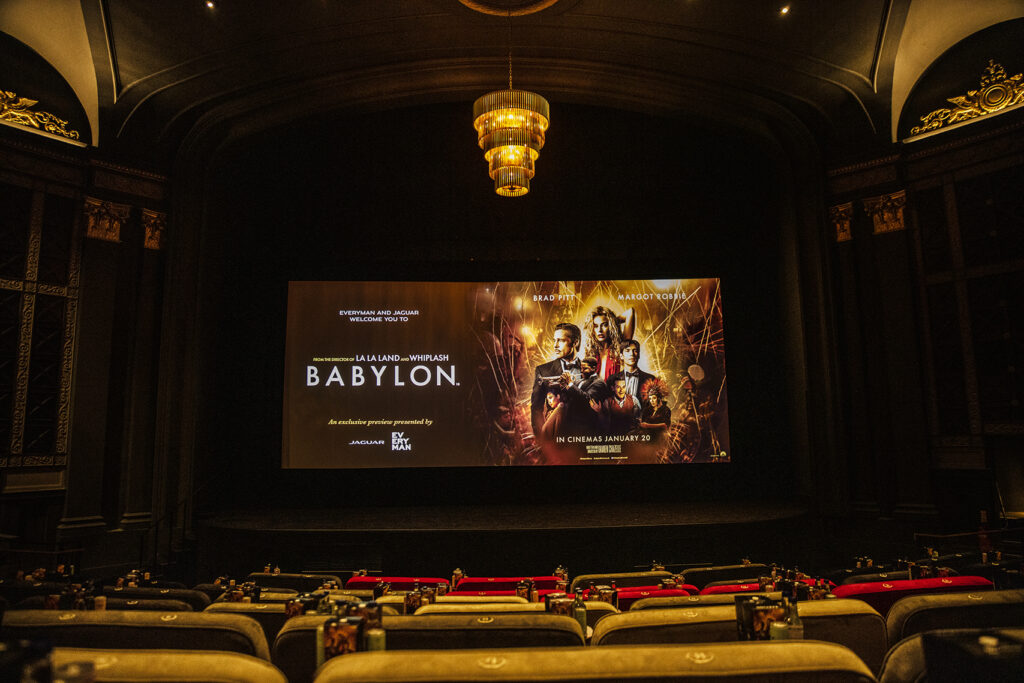 Everyman transformed the space into a dazzling cinematic experience, transporting 300 guests to the hedonistic world of Hollywood in the 1920s.

To capture the exuberance of the time and bring to life the outrageousness of “Babylon”, the immersive event included a live performance piece from The Twins Prendergast, featuring dancers inside and outside the venue, acrobats, showgirls and a 10-piece jazz band, Perhaps Contraption.

The fully immersive party also included a 1920s “Babylon” tasting experience, with special canapés and cocktails all themed around the glitz and glamour of the era. To tie this memorable event together and create an extra special, luxury experience, VIP guests were chauffeured in Jaguar’s fully electric I-PACE vehicles.

Adam Reynolds, Head of Brand Partnerships at Everyman said: “At Everyman we believe that cinema is all about creating memorable experiences, and we are excited to be able to create a campaign that blurs the line between film and reality. Experiential activations like this really highlight the power of cinema and the endless ways brands can get in front of their target audience.”

Catherine Ferguson, Head of Agency Strategy at Pearl & Dean said: “The Everyman Jaguar Partnership is one that we are incredibly proud of and events such as these showcase what can be achieved through a truly collaborative relationship.”

Pearl & Dean has brokered the renewal of the long-running partnership between Jaguar and Everyman until early 2024. This ongoing partnership has provided Everyman’s highly engaged and loyal audience with an array of experiences such as film premieres, preview screenings, meetings with talent, live music performances, outdoor cinema events and new venue openings, all powered by Jaguar.

Everyman and Jaguar are set to launch more exciting campaigns throughout 2023, including the sponsorship of Everyman Screen on The Canal located in King’s Cross.

Pearl & Dean also represents the majority of the independent exhibition sector, with a portfolio of quality circuits such as Everyman, The Light Cinemas, Scott Cinemas, Northern Morris and WTW Cinemas as well as independently operated cinemas, drive-in cinemas and outdoor experience cinemas like The Luna Cinema, each offering individuality and often a specialist audience.  Pearl & Dean’s cinemas offer a varied schedule of programming – from the latest blockbusters through to classic and art-house movies to alternative content such as live opera or concerts. All of this enables Pearl & Dean to offer advertisers precise targeting of either specific demographics or the population as a whole, in an environment where advertisers can showcase brands to a relaxed and captive audience. www.pearlanddean.com

About Everyman
Everyman is redefining cinema. Bringing an innovative lifestyle approach to their venues, where you swap your soft drink for a nice glass of red wine and slice of freshly made pizza served to your seat. There are currently 38 Everyman cinemas across the UK. Created to deliver a warm and friendly atmosphere, with an excellent food and drink selection and fantastic customer service. https://www.everymancinema.com/

About Jaguar
Jaguar has made dramatically beautiful luxury cars since 1935, driven by its passion to make life more extraordinary for its customers. Today's world-class Jaguar model range comprises the XE and XF saloons and XF Sportbrake, F-TYPE sports car, F-PACE performance SUV, E-PACE compact performance SUV and all-electric performance SUV, the I-PACE. From 2025 Jaguar will become a pure electric modern luxury brand with a dramatically beautiful new portfolio of emotionally engaging designs and pioneering next-generation technologies. The journey towards electrification is already under way with a range of mild and plug-in hybrid and full electric models available today.