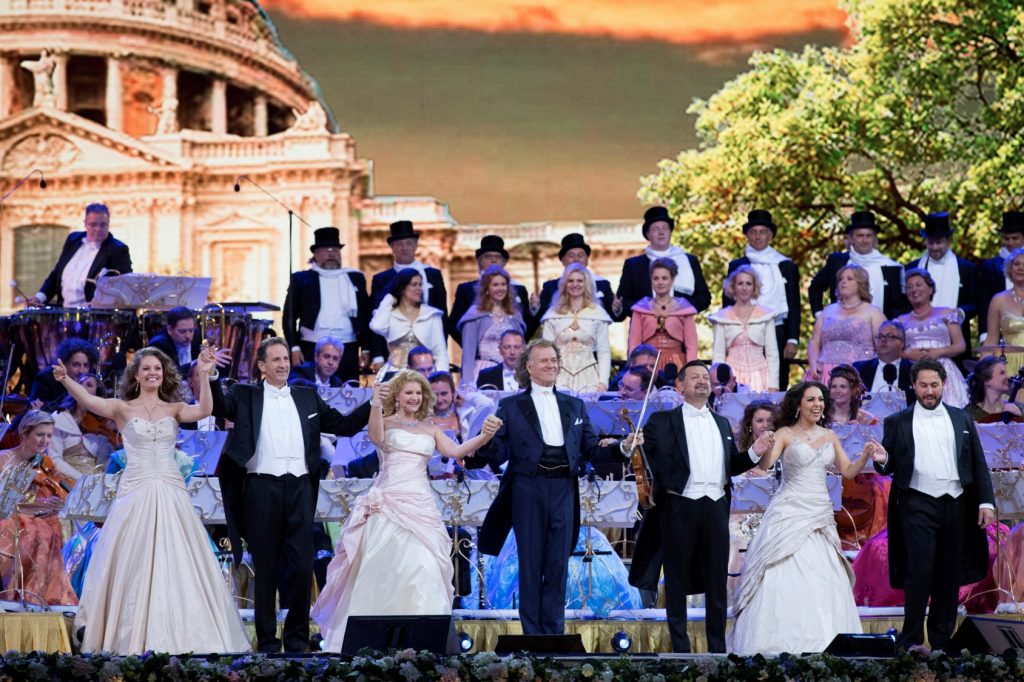 POM to launch “André in Cinemas” in July 2017, beginning with André Rieu’s 2017 Maastricht Concert: Celebrating 30 years of André and his Johann Strauss Orchestra

André Rieu Productions BV today announced the launch of Piece of Magic Entertainment (POM), an international, integrated Event Cinema company, which will broadcast live and recorded performances from various artists and artistic genres in cinemas around the world.

Co-founded by André Rieu, Pierre Rieu and Caspar Nadaud, Piece of Magic Entertainment will launch in July 2017 with a series of concert events in conjunction with the award-winning musician André Rieu, entitled André in Cinemas. Acknowledging the popularity of Rieu’s previous Event Cinema releases and the unique ability of these broadcasted shows to engage mainstream audiences in classical music performances, André in Cinemas will broadcast across the UK, Europe, Australia and New Zealand and also look to gain a stronger foothold in North America, Latin America and China, where acclaim for the genre continues to grow.

Pierre Rieu, who has been appointed President of Piece of Magic Entertainment, is also the existing EVP of André Rieu Productions BV, where he oversees the day-to-day activities of all Rieu-related business. Pierre is joined by Caspar Nadaud, who has been appointed CEO of Piece of Magic Entertainment. Caspar was previously Managing Director at Pathé Live and brings with him over a decade of experience in Event Cinema. He has overseen the sales and distribution of over 200 Event Cinema releases across 70 countries, partnering with the likes of the Royal Opera House in London, the Metropolitan Opera in New York, the Bolshoi Ballet in Moscow and the release of One Direction’s concert Where We Are, the world’s highest grossing Event Cinema release of all time.

Said Rieu and Nadaud of today’s announcement, “Piece of Magic Entertainment aims to become a market leader in Event Cinema production and distribution, with a full-service offering, attracting a variety of international artists, organizations and licensors to showcase their work to new audiences through this truly magical medium. We’ve seen first-hand the power and popularity of Event Cinema and we look forward to working with André, with his particular expertise in this domain, to take this experience even further”.

Piece of Magic Entertainment will position itself as a one-stop production and distribution company for artists, organizations and licensors, housing its own production studio, post-production facilities and crew. The company will look to integrate specific, localised elements into content, such as guest presenters, fan participation and local talent involvement, in order to fully engage with local audiences. The Event Cinema strand produced and distributed by POM will aim to coexist next to an artist’s album, DVD releases and tour plans, making it an intrinsic part of their offering to audiences worldwide.

Over the past three decades, Dutch-born, multi award-winning musician André Rieu has made his global mark as a violinist, conductor and entrepreneur. In 1987, he founded the 60-piece Johann Strauss Orchestra, the largest private orchestra in the world. Each year they tour extensively around the world with spectacular productions, rivalled only by the world’s largest pop and rock bands in size and scale. André Rieu’s concerts draw a global audience of over 600,000 people each year and he has sold over 40 million albums worldwide. Since 2008, Rieu’s concerts have been consistently rated in Billboard Magazine’s worldwide Top 25 Tours lists.

As one of the first artists to truly embrace Event Cinema over 8 years ago, André Rieu has been instrumental in the growth of the genre, drawing an unprecedented number of audience members to these events. Rieu’s performances continue to break international box office records, particularly in the UK and Ireland where in 2015 & 2016, his events became the highest-grossing single day concert events.

Piece of Magic Entertainment will begin selling their Event Cinema series to distributors and exhibitors at CinemaCon later this month.

Event Cinema has seen a rise in popularity internationally over the past decade, across Europe and the United States and has expanded to include various artistic genres, including opera, ballet, theatre and musical concerts.