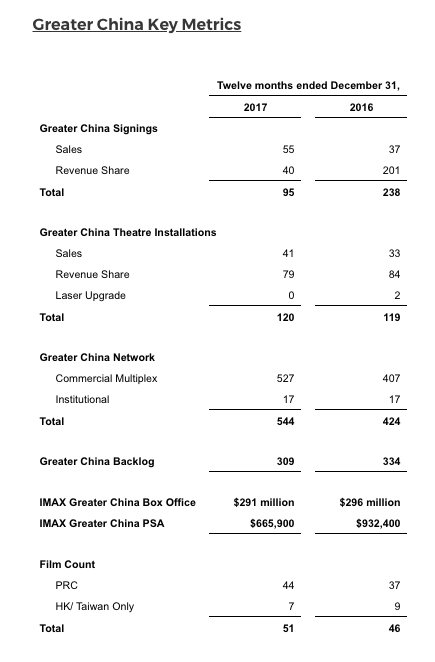 IMAX China Holding, Inc. (“IMAX China”) (HKG: 1970) today reported full-year 2017 Greater China revenue of $126.5 million and gross profit of $77.4 million, or 61.2% of revenues. Adjusted profit for the year came in at a record $45.9 million, up 22% from the prior year, driven by the installation of eight additional sales-type theatres versus 2016 and a 19% reduction in SG&A, excluding stock-based compensation, primarily as a result of the Company’s cost-reduction initiatives. For adjustments to profit for the year and a full detail of financial results, please refer to the corporate filing posted with the Hong Kong Stock Exchange, or to the earnings results posted on the Investor Relations section of the IMAX China web site (http://www.imax.cn/investor).

“Last year, we implemented initiatives aimed at refining our programming strategy to focus on capturing more local language box office, reducing costs and facilitating more operating leverage throughout our business. Record installations in 2017, combined with early positive results from our revenue and cost-savings initiatives, resulted in adjusted profit growth of 22%, to an all-time high of $46 million,” stated Richard L. Gelfond, Chairman of IMAX China. “As a result of our continued free cash flow generation, strong balance sheet and confidence in the Company’s long-term growth prospects, I am pleased to announce that our Board of Directors recommended the payment of a final dividend in the amount of $0.04 per share, equivalent to HK$0.31 per share, or roughly $14 million for the 2017 year. We think this decision is a key component to creating long-term value for shareholders. Overall, we believe our asset-light approach to the cinema business, continued signings and installation momentum, and refined programming strategy strategically position IMAX China for the years ahead.”

IMAX China Dividend
IMAX China today announced that its Board of Directors recommended the payment of a final cash dividend of $14 million or $0.04 per share. The dividend will need to be voted on by the shareholders at the Company’s annual meeting. The Company intends to consider increasing the dividend over time if and as the Company earnings grow.

Network Update
There were 544 systems in the IMAX theatre network in Greater China as of Dec. 31, 2017, of which 527 were in commercial multiplexes. Currently, 340 of these theatres operate under revenue-sharing arrangements and 187 operate under sales and sales-type lease arrangements.  There are also 309 theatres in backlog as of Dec. 31, 2017, of which 236 are for revenue-sharing arrangements.  The Company also installed 120 new theatre systems in 2017, which is up from the 117 new installations recognized during 2016.

Box Office Update
Gross box office from IMAX DMR® titles in Greater China was $290.8 million in 2017, compared with $295.7 million in the prior-year period.

To date, the Company’s parent, IMAX Corporation has announced the following 31 titles for release in 2018. While not all of these titles are guaranteed to be released in China, IMAX China has access to them in the event they secure official Chinese release dates. The Company intends to announce and exhibit additional titles upon confirmation of film release dates in China. All release dates below relate to their US release date unless otherwise noted.

About IMAX China
IMAX China is a subsidiary of IMAX Corporation, and is incorporated under the laws of Cayman Islands. IMAX China was established by IMAX Corporation specifically to oversee the expansion of IMAX’s business throughout Greater China. IMAX China trades on the Hong Kong Stock Exchange under the stock code “HK.1970.”

This press release contains forward looking statements that are based on IMAX management’s assumptions and existing information and involve certain risks and uncertainties which could cause actual results to differ materially from future results expressed or implied by such forward looking statements. Important factors that could affect these statements include, but are not limited to, references to future capital expenditures (including the amount and nature thereof), business and technology strategies and measures to implement strategies, competitive strengths, goals, expansion and growth of business, operations and technology, plans and references to the future success of IMAX Corporation together with its consolidated subsidiaries (the “Company”) and expectations regarding the Company’s future operating, financial and technological results. These forward-looking statements are based on certain assumptions and analyses made by the Company in light of its experience and its perception of historical trends, current conditions and expected future developments, as well as other factors it believes are appropriate in the circumstances. However, whether actual results and developments will conform with the expectations and predictions of the Company is subject to a number of risks and uncertainties, including, but not limited to, risks associated with investments and operations in foreign jurisdictions and any future international expansion, including those related to economic, political and regulatory policies of local governments and laws and policies of the United States and Canada; risks related to the Company’s growth and operations in China; the performance of IMAX DMR films; the signing of theater system agreements; conditions, changes and developments in the commercial exhibition industry; risks related to currency fluctuations; the potential impact of increased competition in the markets within which the Company operates; competitive actions by other companies; the failure to respond to change and advancements in digital technology; the Company’s largest customer accounting for a significant portion of the Company’s revenue and backlog; risks related to new business initiatives; conditions in the in-home and out-of-home entertainment industries; the opportunities (or lack thereof) that may be presented to and pursued by the Company; risks related to cyber-security; risks related to the Company’s inability to protect the Company’s intellectual property; general economic, market or business conditions; the failure to convert theater system backlog into revenue; changes in laws or regulations; the failure to fully realize the projected cost savings and benefits from the Company’s restructuring initiative; and other factors, many of which are beyond the control of the Company. These factors, other risks and uncertainties and financial details are discussed in IMAX’s most recent Annual Report on Form 10-K and Quarterly Reports on Form 10-Q.