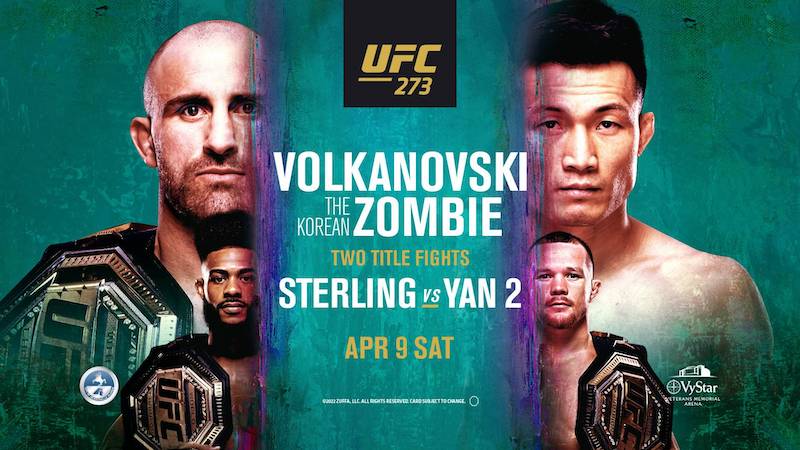 Iconic Events Releasing, the fastest-growing name in event cinema, announced today that it is continuing its ongoing relationship with UFC, the world’s premier mixed martial arts promotion, to bring every monthly marquee UFC Pay-Per-View in 2022 to the big screen. The events will be presented live in Iconic Events’ affiliate movie theatres nationwide.

Through the end of 2022, Iconic will present every UFC Pay-Per-View live in the highest quality theatres throughout the U.S., from the biggest exhibition circuits, to the best and strongest regional chains, offering unique seating and concession options including food, beer, and cocktails.

The action continues with UFC 273: Volkanovski vs. the Korean Zombie on Saturday, April 9, from VyStar Veterans Memorial Arena in Jacksonville, Fla., as featherweight champion Alexander Volkanovski defends his title against “The Korean Zombie” Chan Sung Jung. Plus, a heated rivalry gets its second chapter in the co-main event, as Aljamain Sterling and Petr Yan meet for the undisputed bantamweight title. Moviegoers can get tickets to see the event at https://www.seeufcliveinthetheatres.com/

“UFC is the ultimate theatrical sporting event – there’s simply nothing like experiencing these highly entertaining, competitive, and captivating fights on the big screen,” said Steve Bunnell, Iconic Events’ CEO. “UFC athletes are the best in the world and seeing them on giant movie theatre screens with the high-end sound cranked up is a thrilling way to watch them. Iconic has been the big-screen home for UFC’s pay-per-views since UFC 257: Poirier vs. McGregor in January 2021. With this new deal, UFC in theatres is simply an irreplaceable way to experience the non-stop action and drama of the Octagon.”

“This partnership with Iconic is yet another incredibly effective way to continue to build the profile of our athletes, bring awareness to our most important events, and to provide yet another exciting way to experience UFC’s live product,” said David Shaw, Senior Vice President, International and Content, UFC. “The team at Iconic are terrific partners, and we know they’ll make these fights a must-see draw to movie theatres for UFC fans nationwide.”

About UFC
UFC is the world’s premier mixed martial arts organization (MMA), with more than 625 million fans and 188 million social media followers. The organization produces more than 40 live events annually in some of the most prestigious arenas around the world, while broadcasting to nearly 900 million TV households across more than 170 countries. UFC’s athlete roster features the world’s best MMA athletes representing more than 75 countries. The organization’s digital offerings include UFC Fight Pass, one of the world’s leading streaming services for combat sports. UFC is owned by global sports and entertainment company Endeavor, and is headquartered in Las Vegas, Nevada. For more information, visit UFC.com.