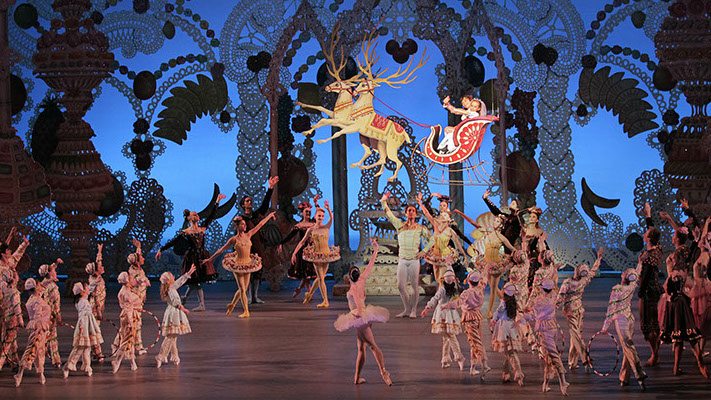 Screenvision Media, a national leader in cinema advertising, in association with renowned event cinema creators KAOS Connect, and Lincoln Center at the Movies, a cornerstone of performing-arts broadcasting, today announced they will bring New York City Ballet’s production of George Balanchine’s The Nutcracker to over 100 movie theaters nationwide for a limited-time run. Theater information and tickets can be found at www.nutcrackerincinema.com.

New York City Ballet’s production of “George Balanchine’s The Nutcracker” premiered to extraordinary success in February 1954, establishing the ballet and its score as perennial favorites around the world. This holiday season, for three days only, families will have the chance to experience the wonder of New York City Ballet’s iconic holiday classic on the big screen. The production will be shown in cinemas across the country on Saturday, December 2; Sunday, December 3; and Tuesday, December 5.

Additionally, Lincoln Center will be partnering with the American Forces Network to present free screenings to active military personnel, veterans, and their families stationed overseas, and with New York City public schools to offer free screenings for school groups.

In New York City Ballet’s production, Tchaikovsky’s beloved melodies transport the young and young at heart to a magical world where mischievous mice besiege a battalion of toy soldiers and an onstage blizzard leads to an enchanted Land of Sweets. Balanchine’s stunning choreography shines amidst awe-inspiring set pieces, 150 ornate costumes, and grand, one-of-a-kind visual effects. This production will showcase an enormous onstage Christmas tree, which weighs one ton and grows to an astonishing 40 feet.

“‘The Nutcracker’ is an iconic holiday production for many, and we couldn’t be more thrilled to bring it to the big screen for fans of the ballet to experience in an entirely new way,” said Darryl Schaffer, Executive Vice President of Operations and Exhibitor Relations at Screenvision Media. “This performance is a magical way for children to experience the ballet and see their peers performing onstage at an early age.”

“‘The Nutcracker’ is a beloved holiday tradition for children and families across the country,” said Andrew Carl Wilk, Executive Producer of Lincoln Center at the Movies. “We are thrilled to bring New York City Ballet’s stunning production to movie theaters this holiday season, for audiences to revisit the enchanting story, phenomenal score, and breathtaking performances—or experience the masterpiece for the very first time.”

Families will be mesmerized by this iconic production featuring an on-stage children’s dance cast, with 110 dancers, 57 people working backstage, and 62 musicians playing in the orchestra.

About Kaos Connect, LLC
Headquartered in Denver, CO, KAOS Connect is the next step in the evolution of the event experience, making events more accessible and engaging both on—and beyond—the Big Screen. By transforming ordinary content into extraordinary experiences, KAOS connects people, organizations, brands and content worldwide. Owned and operated by two seasoned media executives, Shelly Maxwell and Dan Diamond have been credited with the success of creating and building the world’s preeminent EVENT CINEMA business as they transformed movie theatres into places where communities can gather to experience unique entertainment and infotainment, not just traditional films. For more information: http://www.kaosconnect.com.

Lincoln Center has become a leading force in using new media and technology to reach and inspire a wider and global audience. Reaching audiences where they are—physically and digitally—has become a cornerstone of making the performing arts more accessible to New Yorkers and beyond. For more information, visit LincolnCenter.org.

Lincoln Center is committed to providing and improving accessibility for people with disabilities. For information, call the Department of Programs and Services for People with Disabilities at 212.875.5375.

About New York City Ballet
New York City Ballet is one of the foremost dance companies in the world, with a roster of more than 90 dancers and an unparalleled repertory of modern masterpieces. The Company was founded in 1948 by the legendary choreographer George Balanchine and arts patron Lincoln Kirstein, and quickly became world-renowned for its athletic, contemporary style, and a repertory of original ballets that has forever changed the face of classical dance. Now under the direction of Ballet Master in Chief Peter Martins and Executive Director Katherine Brown, NYCB is committed to promoting creative excellence and nurturing a new generation of dancers and choreographers.