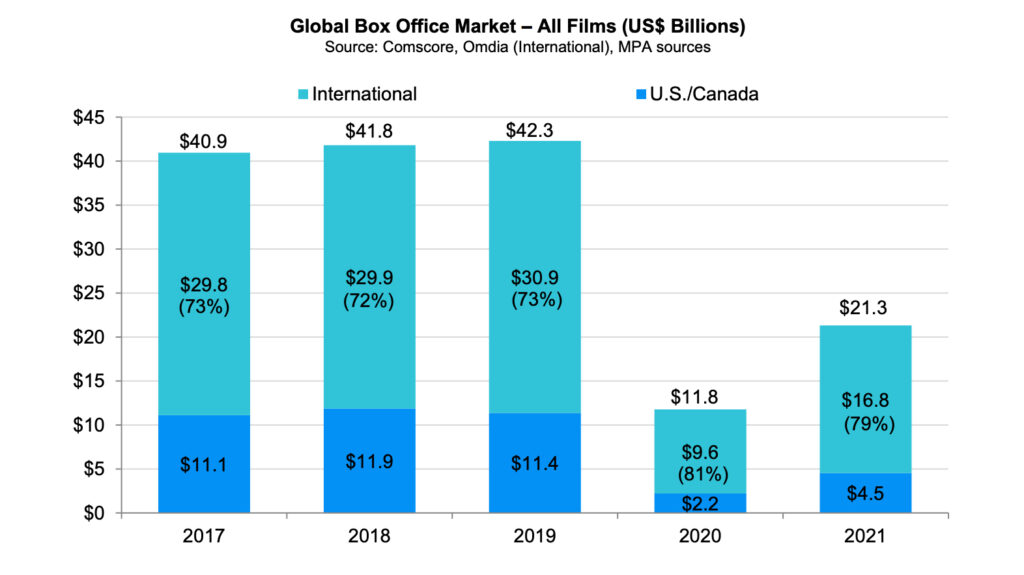 The global theatrical and home entertainment market rebounded in 2021, reaching $99.7 billion in consumer spending and surpassing 2019’s value, according to a new report from the Motion Picture Association.

When the pay TV market is included, the combined figure for consumer spending reached $328.2 billion, matching 2019’s record high. The pay TV market includes monthly subscription fees for cable and other pay TV services, as well as payments for on-demand content. In the United States, the combined theatrical and home/mobile entertainment market was $36.8 billion in 2021, a 14 percent increase compared to 2020, but notably overtaking the 2019 figure of $36.1 billion.

While both the international and U.S./Canada theatrical markets grew substantially compared to 2020, streaming continued to drive the growth of the overall industry. Subscriptions to streaming services reached 1.3 billion globally, marking a 14 percent increase over 2020.

The MPA’s 2021 Theatrical and Home Entertainment Market Environment (THEME) Report provides a comprehensive analysis and survey of the theatrical and home/mobile entertainment market. This annual report includes in-depth data into how the film, television, and streaming industry performed during the year, as well as audience demographic information.

“As the Motion Picture Association marks its 100th anniversary this year, our latest THEME Report underscores how resilient and dynamic our industry is, and I couldn’t be more optimistic about the future of our business,” said Charles Rivkin, Chairman and CEO of the Motion Picture Association. “We are just getting started in writing the next chapter of our industry as streaming continues to boom, theaters are rebounding, and the overall global market for our entertainment product recovers and breaks records. Our members are the most innovative companies on earth. Their capacity to bring people together through the timeless magic of extraordinary stories will continue to captivate billions of viewers over the next 100 years.”

Another notable data point is that there was a significant return to production in 2021 due largely to the early and effective implementation of the industry’s strict health and safety protocols. 943 films entered production during 2021, an increase of 111 percent compared to 2020.

On the theatrical side, the global box office, which includes all films released in each country, was $21.3 billion in 2021, up 81 percent from 2020 but remained below pre-pandemic levels. The international box office, outside the U.S. and Canada, accounted for 79 percent of the global market. Due to COVID-19 impacts on the theatrical market, including varying theater closures and reopenings, comparing the box offices of different countries remains challenging. Under those parameters, the top three box office markets outside the U.S. and Canada were China ($7.3 billion, including online ticketing fees), Japan ($1.5 billion), and the U.K. ($0.8 billion).

The U.S./Canada box office was $4.5 billion in 2021, up 105 percent since 2020. Although the market was still lower than pre-pandemic levels, the number of tickets sold (470 million) was up 100 percent compared to 2020. Other important domestic theatrical findings include:

For a complete version of the report, please click here.

About The Motion Picture Association
The Motion Picture Association, Inc. (MPA) serves as the global voice and advocate of the motion picture, home video, and television industries. It works in every corner of the globe to advance the creative industry, protect its members’ content across all screens, defend the creative and artistic freedoms of storytellers, and support innovative distribution models that bring an expansion of viewing choices to audiences around the world.