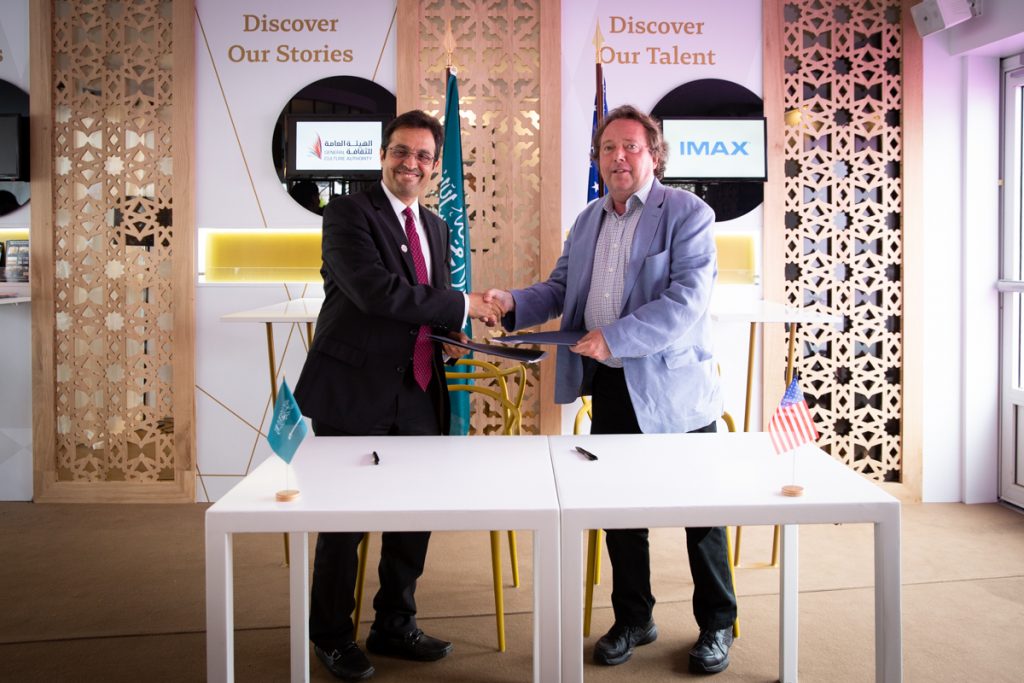 Under a non-exclusive Memorandum of Understanding (MOU), GCA and IMAX will jointly seek opportunities to help Saudi studios and directors release films with cross-border appeal and eventually tap IMAX’s global distribution platform to export their films to non-Arabic markets. IMAX has successfully implemented this approach in markets such as China and India, where it re-masters and distributes local-language blockbusters both in-country and to its wider global network.

“GCA’s mandate is to preserve, protect, enrich and promote our country’s cultural sector by nurturing our cultural talent, supporting cultural diversity and celebrating Saudi identity through the arts. We are excited to explore potential collaboration and partnership with IMAX, which already has an established presence in the Kingdom, to provide a platform to support, showcase and engage with the Kingdom’s creative talent and increase opportunities to share our wealth of stories in new formats both locally and globally. As regulator, developer, funder and initiator for the film sector in the Kingdom, GCA is committed to building an industry that will positively impact socio-economic growth in the country, enhance our creative society and contribute to quality of life, in line with Vision 2030,” said Ahmad Al-Maziad, CEO of GCA.

“We look forward to working with GCA to bring our decades of global expertise in immersive entertainment to bear in support of its development of a sustainable and dynamic film industry in the Kingdom in line with the country’s broader Vision 2030 objectives,” said IMAX CEO Rich Gelfond. “We believe this MOU is a testament to the power of the IMAX brand, which has had a presence in the Kingdom for nearly 15 years, as well as our ability to provide audiences with truly differentiated entertainment experiences. We view Saudi Arabia as an exciting potential growth market for IMAX theatres and we are hopeful that this is just the first step in a long-term collaboration with GCA to establish Saudi Arabia as a global hub for film production and technology.”

On April 30, IMAX opened its first commercial multiplex theatre together with VOX Cinemas in Riyadh, with its debut timed to the release of Marvel’sAvengers: Infinity War. The Company expects to build approximately 15 to 20 IMAX theatres in Saudi Arabia during the coming years. IMAX has built a substantial footprint in the Middle East with 20 theatres in operation in many of the region’s top-performing screens and another 12 in backlog.

IMAX will also explore the establishment of a film-technology lab to train and work with Saudi filmmakers on IMAX-format documentaries and Arabic-language films that showcase the Kingdom’s geography, culture and heritage, as well as the filmmakers themselves.

About the General Culture Authority

The General Culture Authority’s role is to preserve, protect, enrich and promote the Kingdom’s cultural sector, nurturing cultural talent, supporting cultural diversity and Saudi identity through the arts. It seeks to enhance the cultural standing of the Kingdom by extending bridges and opening channels of communication regionally and globally, contributing to the development of a vibrant society, in line with Saudi Arabia’s Vision 2030. Please visit us atwww.gca.gov.sa or @GCA_Saudi.

The IMAX brand has become synonymous with premium entertainment among audiences worldwide. The Company has produced some of the most successful and award-winning large-format documentaries in the world and supports today’s biggest filmmakers such as Christopher Nolan, J.J. Abrams and the Russo Brothers in using innovative IMAX technology to bring their blockbuster films to life in the immersive IMAX format.