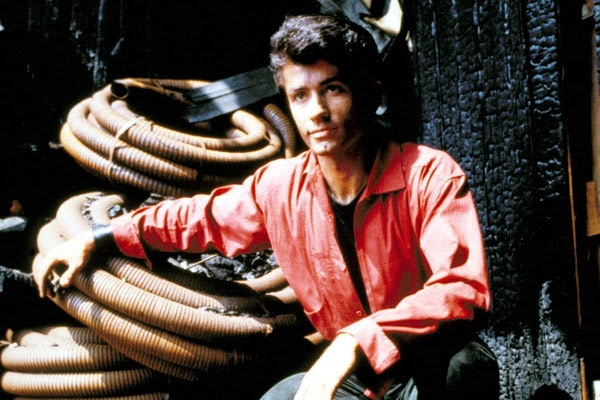 The third annual French Riviera Film Festival (FRFF), will present a special Lifetime Achievement Award to Oscar-winning actor George Chakiris and Industry Excellence Awards to Caroline Lagerfelt and Eric Roberts, at an exclusive ceremony on July 14 at the iconic Beverly Hills Hotel, the announcement was made today by festival founders Gotham Chandna and Nicole Goesseringer Muj.

Festival organizers comment, “We’re truly honored to spotlight such world-class talent as our 2021 special award recipients. George Chakiris, Caroline Lagerfelt and Eric Roberts are truly an inspiration to young filmmakers and actors in the industry, and we’re delighted to honor their outstanding achievements.”

Scheduled from July 11-14, 2021, FRFF, to be held virtually this year on It’s A Short, celebrates short film and short-form content from around the globe will feature the works of filmmakers from more than 20 countries. For information on festival passes and some free events, please visit: https://itsashort.com/frff

As part of the program during the 2021 Festival de Cannes, FRFF will also feature the fourth annual Global Entertainment Showcase to kick off the virtual festival on July 11 at 10 am PST/ 7 pm CET. The showcase, usually held live in the International Village at the Palais des Festival in Cannes, will be held online this year.

The festival will culminate on Bastille Day, July 14 with a special online awards ceremony to air (complimentary event) on It’s A Short hosted by Jezlan Moyet and featuring performances by Grammy-winning artist Paulina Aguirre, DJ Gotta, The Lombard Twins, Medi eM & Dustin Quick, and some surprises.

First launched in 2019 during the time period of the Festival de Cannes, FRFF recognizes and celebrates short-form content created for film, television, web and all digital platforms. Each year, FRFF invites filmmakers from around the world to participate in the by invitation only event that includes screenings, panels, gala receptions and a closing awards ceremony. Attendees and participants include filmmakers, industry executives, celebrities, media and influencers.

About George Chakiris
George Chakiris was born in Norwood, Ohio. He is the son of Steven and Zoe Chakiris. They were immigrants from Greece.

A graduate of the American School of Dance, Chakiris recalls the early days of passing the Grauman’s Chinese Theatre, “where the world’s most glamorous people were seen,” never thinking that one day he would be attending his own premiere for “Westside Story”, for which he received a Golden Globe and an Academy Award. Eventually, in December 2011, he would have his hand and footprints placed in the famous forecourt, among those whom he had idolized.

In 1974, Chakiris made his film debut in the chorus of “Song of Love”. Later he appeared in several small roles, usually as a dancer or a member of the chorus in various musical films. He was one of the dancers in Marilyn Monroe’s “Diamonds Are a Girl’s Best Friend” number in “Gentlemen Prefer Blondes” released in 1953. He again appeared as a dancer alongside Rosemary Clooney in White Christmas in “Love, You Didn’t Do Right by Me.”

In 1961, Chakiris’ biggest success came with the film West Side Story, for which he won the Golden Globe and the Academy Award for Best Supporting Actor for his role as Bernardo.

He starred as a doctor in the film Diamond Head released in 1963, opposite Charlton Heston and Yvette Mimieux, and in 1967, he appeared alongside Gene Kelly and Catherine Deneuve in Jacques Demy’s French musical Les Demoiselles de Rochefort.

Besides films, Chakiris performed on Broadway and for television. In the early 1960s, he embarked on a career as a pop singer, resulting in several hit songs, as well as recording a single with noted producer Joe Meek.

Chakiris worked more in television in the 1970s and 1980s, appearing on such shows as “Wonder Woman”, “Medical Center”, “Hawaii Five-O”, “Dallas”, “Murder, She Wrote”, and the TV daytime drama “Santa Barbara”. In “Superboy”, he appeared as Professor Peterson during the series’ first two seasons from 1988-1990. Chakiris’ last role to date was in a 1996 episode of the sitcom “Last of the Summer Wine”.

His reclusive reputation has made him highly sought for interviews. His hobby of making sterling silver jewelry has turned into a new occupation and can be viewed at georgechakiris.com

About Caroline Lagerfelt
Though known to millions as Celia “CeCe” Rhodes on “Gossip Girl” and for her extensive film and TV credits, Caroline Lagerfelt has established a distinguished career in international theatre and Broadway. The recipient of Outer Critics Circle and Obie Awards, as well as a Drama Desk nomination, her career began under the auspices of theatrical legends Eva Le Gallienne and Sir Ralph Richardson.

She is a huge lover of the short film format, and has appeared in many, working with young directors. These films have taken her to short film festivals in Warsaw, London, Sundance, Milan, Stockholm and others, where many were nominated and/or won prizes.

Among her many feature length films are “Minority Report” with Tom Cruise, “Altered Minds” opposite Judd Hirsch, Wake with JoKoy, “I’ll See You in my Dreams” with Blythe Danner and Sam Elliot, and most recently “The God Committee” with Kelsey Grammer.

She appeared in nine Broadway shows for some of the most celebrated directors of the English-speaking world, among them Sir Peter Hall (“Betrayal” opposite Raul Julia and Roy Scheider), Sir John Gielgud (“The Constant Wife” with Ingrid Bergman), Harold Pinter, Cyril Ritchard, Mike Nichols, Jerry Zaks, and Abe Burrows.

She has appeared in every major Off-Broadway venue, receiving critical acclaim for “Nathan the Wise” opposite F. Murray Abraham, “The Prime of Miss Jean Brodie” opposite Cynthia Nixon, “Moonlight” with Jason Robards, Blythe Danner and Live Schreiber, “Quartermaine’s Terms” with Kelsey Grammer, and for multiple collaborations with Harold Pinter, Simon Gray and Nicolas Kent, among others.

In addition, Lagerfelt has played many of the US and UK’s top regional theatres (Kennedy Center, Guthrie, Williamstown, etc.), highlights including Queen Elisabeth in Schiller’s “Mary Stuart”, “Night and Day” with Ralph Fiennes, “The Resistible Rise of Arturo Ui” with Paul Giamatti, “Les Liaisons Dangereuses” with Dianne Wiest, “The Physicists” with Brian Bedford, George Grizzard and Len Cariou, and Garland Wright’s “The Misanthrope”.

In 2010, Lagerfelt starred as Greta Garbo in Frank McGuinness’ “Greta Garbo Came to Donegal”, voted one of London’s “Top Five Plays of the Year.”

Recently she starred in the two hander “Notes on my Mother’s Decline” at Next Door at New York Theatre Ensemble opposite Ari Fliakos, which was named “Best of Theater 2019” by Scott Heller of the New York Times.

She is currently playing the free-spirited Paula Vreeland on Netflix’s “Sweet Magnolias” and about to play opposite Al Pacino in “The Hunters”.

Roberts received acclaim at the Sundance Film Festival for his roles in “A Guide to Recognizing Your Saints” and “It’s My Party”. He also starred in La Cucaracha, which won Best Film at the Austin Film Festival, and for which Roberts won Best Actor at the New York Independent Film Festival that same year. Other notable performances include his roles in “The Dark Knight”, “Final Analysis”, and Paul Thomas Anderson’s “Inherent Vice” for Warner Bros., Millennium Films’ “Lovelace” and “The Expendables” for Lionsgate.

On television, Roberts’ memorable recurring roles include USA’s “Suits”, “CSI” and “Code Black” for CBS, NBC’s “Heroes”, and “Crash for Starz”. He has appeared in guest star roles on ABC’s “Greys Anatomy”, NBC’s “Will & Grace”, Fox’s “Brooklyn Nine-Nine”, CBS’ “Hawaii Five-O”, HBO’s “Entourage”, and many others.

Roberts was born in Biloxi, Mississippi, and grew up in and around the Atlanta area. He began his career in theatre in New York City where he won the Theatre World Award for his role on Broadway in “Burn This”.

He resides in Los Angeles with his wife of 26 years and brood of felines.