Four New 4DX Theaters to Open in Belgium, France and Spain in Partnership with Kinepolis 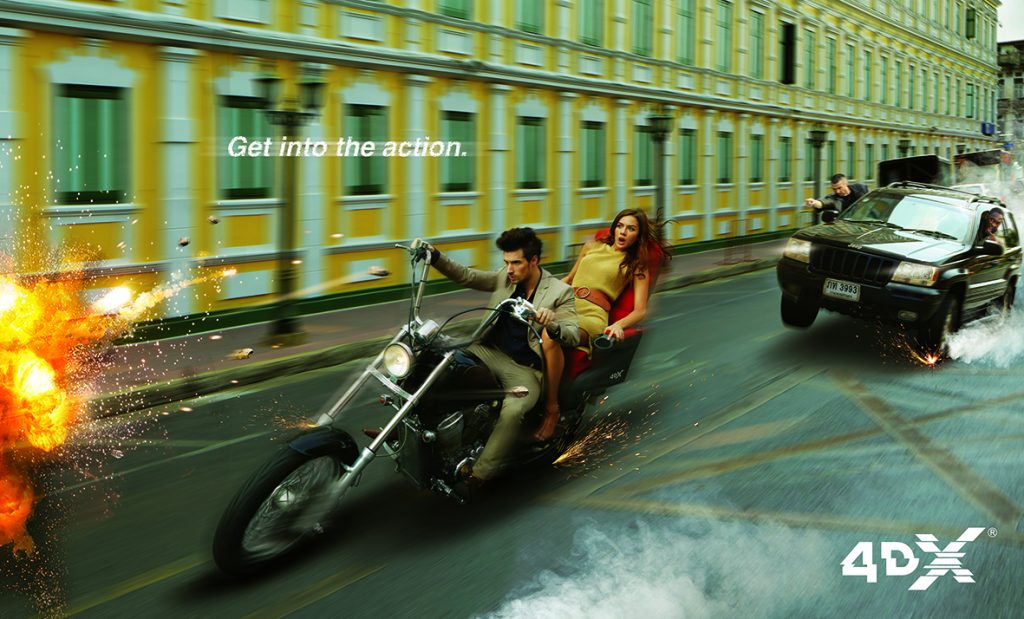 CJ 4DPLEX has today announced that 4DX – the world’s first and leading 4D cinema technology for feature films – is set to open four 4DX theatres with Kinepolis before the end of 2017.

Considered to be one of the biggest innovations in cinematic technology, 4DX raises the cinema experience to a four-dimensional level: in addition to watching the movie, viewers are also part of the action. Moving seats and environmental effects such as wind, water, scent and light – perfectly synchronized with the on-screen action – provide an unprecedented and immersive 4D movie experience. Kinepolis will open 4DX theatres at its cinemas in Antwerp and Brussels (Belgium), Lomme (France) and Madrid (Spain). The first film that Kinepolis will show in 4DX is still to be confirmed.

4DX is a revolutionary cinematic technology that stimulates all the senses. Specially trained 4DX editors ensure that water, wind, light and fog effects, combined with realistic motion simulations, add a new dimension to the action on screen. In a 4DX theatre, all visitors join the car race on screen, float in the ocean, feel the wind in their hair or smell the flowers. 4DX cinema seats are equipped with an AC Servo Motor that enables precise movements and controls the speed of movement, keeping it in sync with what is occurring on screen.

Each year, 4DX cooperates with major Hollywood studios for the release of various movies, from action and animation to horror and fantasy. Concerts and documentaries are also available in 4DX. A total of 105 films were released in 4DX in 2016, including 59 Hollywood blockbusters. 4DX is available for both 2D and 3D films.

Eddy Duquenne, CEO of Kinepolis Group, said: “Kinepolis has always been a leader in introducing innovative technology that intensifies the movie experience for visitors. Cinema is all about experiencing emotions together and 4DX will further increase this. It’s an additional experience that our visitors will appreciate. As such, 4DX fits in perfectly with the ongoing diversification of our offerings, allowing us to meet the demands of various target groups.”

“We are proud to announce the start of our business with the innovative cinema exhibitor Kinepolis.” said Byung-Hwan Choi, CEO of CJ 4DPLEX. “With these openings, we not only expand our reach in our existing markets, Belgium and France, but seize the chance to enter a new European country with Spain. We will never stop moving forward to dominate more markets in Europe and introduce 4DX’s ultimate movie-going experience to more European movie fans.”

About CJ 4DPLEX
CJ 4DPLEX is the world’s first 4D cinema company, headquartered in Seoul with international offices in Los Angeles and Beijing. The company created 4DX, the first and leading 4D cinema technology for feature films, providing moviegoers with an immersive cinematic experience that utilizes all five senses, allowing the audience to connect with movies through motion, vibration, water, wind, snow, lightning, scents, and other special effects that enhance the visuals on-screen. CJ 4DPLEX brings 4DX auditoriums to exhibition partners along with 4DX codes for both major Hollywood blockbusters and local titles. Each auditorium incorporates motion-based seating synchronized with more than 20 different effects and optimized by a team of skilled editors, maximizing the feeling of immersion within the movie, beyond the limits of audio and video. Since 2009, more than 450 Hollywood and local titles have been screened in 4DX. As of October 2017, more than 50,000 4DX seats operate in 415 auditoriums spanning 49 countries. CJ 4DPLEX was named a Most Innovative Company of 2017 in Live Events by Fast Company. For more information, please visit www.cj4dplex.com

About Kinepolis
Kinepolis Group NV was formed in 1997 as a result of the merger of two family-run cinema groups and was listed on the stock exchange in 1998. Kinepolis offers an innovative cinema concept which serves as a pioneering model within the industry. Kinepolis Group NV has 48 cinemas spread across Belgium, the Netherlands, France, Spain, Luxembourg, Switzerland and Poland. In addition to its cinema, business, the Group is also active in film distribution, event organization, screen publicity and property management. More than 2,300 employees are committed each day to providing millions of cinema visitors an unforgettable movie experience. For more information, please visit www.kinepolis.com/corporate