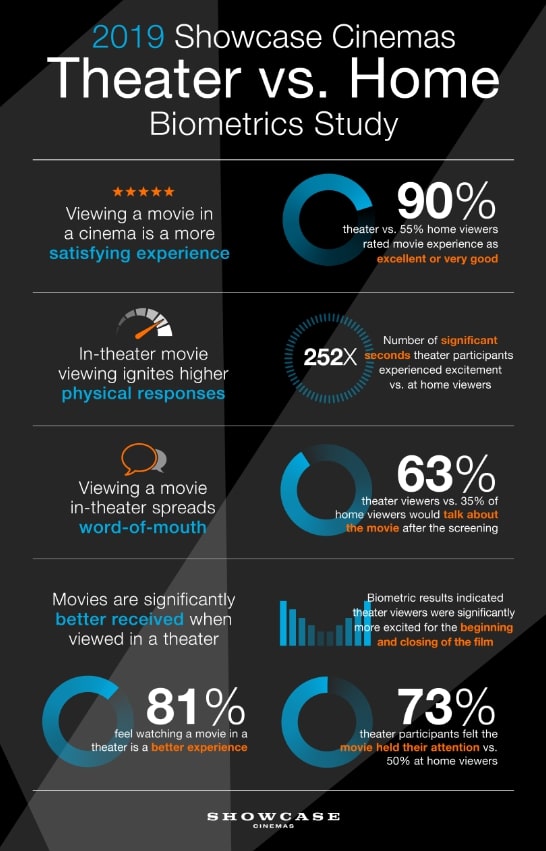 Viewers in a movie theater are more likely to have a better overall experience than those in a home setting, according to the 2019 Showcase Cinemas Theater V Home Biometrics Study. This first-of-its-kind biometrics study examines not only how excited moviegoers felt while watching a movie in a movie theater versus a home setting but also how much more satisfied study participants were with key aspects of watching a movie in-cinema versus a home environment.  This includes satisfaction differences in picture clarity (98% theater/53% home), sound quality (93% theater/33% home), screen size (95% theater/25% home), seating comfort (88% theater/10% home) and atmosphere (85% theater/28% home). 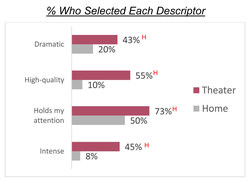 “Those of us in the film exhibition industry have always said that the experience of viewing a movie in a theater was elevated and better than other forms of movie viewing – now we finally have the scientific proof,” says, Mark Malinowski, Vice President of Global Marketing for Showcase Cinemas.  “Just as important, in this age of multiple-platform content consumption, the study proves that viewers of a movie in a theater experience a significantly higher level of excitement than those who view a movie in a home setting.”

Biometrics testing was conducted at Showcase Cinemas XPlus theater in Revere, MA on August 26, 2019 and at Schlesinger Associates in Boston, MA on August 27, 2019. The Showcase Cinemas XPlus screening included 40 study participants along with an additional audience of approximately 145 people to represent a full-capacity film screening.   The home simulation setting included 40 people who, in groups, watched the same film in a simulated home environment.  The home setting was created utilizing couches and a television at a research facility.  Screen size, lighting, seating position, and volume were controlled to closely parallel a home viewing experience.

“‘The Showcase Cinemas Theater Vs Home Biometric Study’ provides a unique lens on how the immersive, large format theater experience can be much more engaging and rewarding to moviegoers,” says Michelle Niedziela, VP of Research & Innovation at HCD Research, who was tapped as a third-party consultancy to conduct the biometric tests. “In-theater viewing has shown to be more emotionally and neuro-physiologically engaging for moviegoers, and there’s a lot of technology and creature comforts that theater companies like Showcase Cinemas have built around the experience to elicit a strong physiological and neurological response. This research shows how impactful that can be on the movie viewer experience.”

For study subjects viewing the film in-theater, levels of neurological excitement proved to increase versus those in the home setting.  This is reflected in the number of significantly higher moments of excitement between theater and home across the film – theater participants had 252 times the amount of significant seconds than home.  In-theater study subjects achieved significantly higher moments of excitement in the theater setting.  Biometric arousal results demonstrated that theater viewers were significantly more excited for the beginning and closing of the film (leaving them on a high).

When asked of both movie-theater and home viewing study participants, a much larger percentage of respondents were satisfied by seeing a movie in a theater when it came to picture clarity, screen size, sound quality, atmosphere and even seat comfort.    Additionally, theater attendees had a significantly better movie-watching experience than those in a home setting with 90% of the theater respondents rating the experience “excellent or very good” versus 55% of the home setting subjects.

When viewed in a theater environment, movies are significantly better received

The study also proved that the environment in which a film is screened attributes greatly to what a viewer feels about the actual movie itself.   This is supported by the fact that movie theater viewers thought “Jumanji: Welcome to the Jungle” was actually a better movie than those who viewed the same film in a home setting.  Even more, those in the theater setting more commonly thought the movie was dramatic, intense and high quality, showing they had a more intense experience, leaving a stronger impression.  Overall, the majority of all respondents (average of 81% of theater and home viewers) felt that it would be a better experience to watch the movie in a theater setting as opposed to at home.  A greater percentage of study participants who viewed a movie in-theater felt that it held their attention (73%) compared to those who viewed the same film in a home setting (50%).

Movie word-of-mouth is crucial to a film’s box office success.   To that point, it is important to note that study respondents who viewed “Jumanji: Wecome to the Jungle” in a theater were much more likely to talk about the movie post the screening versus those study participants who viewed the same movie in a home setting.

The 2019 Showcase Cinemas Theater Vs Home Biometrics Study is a multi-methodology study that presents the findings of an online survey and biometrics research, conducted by HCD Research from August 26-27, 2019 from two groups of 40 participants, age 18-44, comprising 39 males and 41 males.   Biometric sensors were placed on participants’ hand, wrist and collarbone.   Baseline measures were recorded prior to the movie exposure and “Jumanji: Welcome to the Jungle” was played for each group in both the theater and home-viewing settings.  In both settings, research participants were asked not to eat, use their phones, go to the bathroom, etc., in order to minimize distractions and optimize data collection.  Also, the trailer for “Jumanji: The Next Level” was shown before the movie in each setting.

Showcase Cinemas is a world leader in the motion picture exhibition industry, operating more than 918 movie screens in the U.S., U.K., Argentina and Brazil under the Showcase, Cinema de Lux, SuperLux and UCI brands. With 27 theatre locations in the United States, Showcase Cinemas delivers the finest entertainment experience, offering the best in viewing, comfort and dining.  For more information about Showcase Cinemas please visit our website at www.showcasecinemas.com.