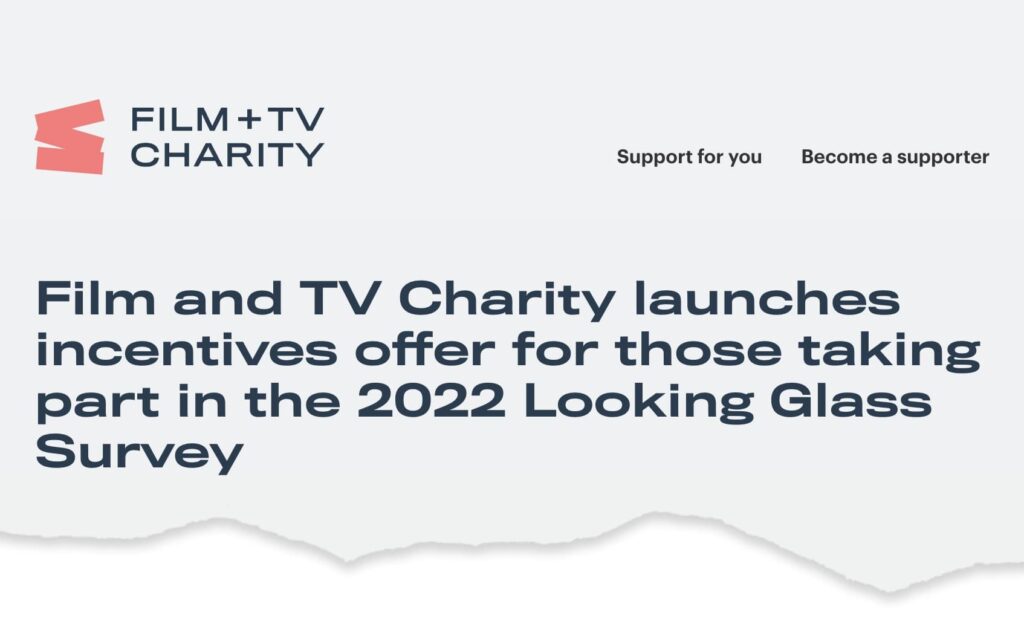 Complete the Looking Glass Survey 22? to be entered into prize draw

Two weeks remain until the closing date for the 2022 Looking Glass Survey, with incentives to encourage participation announced by the Film and TV Charity.

The incentives are being offered because survey fatigue, combined with busy post-lockdown schedules, is having an impact on the survey completion rates.

It’s really important people complete the survey. Data from previous versions of the Looking Glass Survey has led to the creation and development of the Charity’s:

The survey also forms part of the Charity’s ongoing commitment to supporting mental health, tracking changes in attitudes, and spotting areas of improvement or decline.

Providing your contact details and completing the survey will automatically enter you into a prize draw! Please note: We will also draw names from those who have already completed the survey and provided their details.

A three-day pass to one of the most prestigious media events in the industry, The Edinburgh TV Festival. This year’s festival runs from 24th – 26th August and sees more than 60 keynotes, debates and masterclasses, plus scores of networking opportunities. Confirmed keynotes include Brian Cox, the star of multi-awarding winning series Succession, and a masterclass with the team behind BBC’s Ghosts.

Finally, Cineworld has offered an Unlimited Pass for a whole year. This gives the winner access to as many films as they like, plus benefits such as discounts on cinema snacks, advance screenings and much more! Discover more about the Cineworld Unlimited cased here.

Who can fill in the survey?

And we especially want to hear from those from under-represented groups including: