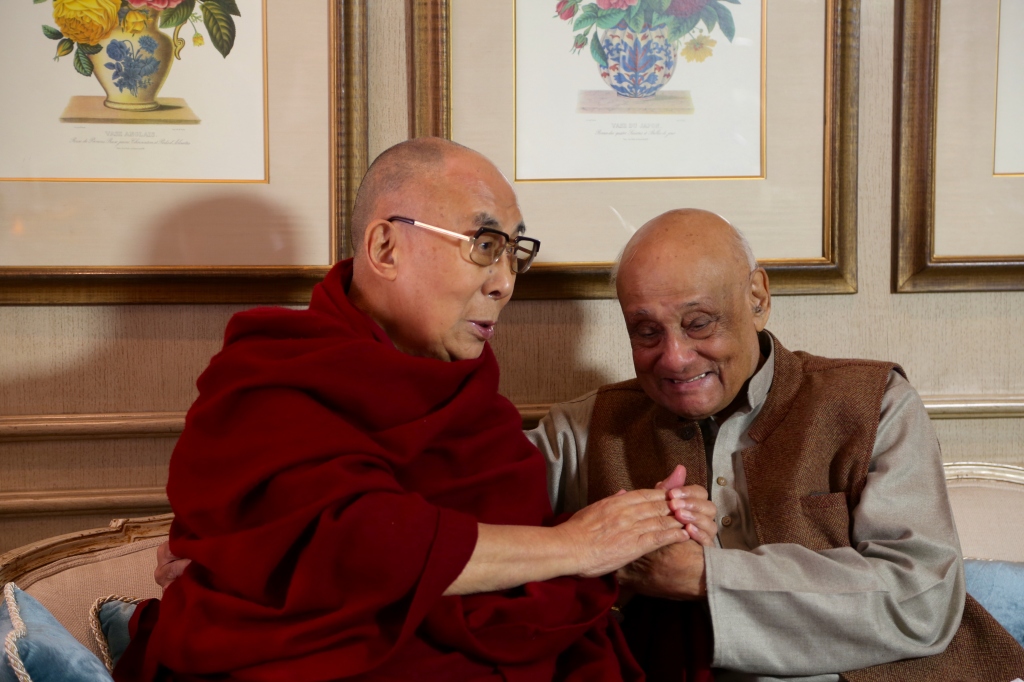 For the first time on film, an exclusive documentary – in theaters March 31 - features the Dalai Lama telling the story of his extraordinary escape from occupied Tibet.

“Never Forget Tibet: The Dalai Lama’s Untold Story,” the feature-length documentary from Compassionate Films, U.K., will celebrate its World Premiere on March 31, in partnership with Fathom Events, at 800 participating theaters across the U.S. The premiere date is very significant as March 31 marks the 63rd anniversary of the Dalai Lama’s escape from occupied Tibet in 1959. This exclusive documentary features the Dalai Lama telling the story of his extraordinary escape from occupied Tibet, for the first time on film, in his own words.

Tickets for “Never Forget Tibet: The Dalai Lama’s Untold Story,” can be purchased here and at participating theater box offices. A complete list of theaters can be found at www.fathomevents.com.

“Never Forget Tibet: The Dalai Lama’s Untold Story” features the Dalai Lama and Har Mander Singh, the Indian political officer who guided him safely to the plains of India. For the first time on film, the two men come together to give their account of the Dalai Lama’s dramatic escape from occupied Tibet. This historic film also explores themes of world history, spirituality, art, culture, and Tibetan Buddhism.

The film carries a powerful spiritual message for our times, offering important insights into the profound depths of Tibetan culture and with it the possibility to bring the world together through love and compassion. In addition to the details of the historic escape, His Holiness imparts messages on the climate crisis, tolerance, and calls for a global revolution of love.

As part of his new Youth Empowerment Program, the Dalai Lama has recorded a personal message for young people and will share a unique dialogue with the next generation of young leaders.

In marking the anniversary, a very special, exclusive opening program will also premiere at the event and will include:

An Opening Ceremony “World Peace Prayer” from Grandmother Fleurdemayo, member of The International Council of Thirteen Indigenous Grandmothers, an international alliance of indigenous female elders, and two short films about global consciousness called “All the One” and “From Chaos to Calm” both of which were filmed on location in Hawaii during the Mauna Kea Volcano Indigenous Rights Gatherings.

This Opening Ceremony starts at 6:30 pm local time, setting the scene for what promises to be a powerful cinematic event unlike any seen before. “Never Forget Tibet: The Dalai Lama’s Untold Story” premieres at 7:00 pm.

Ray Nutt, CEO of Fathom Events, adds “Fathom Events is proud to bring this extraordinary story of one of the world’s most influential refugees and his dramatic escape from occupied Tibet to theaters nationwide. To hear about one of the most significant events in world history directly from the Dalai Lama will be an unforgettable experience for those who see this amazing documentary.”

Director, Jean-Paul Mertinez commented, “We were so honoured to be granted exclusive interviews with His Holiness, members of the Dalai Lama’s family, the Tibetan community in exile and Friends of Tibet. Combined with animated Tibetan artworks, stories, calligraphy, music, historical photographs, and prayers, the film celebrates Tibetan culture and offers rarely seen insights into Tibetan spirituality. It will be a highly moving and inspirational film for those who care about the future of our global society. I am thrilled Fathom Events have created this unique, unmissable Cinema Event with us for everyone to attend the World Premiere in movie theaters nationwide.”

Directed by Jean-Paul Mertinez and Produced by Compassionate Films, U.K., the film’s Executive Producers are Red Rock Entertainment, Templeheart Films and correspondent Rani Singh. The movie is inspired by the book An Officer and His Holiness by Rani Singh.

About Fathom Events
Fathom is a recognized leader in the entertainment industry as one of the top distributors of content to movie theaters in North America. Owned by AMC Entertainment Inc. (NYSE: AMC); Cinemark Holdings, Inc. (NYSE: CNK); and Regal Cinemas, a subsidiary of the Cineworld Group (LSE: CINE.L), Fathom operates the largest cinema distribution network, delivering a wide variety of programming and experiences to cinema audiences in the top U.S. markets and to more than 45 countries.