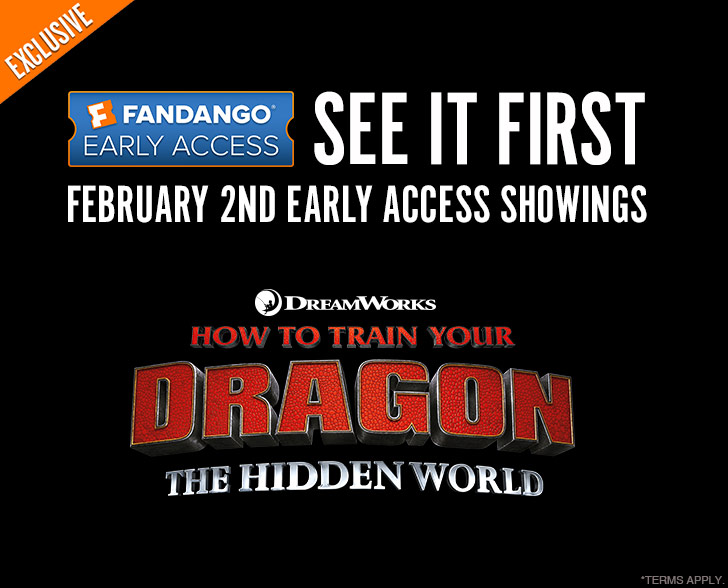 Fans and Fandango VIP Members Can See Final Installment of the Epic “How to Train Your Dragon” Trilogy on February 2 at 1,000 Theaters Nationwide – Tickets on Sale Today

Fandango, the leading digital network for all things movies, is teaming up with DreamWorks Animation to offer exclusive early access screenings on February 2 of “How to Train Your Dragon: The Hidden World,” the third chapter of one of the most beloved animated franchises of all time. Tickets for this limited engagement go on sale today, exclusively for Fandango.

These screenings are among the earliest advance nationwide screenings of a highly anticipated movie from a major studio. Fandango VIP members who purchase tickets for the early access screenings will not only be the first to see the film, but they will also get a free DreamWorks Animation movie to stream at home through FandangoNOW, Fandango’s video streaming service.

“Long-time fans, franchise newcomers and audiences of all ages can’t wait to discover ‘The Hidden World’ on the big screen next month,” says Fandango Managing Editor Erik Davis. “Moviegoers are looking for an epic adventure that the whole family can enjoy, and it’s exciting that Fandango and DreamWorks Animation are giving fans the rare chance to see one of the year’s most anticipated movies three weeks early.”

Voted in a recent Fandango survey by more than 3,500 film fans as one of the most anticipated animated movies of 2019, “How to Train Your Dragon: The Hidden World” is directed by Dean DeBlois, who has directed and co-written every film in the series. In this third chapter of the epic adventure about the unlikely friendship between a Viking boy and his dragon, Hiccup (Jay Baruchel), Astrid (America Ferrera), and Night Fury dragon Toothless discover a hidden world of dragons thought only to exist in myth.

Fandango has a long tradition of working with the studios and filmmakers on programs to surprise and delight moviegoers, and this is the first of multiple early access screenings Fandango is planning for 2019.

For every movie ticket purchased on Fandango, Fandango VIP members also receive 125 Points. Once members reach 500 Points, they will receive a five-dollar reward that can be used for more movies – either for future movie-ticket purchases or for digital-movie purchases and rentals on FandangoNOW. In addition to earning points on Fandango, Fandango VIP members can also link their other theater rewards cards, including AMC Stubs, Cinemark Connections, Regal Crown Club and others, for even more benefits.

Tickets for the film’s February 22 wide release go on sale on Fandango this Friday, January 18.

About “How to Train Your Dragon: The Hidden World”
From DreamWorks Animation comes a surprising tale about growing up, finding the courage to face the unknown … and how nothing can ever train you to let go. What began as an unlikely friendship between an adolescent Viking and a fearsome Night Fury dragon has become an epic adventure spanning their lives. Welcome to the most astonishing chapter of one of the most beloved animated franchises in film history: “How to Train Your Dragon: The Hidden World.”

Now chief and ruler of Berk alongside Astrid, Hiccup has created a gloriously chaotic dragon utopia. When the sudden appearance of a female Light Fury coincides with the darkest threat their village has ever faced, Hiccup and Toothless must leave the only home they’ve known and journey to a hidden world thought only to exist in myth. As their true destines are revealed, dragon and rider will fight together-to the very ends of the Earth-to protect everything they’ve grown to treasure.