Event Film of the Summer and Celebration of the Latinx Community, “In the Heights” to be Released in Cinemas and at Home in Spanish on the TheaterEars App 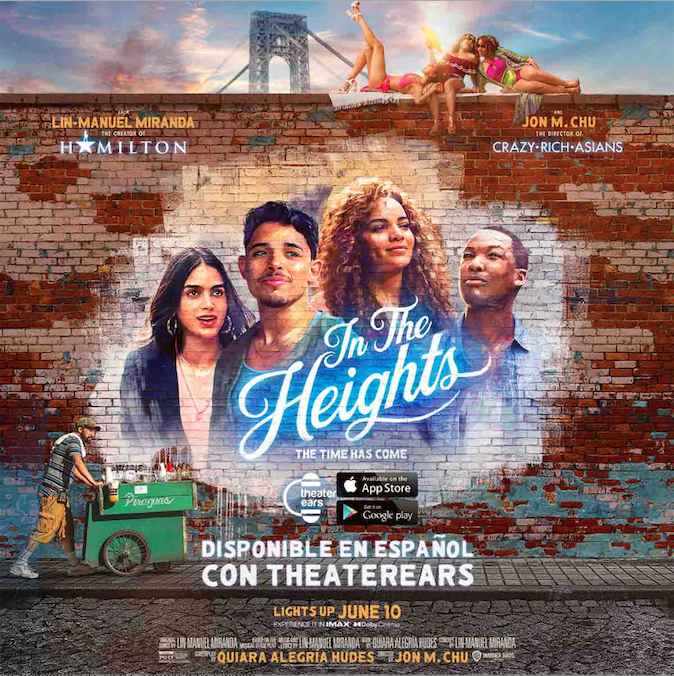 TheaterEars—the app that empowers moviegoers to enjoy a film at the movie theater in Spanish using just their smartphone and earbuds—announced today that Warner Bros.’ highly anticipated summer release “In The Heights” will be available nationwide in Spanish on the TheaterEars app.

Lin-Manuel Miranda, the creator of “Hamilton,” conceived of “In The Heights” as an ode to the tight knit community he grew up in, Washington Heights. Together with Jon M. Chu, the director of “Crazy Rich Asians,” they have crafted a world where the streets are made of music and little dreams, “sueñitos”, become big.

Miranda, who is also the Global Ambassador for TheaterEars, stated, “In The Heights represents the beauty of inclusivity and diversity. Language shouldn’t be a barrier for audiences to enjoy this story. My Abuela Claudia would have been able to benefit from TheaterEars whenever we went to the movies. It did not exist then but it does now. TheaterEars is important to me, the Latinx community, and this movie.”

“Hands down, In the Heights is a cultural moment for the Latinx community,” said Dan Mangru, CEO of TheaterEars. “Being connected to this movie and working with Lin-Manuel Miranda and Warner Bros. has been an immense honor. In The Heights deserves to be seen by everyone regardless of language or venue, which is why it was vital to make this movie available in Spanish both in movie theaters and at home.”

“TheaterEars has been a trusted partner, helping us expand the reach of our movies to Spanish-speaking moviegoers. We are proud to team up with TheaterEars and Lin-Manuel Miranda to bring In the Heights to an even broader audience,” said Jeff Goldstein, President of Domestic Distribution for Warner Bros.

About “In the Heights”
“In the Heights” fuses Lin-Manuel Miranda’s kinetic music and lyrics with director Jon M. Chu’s lively and authentic eye for storytelling to capture a world very much of its place, but universal in its experience. The film stars Anthony Ramos, Corey Hawkins, singer/songwriter Leslie Grace, Melissa Barrera, Olga Merediz, Daphne Rubin-Vega, Gregory Diaz IV, Stephanie Beatriz, Dascha Polanco and Jimmy Smits. Chu directed the film from a screenplay by Quiara Alegría Hudes, based on the musical stage play, music and lyrics by Lin-Manuel Miranda, book by Quiara Alegría Hudes and concept by Miranda. Miranda, Hudes, Scott Sanders, Anthony Bregman and Mara Jacobs produced the film, with David Nicksay and Kevin McCormick serving as executive producers.

Warner Bros. Pictures presents a 5000 Broadway/Barrio Grrrl!/Likely Story/SGS Pictures Production, A Jon M. Chu Film, In the Heights. Slated to open on June 11, 2021 in theaters and on HBO Max, the film will be distributed worldwide by Warner Bros. Pictures. It will be available on HBO Max in UHD, HDR10, Dolby Vision and Dolby Atmos on supported devices for 31 days from theatrical release.