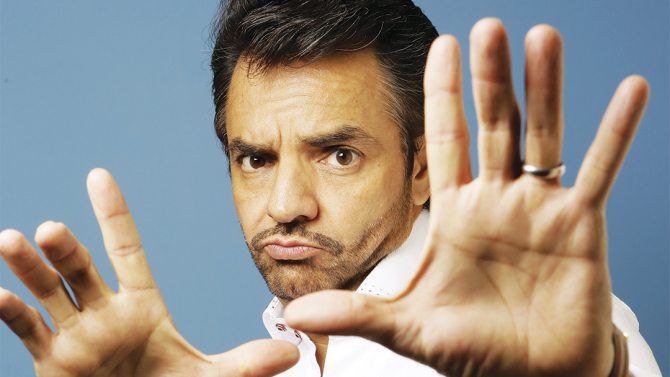 Pantelion and Lionsgate Films "How To Be A Latin Lover" Releases in Theatres on April 28, 2017

Eugenio Derbez will receive the “CinemaCon International Achievement in Comedy Award,” it was announced today by Mitch Neuhauser, Managing Director of CinemaCon. CinemaCon, the official convention of The National Association of Theatre Owners (NATO) will be held March 27-30, 2017 at Caesars Palace in Las Vegas. Derbez will be presented with this special honor at the “CinemaCon Big Screen Achievement Awards” ceremony taking place on the evening of Thursday, March 30, at The Colosseum at Caesars Palace, hosted by the Coca-Cola Company, the official presenting sponsor of CinemaCon.

“Already one of the most influential creative forces in Latin America and with the U.S. Spanish speaking audience, Derbez is sure to gain international attention with his upcoming roles in such films as ‘How To Be A Latin Lover,’ ‘The Nutcracker and the Four Realms,’ and ‘Overboard,’ noted Neuhauser. “We could not be more excited to honor such an accomplished actor, producer, director and writer with this year’s ‘CinemaCon International Achievement in Comedy Award.’”

Derbez will star next month opposite Salma Hayek in the laugh out loud comedy “How To Be A Latin Lover,” releasing on April 28, 2017 via Pantelion Films and Lionsgate. Derbez stars as a very handsome and young Maximo who has a dream to be rich without ever having to work a day in his life. Having made a career of seducing rich older women, he marries a wealthy woman more than twice his age. 25 years later, he gets the surprise of his life when she ends up dumping him for a younger car salesman. Forced out of his mansion and desperate for a place to stay, he must move in with his estranged sister, Sara, (Hayek) and her son, Hugo. Anxious to return to the lap of luxury, Maximo uses his nephew’s crush on a classmate to get to his new target – her grandmother, Celeste, a widowed billionaire. As Maximo tries to rekindle his powers as a Latin lover, he finds himself bonding with his nephew and he begins to learn that being a Latin lover means that loving money isn’t as important as the love of your family.

Actor, writer, director and producer Eugenio Derbez began his career in the theater before transitioning to television where he became the star, writer, director and producer of some of the most popular Spanish language TV shows of all time including “Al Drecho y al Derbez,” “XHDRBZ,” and “La Familia P. Luche.” He has appeared in numerous films including “Sangre de mi Sangre,” “Under The Same Moon,” “Miracles From Heaven,” “Jack and Jill,” and “Girl in Progress.” In 2013 he released the feature film “Instructions Not Included,” which he directed, co-wrote and starred in which quickly became the most successful Spanish-language film ever in the U.S. and worldwide earning over $100 million. Most recently he wrapped production on “The Nutcracker and the Four Realms,” and will appear in the upcoming release “Geostorm.” Under his production banner, 3pas Studios, he has first look deal with Pantelion and Lionsgate. Derbez’s upcoming slate includes “How To Be A Latin Lover,” and “Ponce.” Other upcoming projects include remakes of the Argentinian comedy “Un Cuento Chino,” the French comedy “The Valet,” and a reimagining of the American romantic comedy “Overboard,” a co-production between MGM and Pantelion.