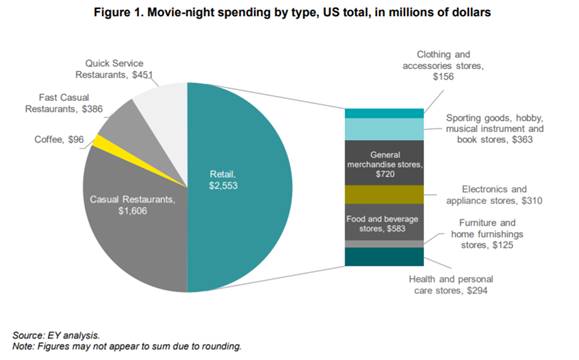 Moviegoers drive $5 billion in spending to nearby business

As movie theaters rebound from the pandemic, they will also drive the recovery of surrounding businesses, a new study shows.

Ernst & Young today released a detailed analysis focused on the broader economic impact of movie theaters. The study, Economic Contributions of the US Movie Theater, commissioned by the National Association of Theatre Owners (NATO), analyzed pre-pandemic data from 2019 to understand the economic value of movie theaters to their communities as they look to recover after facing shutdowns, capacity restrictions, and an intermittent lack of new releases.

“This study makes it very clear that the recovery of movie theaters will help so many other businesses rebound as well,” said John Fithian, NATO’s President & CEO. “Movie theaters are the essence of the communal experience and they are essential to the economic health of their communities.”