Drive-in Movies Off to a Flyer! 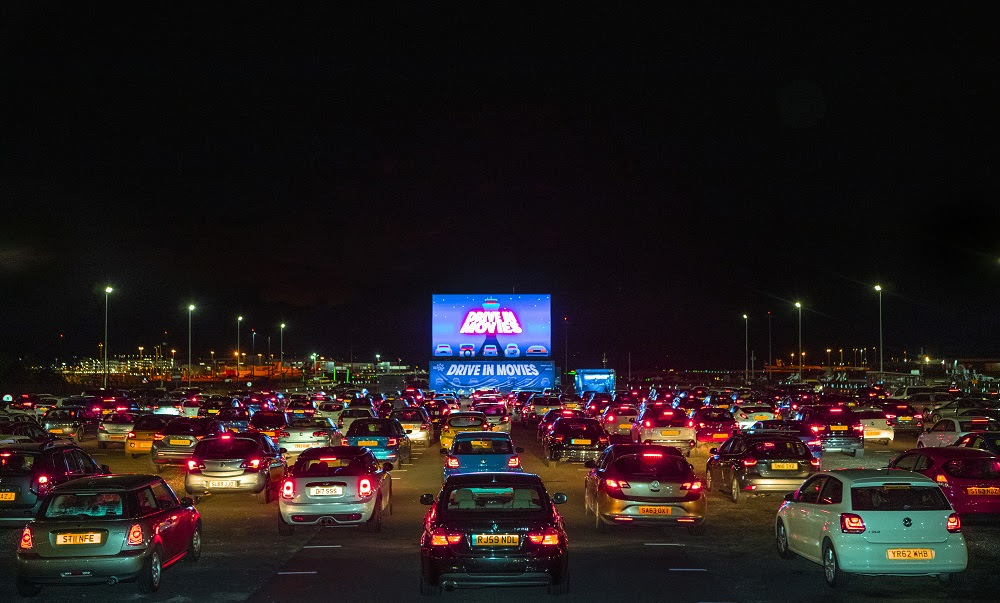 First titles for the September event are confirmed

Edinburgh International Film Festival and Unique Events, organisers of Edinburgh’s brand new Drive In Movies event have hailed the opening weekend a huge success, with audiences of over 4,000 people flocking to Edinburgh Airport to experience a 4-day outdoor cinema extravaganza, supported by Edinburgh Live, for people of all ages which included family favourites, all-time classics and thrilling blockbusters.

Tickets for the next Drive-in Movies (24 – 27 September) are now on sale at edinburghdrivein.co.uk with another packed programme of cinema classics including “Back to the Future”, “Ferris Bueller’s Day Off”, “Mamma Mia!”, “Rocketman”, “Toy Story” and “Mean Girls”, among others.

The opening weekend of Drive-in Movies saw thousands of people from Edinburgh and Lothians enjoying a fantastic outdoor cinematic experience in the comfort of their own vehicles and in the unique surroundings of Edinburgh Airport. Strictly following the health and safety regulations and the Scottish Government’s advice, Drive-in Movies offered a safe and fun environment for people of all ages to experience what was the first post-lockdown outdoor event for many.

A top-notch selection of films was shown on a state of the art 100sqm LED screen, one of the largest mobile screens in the world with the audio broadcast straight to cars, for audiences to control the soundtrack. Audiences sang along to “Sunshine on Leith” and “Grease”, shed a tear at “Up”, fell in love during William Shakespeare’s “Romeo + Juliet” and enjoyed the planes landing and taking off nearby which was a particular treat at the screenings of “Con Air” and “Airplane!”

Prior to each film, audiences had a chance to sample some of the best fish and chips in the country from seafood specialists Alandas and those not behind the wheel, Edinburgh-based award-winning brewery’s Cold Town Beer. Nairn’s Oatcakes distributed their ever-so-popular Oat Bars as a special treat for families who came to see Up and Mary Poppins Returns. Popular Edinburgh DJ Stewart Calverto became Captain Calverto as he warmed up the crowds with car disco and quizzes with spot prizes.

Audiences took to social media to share their views of the event:

‘Had an epic time tonight at seeing alien at #EdinburghDriveIn, great set up’

‘brilliant night out at #EdinburghDriveIn’

‘Dreamy night at the drive-in. Thank you for the brilliant escape @edfilmfest @UniqueEventsltd’

Drive-in Movies continues during the last weekend of every month for the rest of the year. September dates are confirmed as 24 to 27 September and the organisers are now pleased to reveal first titles for the event, an exciting selection of cult films and blockbusters: “Back to the Future” (1985) with some of the most recognisable lines and the inimitable Michael J. Fox and Christopher Lloyd, “Big Trouble in Little China” with Kurt Russell (1986), John Hughes’ “Ferris Bueller’s Day Off” (1986), all-time family favourite “Toy Story” (1995), teen comedy classic “Mean Girls” (2004), “Drive” (2011) with Ryan Gosling, and more recent hits, a homage to ABBA featuring Meryl Streep, “Mamma Mia!” (2008), Spike Lee’s “Blackkklansman” (2018), “Incredibles 2” (2018) and Elton John’s biopic, “Rocketman” (2019). Tickets are on sale now at edinburghdrivein.co.uk

About Edinburgh International Film Festival
Established in 1947, Edinburgh International Film Festival is renowned around the world for discovering and promoting the very best in international cinema – and for heralding and debating changes in global filmmaking. Intimate in its scale, ambitious in its scope, and fuelled by pure passion for cinema in all its manifestations, EIFF seeks to spotlight the most exciting and innovative new film talent, in a setting steeped in history. Notable films premiered in recent years have included: “Bait”, “The Souvenir”, “Cold War”, “Calibre”, “God’s Own Country”, “Hunt for the Wilderpeople”, “Amy”, “Inside Out”, “45 Years”, “A Most Wanted Man”, “Cold in July”, “The Imposter”, “Brave”, “Tabu”, “The Hurt Locker”, “Moon”, “Fish Tank”, “Let the Right One In”, “Manon Wire”, “Control”, “Knocked Up”, “Ratatouille”, “Little Miss Sunshine” and “Billy Elliot”.

The Edinburgh International Film Festival Limited is a company registered in Scotland No: SC132453. It is a subsidiary of the Centre for the Moving Image (CMI) which is a company limited by guarantee with charitable status with Scottish Charity No. SC006793. The Centre for the Moving Image (CMI) was established in 2010 with a mission to be at the forefront of the development of a vibrant and successful film and moving image industry and culture across Scotland and beyond. The CMI currently comprises EIFF, Filmhouse in Edinburgh and the Belmont Filmhouse in Aberdeen.

Unique Events is Scotland’s leading events and festivals creation company, and have created a huge range of events throughout Scotland and the UK, from sports gatherings to street parties, classical music to rock/pop festivals; an unparalleled range of indoor and outdoor, ticketed and free events. Unique specialises in large-scale outdoor public events and festivals working closely with government agencies, local authorities and enterprise companies as well as the private sector. With over 20 years’ experience within the event and music industry, Director’s Alan Thomson & Penny Dougherty have a small, dedicated full-time team engaged throughout the year on a selected portfolio of projects working with Scotland’s top freelance Event Producers to deliver specific events. Unique Events have created and produced a huge portfolio of high profile events such as Edinburgh’s Hogmanay, Official Opening of the Queensferry Crossing, Edinburgh’s Burns&Beyond Festival, Film in the City outdoor cinema screenings for Edinburgh International Film Festival, Illuminight at Dean Castle Country Park and in the last 3 years helped raise over £18M for homeless charities through the Sleep in the Park and World’s Big Sleep Out events.