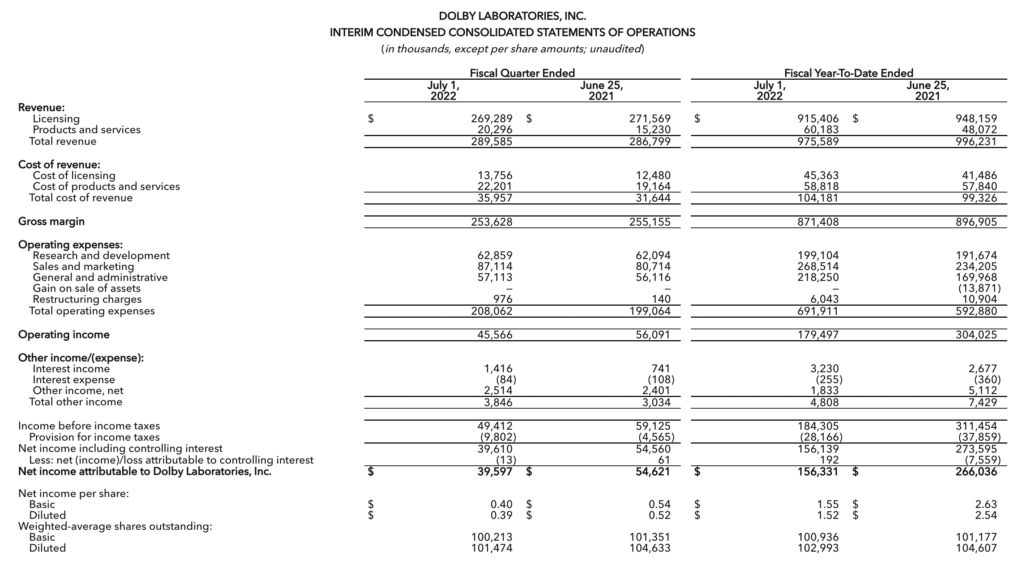 “While the macroeconomic environment remains uncertain, we are focused on executing on our growth initiatives and remain confident in our long-term opportunity,” said Kevin Yeaman, President and CEO, Dolby Laboratories. “We continue to grow the adoption of Dolby Vision and Dolby Atmos across a broadening set of use cases, highlighted this quarter by important wins in mobile with Dolby Vision capture, and in music and automotive with Dolby Atmos.”

Impact of Recent Events
Dolby’s financial results for the third quarter of fiscal 2022 rely on estimates of royalty-based revenue that take into consideration the macroeconomic effect of certain events, including COVID-19, supply chain constraints, and consumer demand for electronic products. In addition, our actual results could differ materially from the estimates we are providing below due in part to the increased uncertainty resulting from these items as well as the geopolitical instability in Europe and continuing concerns around inflation. The uncertainty resulting from these factors has greatly reduced our visibility into our future outlook. To the extent possible, the estimates we are providing for future periods reflect certain assumptions about the potential impact of certain of these items, based upon a consideration of currently available external and internal data and information. These assumptions are subject to risks and uncertainties. For more information, see “Forward-Looking Statements” in this press release for a description of certain risks that we face, and the section captioned “Risk Factors” in our Quarterly Report on Form 10-Q for the third quarter of fiscal 2022, filed on or around the date hereof.

Dividend
Today, Dolby announced a cash dividend of $0.25 per share of Class A and Class B common stock, payable on August 31, 2022, to stockholders of record as of the close of business on August 23, 2022.

Stock Repurchase Program
Today, Dolby also announced that its Board of Directors has approved increasing the size of its stock repurchase program by $350 million, bringing the amount available for future repurchases of its Class A Common Stock to approximately $581 million. Stock repurchases under this program may be made through open market transactions, negotiated purchases, or otherwise, at times and in amounts that the company considers appropriate.

Financial Outlook – Full Year of Fiscal 2022 and Fourth Quarter of Fiscal 2022
We have lowered our outlook to reflect the impact of the macroeconomic environment, primarily on our estimates for the mobile, broadcast, and PC markets.

Dolby is providing the following estimates for its full year fiscal 2022:

Dolby is also providing the following estimates for its fourth quarter of fiscal 2022:

See here for the full report.

About Dolby Laboratories
Dolby Laboratories (NYSE: DLB) is based in San Francisco, California with offices around the globe. From movies and TV shows, to apps, music, sports and gaming, Dolby transforms the science of sight and sound into spectacular experiences for billions of people worldwide. We partner with artists, storytellers, developers, and businesses to revolutionize entertainment and communications with Dolby Atmos, Dolby Vision, Dolby Cinema, and Dolby.io.

Dolby, Dolby Atmos, Dolby Vision, Dolby Cinema, Dolby.io, and the double-D symbol are among the registered and unregistered trademarks of Dolby Laboratories, Inc. in the United States and/or other countries. Other trademarks remain the property of their respective owners.