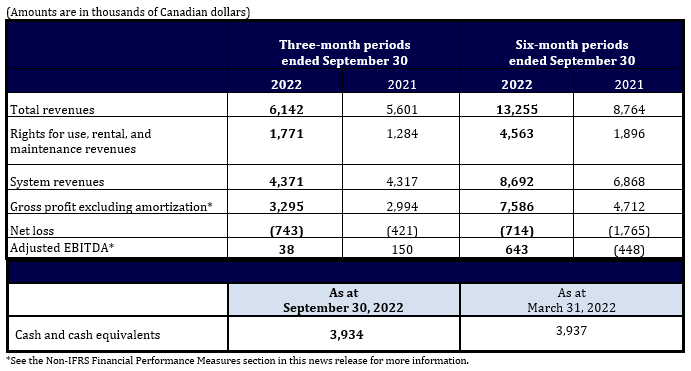 “Fiscal 2023 is shaping up to be a strong year for D-BOX,” said Sébastien Mailhot, President and Chief Executive Officer of D-BOX. “During the second quarter, we launched G5, our latest generation of haptic systems, and continued our rollout with Cinemark by expanding our footprint with that partner to nearly 300 screens in the United States through the signing of 36 additional auditoriums. Our second quarter revenue was up 10% over the same quarter last year and would have been higher if several systems orders had not been pushed to the third quarter. As a result, we are looking forward to a strong second half. Our order book is at its highest level since the beginning of the pandemic and the upcoming movie slate includes highly anticipated sequels, “Black Panther: Wakanda Forever” and “Avatar: The Way of Water.”

“This is an exciting time for D-BOX. With its new architecture, our G5 system is easier to deploy and enables the seamless integration of our haptic technology in many more devices, allowing us to target a much larger addressable market. We’re also continuing to advance collaborations with leading players in the videogaming and sim racing markets and look forward to providing updates in the near future as they happen. At the same time, we remain focused on strengthening our leadership position in the theatrical market and recently announced additional Hoyts locations in Australia, increasing our backlog to 69 auditoriums awaiting installation,” Mr. Mailhot added.

“Our second quarter results were tempered by the timing of revenue recognition, as well as supply chain challenges, as several systems orders we were expecting to fill during the quarter will now be delivered in the third quarter” said David Montpetit, Chief Financial Officer of D-BOX. “Our cash position and overall balance sheet remain strong. And given the improved cash flows from operations, we have ramped up our inventory to meet demand, as orders are fully booked for the third quarter and substantially filled for Q4.”

Second Quarter Overview
Total revenues for the quarter increased 10% to $6.1 million, driven by a 38% increase in rights for use, rental and maintenance revenues, which amounted to $1.8 million and benefited from the reopening of movie theaters and the release of major films in the early part of the summer. Systems sales revenue increased 1% to $4.4 million compared with $4.3 million for the same period last year.

Gross profit excluding amortization related to cost of goods sold increased to $3.3 million from $3.0 million for the same period last year. Gross margin excluding amortization remained stable at 54% as the growth of rights for use, rental and maintenance revenues, which generate a higher margin, were partially offset by the increased cost of components and transportation in system sales revenues.

Research and development expenses increased by 15% to $0.7 million, or 12% of revenues, from $0.6 million, or 11% of revenues, for the same period last year. The increase is a result of projects related to the next generation of actuators and software development
Net loss for the quarter was $0.7 million (basic and diluted net loss of $0.003 per share) compared with a loss of $0.4 million in the second quarter a year ago.

Adjusted EBITDA amounted to $0.04 million, down from $0.2 million in the same quarter last year. However, it marked the fifth consecutive quarter of positive adjusted EBITDA for the Corporation.

At quarter-end, D-BOX had a cash position and undrawn credit facilities totaling $6.6 million.

About D-BOX
D-BOX creates and redefines realistic, immersive entertainment experiences by moving the body and sparking the imagination through effects: motion, vibration and texture. D-BOX has collaborated with some of the best companies in the world to deliver new ways to enhance great stories. Whether it’s movies, video games, music, relaxation, virtual reality applications, metaverse experience, themed entertainment or professional simulation, D-BOX creates a feeling of presence that makes life resonate like never before. D-BOX Technologies Inc. (TSX: DBO) is headquartered in Montreal with offices in Los Angeles, USA and Beijing, China. Visit D-BOX.com.