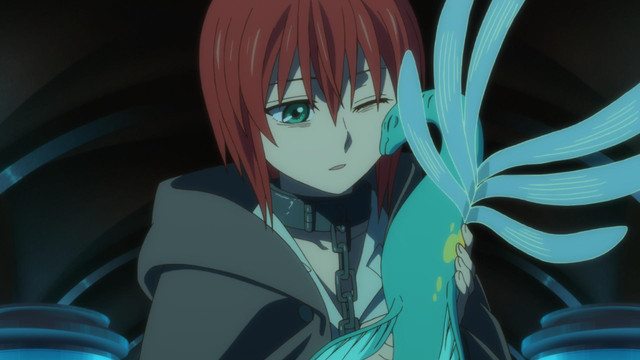 Crunchyroll, the leading destination for anime and manga, today announced a special sneak peak of “The Ancient Magus’ Bride,” followed by a Q&A with its director and Wit Studio’s president for a limited number of attendees as a part of their exciting line up for this year’s Anime Expo. In addition, tickets for the corresponding July 26 Anime Movie Night theater events are now widely available to fans across the country at animemovienight.com.

This year Crunchyroll will have its biggest presence at Anime Expo ever, and will be taking over a 16,000 square foot concourse jam-packed with activations for fans to enjoy, including “The Ancient Magus’ Bride” chalk art drawing, “Yuri!!!” On ICE photo opportunities, a cosplay gallery featuring costumes from Adam Savage, game room and more.

Fans can expect a host of events and activities to enjoy at the Anime Expo:

Crunchyroll will host the world premiere screening of “The Ancient Magus’ Bride” with its creators, director Norihiro Naganuma and Wit Studio’s head George Wada, to a limited audience at Anime Expo. All fans who cannot attend at the convention are encouraged to get tickets for the one-day event on July 26 in select theaters across the nation. Anime fans will now be able to purchase tickets to their local screening event on Anime Movie Night’s official website.

Coming off the heels of a successful inaugural Anime Movie Night screening event this spring, Crunchyroll, with the help of Screenvision Media and KAOS Connect, will screen the first three episodes of “The Ancient Magus’ Bride”, a series adapted from the wildly popular manga of the same name. Fans in attendance will have the opportunity to screen the episodes months before they air in Japan, as well as never-before-seen content before the screening. At the screenings, fans will be able to enjoy the exclusive theatrical release of the show on the big screen for its nationwide debut, and before it is made available on the Crunchyroll platform.

“The Ancient Magus’ Bride” has been long awaited by fans who made the OVA prequel episodes of the series some of the most popular content on the Crunchyroll platform. The beautifully animated series follows heroine Hatori Chise, whose life is forever changed when she fatefully encounters a stranger with the head of a beast, wielding strange powers. The series has incredible veteran talent attached, and is produced by fan-favorite Wit Studio, the animation studio who brought blockbuster anime hit “Attack on Titan” to the masses.

Attendees can also expect to be treated to other special Crunchyroll content extras, and the premiere and behind-the-scenes look at the creation of Crunchyroll’s first-ever original short “Children of Ether.” “Children of Ether” is a collaboration with creator LeSean Thomas (“The Boondocks,” “Cannon Busters”), who directed the project himself. The project boasts an impressive staff, including character designer Hiroshi Shimizu (“Michiko & Hatchin”), storyboard director Shingo Natsume (“One Punch Man”), animation director Yûichi Takahashi (“Gatchaman Crowds Insight”) and animator Mitsuo Iso (“Neon Genesis Evangelion”). “Children of Ether” tells the story of Rhonda, a woman with a dark past and a mysterious power, as she journeys through a decaying, dystopian metropolis populated by raiders, gangs and the supernatural.

“Our first screening was a resounding success,” said Kun Gao, General Manager of Crunchyroll. “The overwhelmingly positive response to the first screening validates what we’ve always known to be true at Crunchyroll—that our community is hungry for ways to interact with one another and their favorite content outside of their personal devices. We can’t wait to fill theaters around the country once again with like-minded fans to celebrate quality anime and the community that surrounds it. We’re grateful to our partners Screenvision Media and KAOS for helping to make that vision a reality for the second time, with the screening of The Ancient Magus’ Bride.”

“Crunchyroll’s community is passionate, and they really showed up for our inaugural Anime Movie Night event,” said Dan Diamond, Managing Partner of KAOS Connect. “This series exemplifies what makes Event Cinema so magical—it provides an opportunity for a community of fans to connect in-person around the premium content that they love with an exclusive viewing experience. We look forward to the next installment!”

About Crunchyroll
Crunchyroll is the official destination for the largest and latest lineup of anime as well as popular drama and manga. Crunchyroll brings hit shows like Naruto Shippuden, Attack on Titan, and One Piece to millions of viewers around the world and allows them to purchase related merchandise through its online store. Through its app on game consoles, set-top boxes, mobile devices and more, Crunchyroll delivers content from leading Asian media producers directly to viewers translated professionally in multiple languages. The service is available for free or through a premium offering that allows users to watch ad-free with access to simulcasts—top series available immediately after Japanese broadcast. Fans can also view Crunchyroll on VRV, a platform that aggregates content appealing to Crunchyroll fans. Crunchyroll is owned by Ellation, with majority investment from Otter Media, a joint venture between AT&T and The Chernin Group. Crunchyroll has offices in San Francisco and Tokyo, and is a member of the Association of Japanese Animations (AJA). For more information, visit http://www.crunchyroll.com or http://www.vrv.co.

About KAOS Connect, LLC
Headquartered in Denver, CO, KAOS Connect is the next step in the evolution of the event experience, making events more accessible and engaging both on–and beyond–the Big Screen. By transforming ordinary content into extraordinary experiences, KAOS connects people, organizations, brands and content worldwide. Owned and operated by two seasoned media executives, Shelly Maxwell and Dan Diamond have been credited with the success of creating and building the world’s preeminent EVENT CINEMA business as they transformed movie theatres into places where communities could gather together to experience unique entertainment and infotainment, not just traditional films. For more information: http://www.kaosconnect.com.