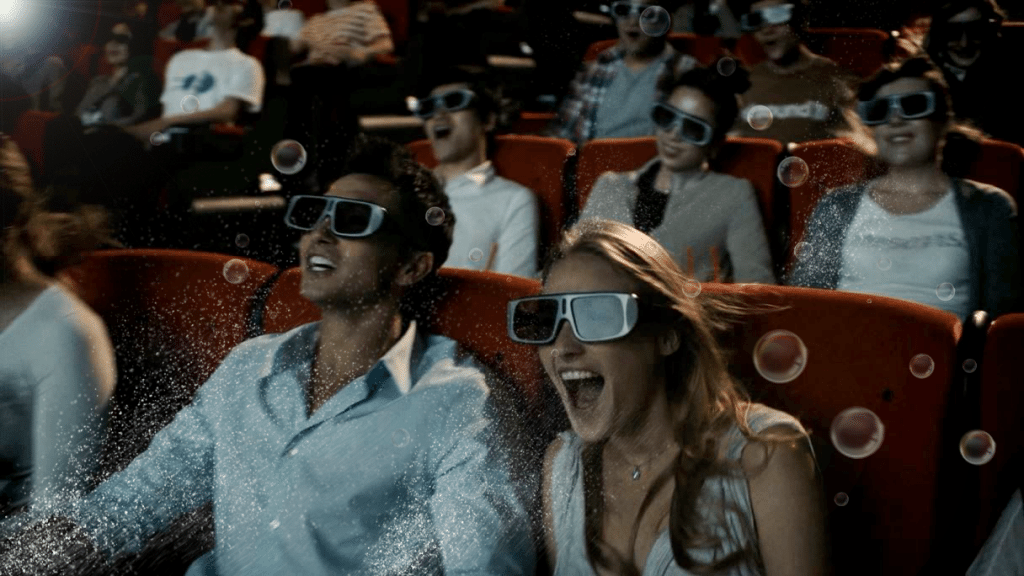 CJ CGV (www.cgv.co.kr), a total cinema solution provider, is exhibiting at CinemaCon (BOOTH 2003A) for the first time under its corporate banner. This comes following several successful years focused on introducing its 4DX and ScreenX brands to the international cinema market, and subsequent growth of these businesses, around the world.

In addition to the latest advances and developments with 4DX – the multisensory cinema technology with motion and environmental effects – and ScreenX – the world’s first 270-degree, multi-projection system used within a theatre setting, CJ CGV will be demonstrating its newest addition to the immersive cinema universe: “4DX VR.” This new innovation will provide attendees with a peak at a prototype that may very well be a major influence on the future of the immersive entertainment, marrying virtual reality with the company’s proprietary 4-D technology. This is part of an evolution of experience that CGV is continuously developing, aligned with the company’s “Cultureplex” philosophy of an entertainment hub that offers multifold experiences beyond cinema.

CJ CGV, which is also celebrating its 20th Anniversary, and is the world’s top-five multiplex theatre company operating 2,589 screens at 332 locations in seven countries, aims to spread the success achieved in Korea to global players. This includes offering its suite of advanced cinema solutions – including CRM (Customer Relation Management), NOC (Network Operation Center), TMS (Theater Management System) and PhotoTicket products – to outside exhibitors for the first time.

“This year is the perfect timing for us to join the world’s largest convention of the cinema industry, as CGV has always had plans to grow worldwide, with our big vision to be a leader in the global marketplace,” said Jung Seo, CEO of CJ CGV. “Our partners for premium theatre platforms, 4DX and ScreenX, are seeing tremendous ROI from offering these immersive experiences bring to their customers, and we look forward to continuing to pave the way forward, leading the paradigm shift in the future of cinema.”

Since last year’s CinemaCon during which 4DX and ScreenX offerings were showcased, CGV has successfully expanded around the world, in particular throughout Japan, China, Europe and the U.S. This included premiering the first full-length feature films to utilize the ScreenX format, and surpassing the milestone of 200-plus screens and 30,000 seats with 4DX installations, including the recent opening of the first 4DX screen in New York through a partnership with Regal.

4DX VR makes CinemaCon debut
This new innovation will be on display for the first time at the 4DX CinemaCon booth. VR is having a banner year with consumer products rolling out and content creation on the rise. 4DX is figuring out a way to combine both of these immersive technologies into one extremely immersive experience. All visitors to CJ CGV’s booth can experience three VR contents.

4DX sees rapid expansion worldwide with most recent debut in New York City
As of April 2016, 4DX is operating screens in 233 auditoriums across 37 countries, up from 170 auditoriums in 33 countries at this time last year. More than 30,000 seats have been installed worldwide, far more than the nearest 4D theatre technology competitor. Since last year’s CinemaCon, 4DX screens opened up in the New York City (Regal Union Square Stadium 14 with the Regal E-Walk 13 opening on April 28) and Chicago (Marcus Gurnee Mills Cinema) markets and 25 new sites were added in Japan, with the first 4DX screen debuting in Turkey. As well, deals were signed to expand 4DX into Portugal and the Rep. of South Africa for the first time and significantly grow its presence in China, the UK, Switzerland and elsewhere. The latest blockbuster film to have 4DX success is Batman v Superman, which saw U.S. seat occupancy rates of 91 percent on opening weekend.

ScreenX comes to the U.S. and China and shows first full feature films
Since making its U.S. debut at CinemaCon last year, the number of ScreenX installed sites also saw a jump as the technology opened its first eight screens in China (through a partnership with Wanda), one screen in Major Cineplex, Thailand and sites in Los Angeles and Las Vegas debuted to the public, the latter at the AMC Town Square 18, where demos of ScreenX will be held for CinemaCon attendees. ScreenX has seen significant success with its Asian business beyond South Korea, with plans for additional expansion in the works: It will unveil upcoming full featured films lineup exclusively to the press coming to the ScreenX demo session at AMC Town Square 18.

Also for the first time, ScreenX has successfully screened feature length films in the format. Six films were made available to excited movie-goers worldwide over the past 12 months, including two in the U.S. – hit Korean film “The Himalayas” and the Chinese blockbuster adventure “Mojin: The Lost Legend.” In China, “Mojin: The Lost Legend” recorded an impressive 82.7% average seat occupancy rate on opening weekend.

So far, with a large number of multinational companies recognizing ScreenX’s attentive and immersive experience, more than 100 screen commercials have been created in ScreenX format. Having screened its first full-length feature films successfully in Korea, China, and the U.S., ScreenX is now accelerating its expansion of footprint to the commercial feature film area, by advanced discussions with major studios, film producers, and cinema operators.

Executives from CJ CGV will be on hand to meet with current and potential partners from Hollywood studios as well as exhibition companies and press at CinemaCon BOOTH 2003A.

About 4DX
4DX is the first and leading 4D cinema technology for feature films, providing moviegoers with an immersive cinematic experience that utilizes all five senses, allowing the audience to connect with movies with motion, vibration, water, wind, snow, lighting, scents, and other special effects that enhance the visuals on-screen.  Each 4DX auditorium incorporates motion-based seating synchronized with over 20 different effects and optimized by a team of skilled editors, maximizing the feeling of immersion within the movie, beyond the limits of audio and video. Since 2009, more than 290 Hollywood titles have been screened in 4DX with 4DX codes created for both major Hollywood blockbusters and local titles. As of April 2016, 4DX reaches over 30,000 seats in operation of screens in 233 auditoriums across 37 countries. For more information, please visit www.cj4dx.com or www.facebook.com/4dxusa.

About ScreenX
ScreenX is the world’s first multi-projection system used within a theatre setting.  It was created in 2012 by CJ CGV, part of South Korean conglomerate CJ Group, as one of the “next cinema formats” along with 4DX, the multisensory cinema technology with motion and environmental effects. ScreenX allows moviegoers to go beyond the frame of the movie screen by utilizing a proprietary system that expands images of feature films and pre-show advertising to create an immersive, panoramic, 270-degree format that projects onto three theatre walls. To date, ScreenX has been installed in on 91 screens around the world, including 80 screens at 48 locations in South Korea; eight screens in China; two in the United States; and one in Thailand.

About CJ CGV
CJ CGV is the largest multiplex cinema chain in South Korea, and the world’s Top 5 cinema exhibition company present in China, Vietnam, Indonesia, Myanmar, Turkey and the United States. CGV is a subsidiary of CJ Group, Korea’s leading diversified conglomerate with presence in the food and food service, pharmaceutics and biotechnologies, entertainment and media, home shopping, and logistics industries. As of April 2016, CJ CGV is operating 2,589 screens at 332 locations in 6 countries around the world. It was able to secure long-term competitiveness via endless efforts and investment in global market which contributed to established the backbone to become and solidify as the top multiplex chain in Asia. The company emphasizes and constantly develops new movie technologies such as 4DX and ScreenX, and its own cinema solutions including CRM, NOC & TMS and PhotoTicket.