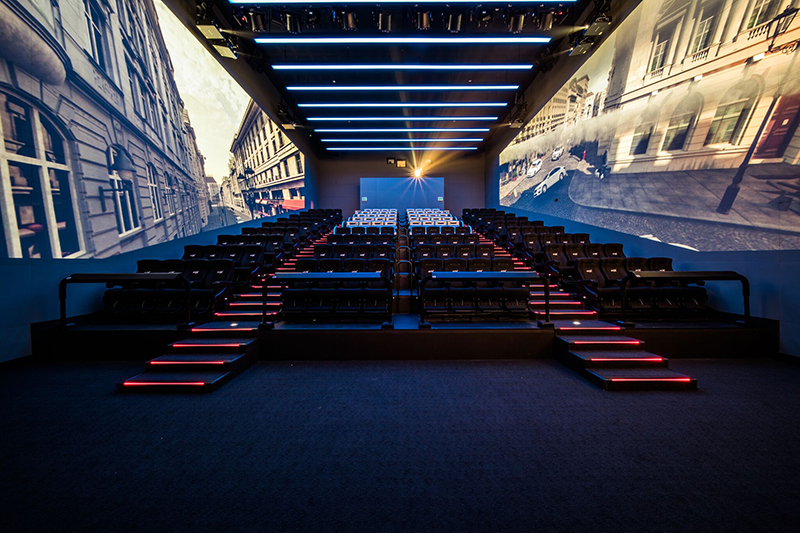 CJ 4DPLEX, the world’s leading cinema technology company, is celebrating 10 years of cinematic innovation by bringing new advancements to the future of theatre exhibition with “4DX with ScreenX,” “4DX Recliner,” “4DX VR Disk & Racing” and “4DX Flying Cinema”. The new advancements and concepts will be showcased at CinemaCon, April 1-4 in Las Vegas. CJ 4DPLEX booth will be located at the Roman Ballroom I, Promenade Level at Caesars Palace.

At its seventh consecutive appearance at CinemaCon, the company will showcase new advancements that will highlight the company’s dedication in pursuing “The Next Phase in Cinematic Innovation”:

CJ 4DPLEX is introducing a new immersive 4DX line, “4DX Recliner”, a motion base that can be added to existing recliners, offering a more comfortable and private movie watching experience to audiences. This new tech allows exhibitors to repurpose auditoriums with existing recliner seats by adding a 4DX motion base. The motion base comes with three movements of heave (up and down), roll (left and right) and pitch (tilt backward and forward) with an additional option to add swing and yaw movement (twist left and right). 4DX Recliner’s premium cinema lineup offers a unique and comfortable experience that is adaptable to a variety of seating options, including dual seating for a more cozy, private viewing experience. An optional fence installation is also available and comes equipped with the wind module on the sides of the fencing.

Combining the fast-growing 4DX and ScreenX cinema formats, “4DX with ScreenX” is a remarkable, one-of-a-kind experience that is a blend of 4DX’s motion and environmental effects coupled with the visual immersion of ScreenX. The latest technology launch of CJ 4DPLEX is rapidly growing in popularity and received an overwhelmingly positive response from the industry at its unveiling at last year’s CinemaCon.

Four types of 4DX motion chair models will be showcased at this year’s ‘4DX with ScreenX’ booth. This year’s new model seat comes equipped with two new additions: the all new modular Effect Package and the Smart Scent technology to enhance the moviegoing experience further.

4DX VR Racing is a multiplayer driving simulator that allows up to sixteen players to race against the clock and go head-to-head in real time.

4DX VR Disk is a groundbreaking motion platform and interactive VR technology taking virtual reality to a whole new level. The 360-degree rotation motion along with the addition of the interactive gun shooting component provides an amazing replay value for players to return to again and again.

CJ 4DPLEX is taking 4DX beyond the auditorium with 4DX VR Interactive Racing and 4DX VR Disk. 4DX VR will bring additional revenue opportunities by allowing patrons to experience lobby entertainment systems, either before or after they watch a feature film.

“With the many challenges that are currently facing theatrical exhibition, innovation is more important than ever, and is at the core of CJ 4DPLEX’s vision,” said JongRyul Kim, CEO of CJ 4DPLEX. “4DX and ScreenX technologies have been rapidly reshaping the industry standard and laying the groundwork for a bright future for exhibition around the world, providing exhibitors with new revenue opportunities and giving moviegoers a highly-engaging premium experience that inspires them to return to the theatre again and again.”

CJ 4DPLEX is a leading, next-generation cinema technology company, headquartered in Seoul with international offices in Los Angeles and Beijing. The company has created immersive film technologies for theaters worldwide that include ‘4DX’ and ‘4DX with ScreenX’ for consumers to experience films in ways that were never before possible. 4DX provides moviegoers with an immersive, multi-sensory experience, allowing the audience to connect with movies through motion, vibration, water, wind, snow, lightning, scents, and other special effects that enhance the visuals on-screen. Each 4DX auditorium incorporates motion-based seating synchronized with 21 different effects and optimized by a team of skilled editors, maximizing the feeling of immersion within the movie, beyond the limits of audio and video. More than 640 Hollywood and local titles have been screened in 4DX. To date, more than 73,000 4DX seats operate in 628 auditoriums, spanning 63 countries. CJ 4DPLEX was named a Most Innovative Company of 2017 and 2019 in Live Events by Fast Company, and its technology has been recognized with Silver at the Edison Awards in the Media and Visual Communications-Entertainment category in 2015 and 2018. For more information, please visit www.cj4dplex.com.

ScreenX is the world’s first multi-projection system used within a theatre setting. It was created in 2012 by CJ CGV, part of South Korean conglomerate CJ Group, as one of the “next cinema formats” along with 4DX, the multisensory cinema technology with motion and environmental effects. ScreenX allows moviegoers to go beyond the frame of the movie screen by expanding the center image of feature films and pre-show advertising to create an immersive, panoramic, 270-degree format that projects onto three theatre walls. To date, ScreenX has been installed in 203 screens around the world, including 87 screens in South Korea; 66 screens in China; 17 in the United States; 9 in England; 4 in Turkey; 4 in Japan; 3 in Switzerland; 2 in France; 2 in Vietnam and 1 in Spain, Hungary, UAE, Kuwait, Thailand, Indonesia, Israel, Canada, and Poland. ScreenX was recognized as the “Innovator of the Year” at ShowEast 2018. For more information, please visit www.screenx.co.kr