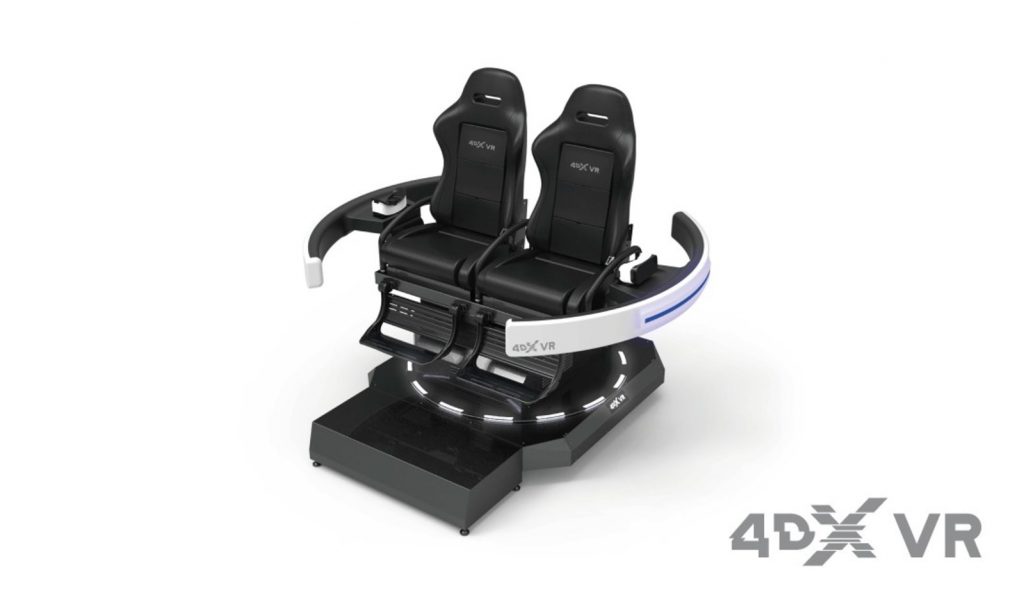 Innovative entertainment technology leader CJ 4DPLEX today announced that it will showcase for the first time to the public the new 4DX VR Disk unit at IAAPA Attractions Expo (IAE) 2017. CJ 4DPLEX will also be showcasing the best-selling 4DX VR Ride, 4DX VR Sway and Twist, and an upgraded version of its 4DX VR Racing unit. All visitors to CJ 4DPLEX’ booth (#2247) at IAE 2017 will experience a collection of adventure VR content including a roller coaster, a monster game, car racing, spacecraft rides, and rickshaw rides in each of the 4 types of 4DX VR offerings.

The 4DX VR Disk is a new product for CJ 4DPLEX, which has never before been exhibited. The Disk allows people to explore 360 degrees of virtual reality without having to place their feet on the floor. The Disk rotates horizontally and gives the feeling of actually being in a particular environment and able to move around freely. The 4DX VR Disk also gives users the feeling of acceleration and deceleration and can be used with any VR head-mounted device(HMD) as well as in coordination with any VR content including gaming and short films.

Additionally, CJ 4DPLEX’ best-selling product from its 4DX VR products line, 4DX VR Ride, is returning to the IAE showcase after the successful launch in AAE 2017 this June. A favorite with family entertainment center (FEC) owners and distributors, 4DX VR Ride is a four or eight seat all-in-one virtual ready 4D-ride package. The 4DX VR Ride’s perfectly synchronized motion effects along with the action and movements from VR content create a crowd-pleasing immersive experience amplified by being inside the physical vehicle.

4DX VR Racing is also returning to IAE, but with a revamped design. 4DX VR’s interactive racing product allows up to four players, each racing against the clock and head-to-head against each other in real time. CJ 4DPLEX’ multiplayer racing simulator delivers an accurate simulation for an incredibly realistic full motion VR experience. With its footprint coming in at under 1.8 square meters, FECs and other venues can generate high returns in a small space. Players are able to sit side-by-side and experience a VR racing attraction like never before. VR Racing is optimized for dynamic VR games, such as driving, extreme sports, and riding.

Another product returning to IAE 2017 will be 4DX VR Sway and Twist. This offering can be custom configured for any venue from small scale attractions to large scale venues of 500 or more seats. The motion-technology of the Sway and Twist chairs allows for a groundbreaking level of movement in an unprecedented number of directions creating a memorable immersive experience. The dynamic performance is equalized by the precise motion and spectacular efficiency.

“Our company has been committed to taking our 4DX VR lineup to the next level in order to be an impactful game-changer in the virtual reality entertainment industry,” said Byung-Hwan Choi, CEO of CJ 4DPLEX. “We are excited for the opportunity to showcase our state-of-the-art VR products to many clients and partners, both old and new, at the expo in Orlando.”

CJ 4DPLEX recently announced its strategic partnership with US VR Global Inc, one of the world’s leading virtual reality (VR) and augmented reality (AR) technology companies and will provide the innovative and immersive 4DX VR products to the US VR Global Inc.’s newly introduced HERO Central Park – the world’s largest virtual reality theme park. HERO Central Park is expected to open its door to the public by the fourth quarter of 2018.

About CJ 4DPLEX
CJ 4DPLEX is the world’s first 4D cinema company, headquartered in Seoul with international offices in Los Angeles and Beijing. The company created 4DX, the first and leading 4D cinema technology for feature films, providing moviegoers with an immersive cinematic experience that utilizes all five senses, allowing the audience to connect with movies through motion, vibration, water, wind, snow, lightning, scents, and other special effects that enhance the visuals on-screen. CJ 4DPLEX brings 4DX auditoriums to exhibition partners along with 4DX codes for both major Hollywood blockbusters and local titles. Each auditorium incorporates motion-based seating synchronized with more than 20 different effects and optimized by a team of skilled editors, maximizing the feeling of immersion within the movie, beyond the limits of audio and video. Since 2009, more than 450 Hollywood and local titles have been screened in 4DX. As of November 2017, more than 50,000 4DX seats operate in 420 auditoriums spanning 50 countries. CJ 4DPLEX was named a Most Innovative Company of 2017 in Live Events by Fast Company. For more information, please visit www.cj4dplex.com