CJ 4DPLEX Grows European 4DX Footprint By 65% In One Year 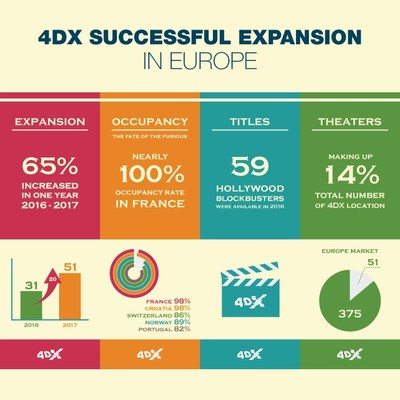 Opens 4DX Screens in 20 Theatres Across 13 European Countries In 12 Months from May 1, 2016 through April 30, 2017 - Occupancy Rates of 4DX Theatres in Europe For Opening Weekend of The Fate of the Furious More Than 20% Higher Than 4DX's Global Average

CJ 4DPLEX, the world’s leading 4D cinema company, has increased the European footprint of its 4DX technology by 65 percent in the past year.

After first coming to Europe in 2012 with the opening of four 4DX theatres, CJ 4DPLEX has spent the last 12 months rolling out its immersive cinema technology – featuring moving seats and environmental effects such as wind, rain, scents, and much more – across the continent. The expansion has reached 20 new European locations that have opened from May 1, 2016 through April 30, 2017, including the first 4DX theatres in Slovakia, Serbia, Norway and France.

A major reason for this expansion is the passionate following 4DX has in Europe, where 59 titles were showcased in the format in 2016 alone. The newest title to be released in 4DX is Guardians of the Galaxy Vol. 2, which is currently being presented on all 51 European screens.

4DX screenings of The Fate of the Furious recently generated 20 to 30 percent higher occupancy rates in Europe than the worldwide 4DX average occupancy rate (56 percent) during the film’s international opening week. Some of the film’s strongest success in this format took place in France, where 4DX screenings ofThe Fate of the Furious saw an average occupancy rate of nearly 100 percent, virtually selling out during the entire two weeks of the film’s 4DX run. Other notable opening weekend occupancy rates for the global blockbuster include Croatia (98 percent), Norway (89 percent), Switzerland (86 percent) and Portugal (82 percent).

“Europe is one of our important markets, with theatres on the continent currently making up 14 percent of the total number of 4DX locations around the world. We eagerly continue to rapidly expand our reach in the region, building solid partnerships with new multiplex operators and maintaining reliable relationships with existing partners as we grow our European footprint,” said Byung-Hwan Choi, CEO of CJ 4DPLEX.

In Europe, 4DX is currently available in Russia, Hungary, Poland, the Czech Republic, Bulgaria, Croatia, Ukraine, the United Kingdom, Switzerland,Romania, Turkey, Portugal, Slovakia, Serbia, Norway and France. The most recent 4DX theatre openings, in France and Norway, have seen an overall average occupancy rate of 80 percent for the duration of an entire month since they launched. A new 4DX location in Europe – the 52nd on the continent – is set to open in partnership with Hollywood Megaplex (HMP) in Austria in the next few months.

About CJ 4DPLEX
CJ 4DPLEX is the world’s first 4D cinema company, headquartered in Seoul with international offices in Los Angeles and Beijing. The company created 4DX, the first and leading 4D cinema technology for feature films, providing moviegoers with an immersive cinematic experience that utilizes all five senses, allowing the audience to connect with movies through motion, vibration, water, wind, snow, lightning, scents, and other special effects that enhance the visuals on-screen. CJ 4DPLEX brings 4DX auditoriums to exhibition partners along with 4DX codes for both major Hollywood blockbusters and local titles. Each auditorium incorporates motion-based seating synchronized with more than 20 different effects and optimized by a team of skilled editors, maximizing the feeling of immersion within the movie, beyond the limits of audio and video. Since 2009, more than 420 Hollywood titles have been screened in 4DX. As of May 2017, more than 46,000 4DX seats operate in 375 auditoriums spanning 48 countries. CJ 4DPLEX was named a Most Innovative Company of 2017 in Live Events by Fast Company. For more information, please visit www.cj4dplex.com.