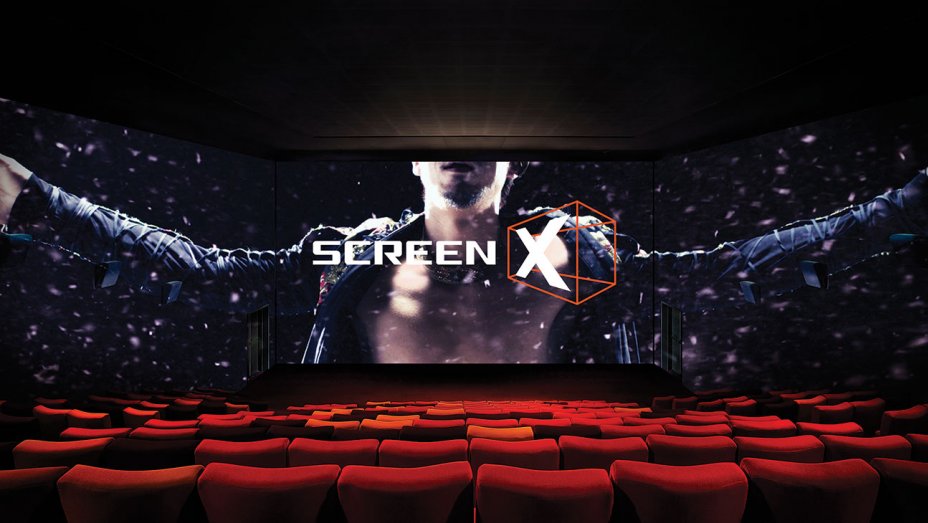 CJ 4DPLEX, the world’s leading producer of premium film formats and cinema technologies, and Cinemark, one of the world’s largest and most influential movie theatre companies, announced today they have signed an agreement to bring the expanded immersive ScreenX technology to select Cinemark locations in the U.S. Together, they will convert auditoriums in six Cinemark theatres in Texas and California by the end of the year, with plans for a potential expansion.

ScreenX is the world’s first multi-projection cinema with an immersive 270-degree field of view. ScreenX expands specially selected sequences of a film onto the left and right-side walls of the auditorium, surrounding audiences with extended imagery that naturally fills their peripheral vision and immerses them into the narrative of the film. ScreenX works closely with filmmakers and studios to ensure the highest quality presentation of the film in select key scenes with exclusive story-enhancing imagery produced by CJ 4DPLEX’s VFX studio in Korea.

The deal comes at an exciting time for the immersive format, as it is rapidly growing its footprint in the U.S. and abroad. Recent ScreenX films include Marvel Studios’ “Doctor Strange In the Multiverse of Madness” and “Thor: Love and Thunder,” Warner Bros.’ “Elvis,” Sony’s “Bullet Train” and Paramount’s summer blockbuster “Top Gun: Maverick.”

“Cinemark is a world-class exhibitor with high performing locations all across the U.S. and Latin America,” said Don Savant, CEO, CJ 4DPLEX Americas. “We are thrilled to partner with the Cinemark team to bring their moviegoers our Super Premium ScreenX experience, which is uniquely differentiated from what they can stream at home or on a mobile device. ”

“It’s an exciting time for the company as we continue to supply blockbuster tentpole films and work with filmmakers who are recognizing the format’s unique ability to tell their story using ScreenX as their canvas,” said Jong Ryul Kim, CEO of CJ 4DPLEX.

ScreenX theatres have grown dramatically since being introduced in 2012. In total, ScreenX is available worldwide in over 380 locations, across 38 countries.

About CJ 4DPLEX
CJ 4DPLEX is a leading, next-generation cinema technology company, headquartered in Seoul with international offices in Los Angeles and Beijing. The company has created innovative film technologies for theaters worldwide that include ‘ScreenX’, ‘4DX’, and ‘4DX Screen’ for consumers to experience films in ways that were never before possible.

CJ 4DPLEX is a part of the CJ Group conglomerate that also includes entertainment powerhouses CJ CGV, the fifth largest theater chain in the world, and CJ ENM (CJ Entertainment & Media), who produced the Academy Award, Golden Globe and SAG Awards winning film, “Parasite”. CJ 4DPLEX was named Most Innovative Company of 2017 and 2019 in Live Events by Fast Company, and the technology has been recognized with Silver at the Edison Awards in the Media and Visual Communications-Entertainment category in 2015 and 2018.

ScreenX is the world’s first multi-projection cinema with an immersive 270 degree field of view. By expanding the image beyond the frame and onto the walls of the theatre, ScreenX draws you into the story on the main screen and immerses you in a virtual reality like setting with cinema quality resolution. To date, there are over 381 ScreenX auditoriums around the world in 38 countries.

4DX provides moviegoers with a multi-sensory cinema-going experience, allowing audiences to connect with movies through motion, vibration, water, wind, snow, lightning, scents, and other special effects that enhance the visuals on-screen. Each 4DX auditorium incorporates motion-based seating synchronized with more than 21 different effects and optimized by a team of skilled editors. To date, there are over 784 4DX auditoriums around the world, spanning over 69 countries.

4DXScreen is a powerful combination of our super premium immersive theatre technologies of ScreenX and 4DX in one auditorium, creating a never-before-seen experience for cinemagoers. To date, there are 42 4DXScreens installed around the globe.

About Cinemark Holdings, Inc.
Headquartered in Plano, TX, Cinemark (NYSE: CNK) is one of the largest and most influential movie theatre companies in the world. Cinemark’s circuit, comprised of various brands that also include Century, Tinseltown and Rave, operates 521 theatres in 42 states domestically and 15 countries throughout South and Central America. Cinemark consistently provides an extraordinary guest experience from the initial ticket purchase to the closing credits, including Movie Club, the industry-leading exhibitor-launched subscription program and the first to reach the one-million-member milestone; the highest Luxury Lounger recliner seat penetration among the major players; XD – the No. 1 exhibitor-brand premium large format; and expansive food and beverage options to further enhance the moviegoing experience.