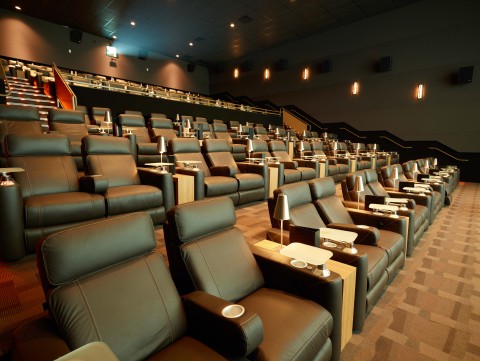 44,000-Square-Foot, 750-Seat Multiplex Serves as the Cinema Anchor for the 75-acre Urban Lifestyle District in Dallas

Cinépolis USA, a leading world-class cinema exhibitor known for its enhanced movie-going concepts, announced today the grand opening date of Friday, July 27 for Cinépolis Luxury Cinemas-Victory Park, the first luxury theater for the brand in the Lone Star State. The eight-screen, 750-seat multiplex will serve as the cinema anchor at Victory Park, a 75-acre urban lifestyle destination just north of downtown Dallas. Located at the northwest corner of Victory Park Lane and High Market Street, the theater marks Cinépolis USA’s debut in Dallas, where the company holds its headquarters.

“Dallas is our home, so it is particularly exciting to launch our luxury cinemas in Victory Park, a coveted destination that is quickly becoming the premier entertainment district in the city,” said Luis Olloqui, Chief Executive Officer, Cinépolis USA. “We look forward to bringing our personal touch to the Dallas community by introducing a new movie-going experience in our own backyard.”

A destination unto itself, the 44,000-square-foot Cinépolis Luxury Cinemas-Victory Park will offer guests a luxury movie-going experience with 750 fully-reclining leather seats in its eight auditoriums, each complete with cutting-edge sound and high-definition projection technology, an upscale lounge-style lobby space as well as a gourmet concessions menu and in-theater waiter service available at the push of a button. Cinépolis Luxury Cinemas-Victory Park will feature a new menu that is being introduced exclusively to Victory Park first and then will roll out nationally to all luxury cinemas this August. Guests may also enjoy beverages from the full bar menu, which includes craft beer, specialty cocktails and Cinépolis USA Private Label wine.

“The investments we’ve made to revitalize Victory Park have attracted some of the finest partners in the business, like Cinépolis USA, which will bring a luxury movie-going experience,” said Lance Fair, COO of Estein USA. “They share our vision for the project and we look forward to continuing to create a top walkable street retail and entertainment district.”

The second cinema house set to open in Texas as part of the brand’s aggressive growth plan, Cinépolis Luxury Cinemas-Victory Park adds to Cinépolis USA’s luxury movie theater category. Its opening follows the brand’s entry into Texas with premium theater concept Cinépolis Euless in August 2017. Currently, there are 18 theaters in the U.S., located in Texas, Southern California, Florida, New Jersey, Connecticut, Ohio and New York, with three openings this year and 10 new theater openings and acquisitions projected through 2020, representing a 55 percent increase in Cinépolis USA’s portfolio of luxury and premium cinemas. In 2017, Cinépolis reported 338.4 million attendees to its theaters worldwide.

Cinépolis Luxury Cinemas-Victory Park, located at 2365 Victory Park Lane, Dallas, Texas, will screen movies seven days a week with ticket prices ranging from $10-18 for adults, and $8-14 for children. Taxes and special format charges may apply. Guests will be able to reserve seating via www.cinepolisusa.com upon the theater’s opening. For employment inquiries, contact jobs@cinepolis.com.

About Cinépolis USA
Cinépolis USA is a leading world-class cinema exhibitor that offers guests enhanced movie-going experiences through its “Cinépolis Luxury Cinemas” and “Cinépolis” theater concepts, and newly debuted 4DX and kid-approved Cinépolis Junior auditoriums. The Dallas-based theater chain opened its first theater in Del Mar, CA in July 2011 and has some of the top performing theaters in the country, currently operating a total of 18 luxury and premium theaters with a presence in Southern California, Florida, New York, New Jersey, Connecticut, Texas and Ohio. Additional theaters across the U.S. are planned to open in the next few years. Its México-based parent company, Cinépolis, is the fourth largest movie theater exhibitor in the world. For more information about Cinépolis USA, please visit www.cinepolisusa.com, or follow on Facebook at www.facebook.com/CinepolisUSA, Instagram at @CinepolisUSA or Twitter at www.twitter.com/CinepolisUSA.

About Cinépolis
Cinépolis was founded in Mexico in the city of Morelia, Michoacán in 1971. Today it has positioned itself as the world’s 4th largest movie theater circuit, operating 665 cinema complexes, 5,313 screens and over 1,133,820 seats across 14 countries worldwide. It was the first cinema exhibitor in the world to pioneer the concept of luxury movie theaters, establishing the first luxury theater experience in 1999 in Mexico City. Cinépolis aspires to provide its guests with the best overall experience in film entertainment and employs a global workforce of more than 39,600 people to support its mission. Cinépolis plans to continue to revolutionize the industry for years to come.