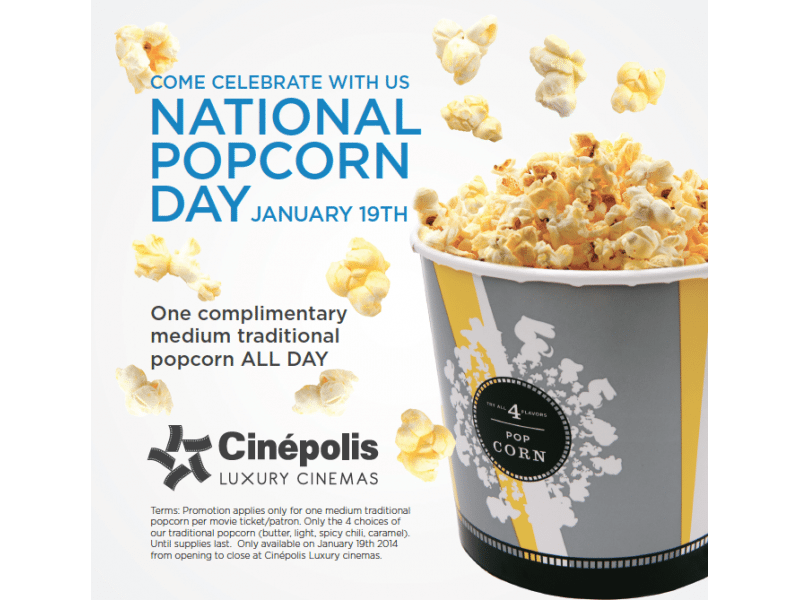 Creative and peppy to the core, Cinepolis has been celebrating National Popcorn Day since 2016. This year, Cinépolis unveiled #cinepolispopcornday by going beyond classic concessions and standard deals in a bid to pique the interest of the movie goers. It is not just a celebration of the most loved snack but a quest to make the National Popcorn Day a memorable one.

The multiplex chain introduced the Popcorn Family this year with 3 members – Daddy Popcorn, Mommy Popcorn and Little Popcorn. The characters interacted with the audience, danced their way through a parade to celebrate the occasion. The activity was well received by the Cinépolis audience.

About Cinépolis India Cinepolis India is a wholly owned subsidiary of Cinepolis and is the 1st international exhibitor in India. The company currently operates 329 screens under the brand names of Cinépolis, Cinépolis VIP and Fun Cinemas. Cinépolis operates India’s biggest Megaplex – 15 Screen Multiplex in Pune and brought innovative concepts to exhibition Industry in India. Cinépolis India has been awarded with “Most Admired Retail Launch” in 2010, “Most Admired Retailer – Innovation” in 2011, “Fastest Growing Multiplex Chain” in 2015, “IMAGES Most Admired Retailer – Entertainment” in 2015, “DLP CineAsia Marketing Achievement Award” in 2015, ‘Best Marketing Campaign of the Year’ award at the Making of Developed India awards 2017 and recently ‘Fastest Growing National Chain’, ‘Best Multiplex – West’ and ‘Best Programming’ at the Indywood Film Carnival in 2017.

Tickets can be booked from the company website: www.cinepolisindia.com

About Cinepolis
Cinepolis, founded in 1971 and headquartered in Morelia, Mexico, is the world’s 2nd largest movie theatre circuit, operating over 5300 screens across 14 countries and serving more than 330 million patrons annually. Cinepolis was the first cinema exhibitor in the world to pioneer the concept of premium and luxury movie theatres via its Cinépolis VIP brand and is the largest operator of luxury cinemas in the world. (NewsVoir) DL