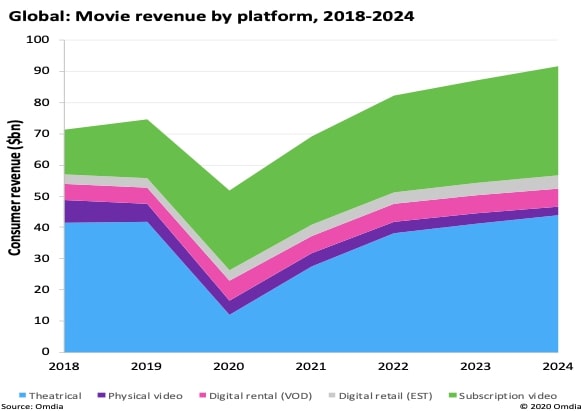 The global cinema industry is set to lose $32bn in 2020 due to the Covid-19 pandemic a 71.5% reduction in box office revenue compared to 2019, according to Omdia’s latest ‘Movie Windows: Adapting for the future’ report.

Box office revenue has dipped below $13bn for the first time in over two decades, forcing many studios to experiment with other platforms to account for the decline in box office revenues.

Disney+ has trialed the use of Premium Video on Demand to launch titles such as Mulan, whilst Wonder Woman 1984 will significantly shorten its theatrical window to only one week internationally before appearing on streaming services. However, whilst this approach may satisfy consumer demand, PVOD has only accounted for a mere $630million in revenues for studios in 2020.

Theatrical window timeframes evolving is not a new phenomenon, over the past two decades average US EST and physical windows have shortened by over a month, US consumer spending on cinema has grown by 50% over the same time period.

However, Covid-19 has presented an opportunity for studios to experiment with alternative distribution models and identify new revenue streams such as PVOD, which may be used on selected titles and formats moving forward rather than totally replacing theatrical windows.

Covid-19 has accelerated the experimentation of the length of theatrical windows and other platform launches, many studios will still be looking towards 2021 and beyond to resume their big blockbuster cinema launches. In 2019, the US Top 10 films generate 70% of their box office takings within the first two weeks of release. This compares to 63.1% for the films ranked between 41 and 50 and 40.9% for the films between 91 and 100.

Whilst traditional theatrical windows will typically include a 90-day theatrical release window, 14-day EST period, followed by a 90-day VOD (digital rental) and physical retail, before moving to subscription services and Pay TV to maximize revenues – PVOD is a drastic move in the other direction.

On the other hand, PVOD is totally reliant on the content curator decision on when and where they want to publish individual titles. For example, Disney launched Mulan directly, onto their own platform Disney+.

Maria Rua Aguete, Senior Director, Media and Entertainment at OMDIA commented: “COVID-19 also created a bottleneck of new releases which puts into question the traditional windowing model as downstream revenue sources suffer from the lack of new releases onto other platforms in 2020 and 2021. It has also created a unique opportunity for studios to experiment with other distribution models such as PVOD or and to a lesser degree straight-to-streaming without equivalent relationship damages as before.

“Most 2020 experimentation has not been about moving new release movies to latter windows (namely, online subscription video) sooner however, rather about creating new and temporary revenue streams to capitalize on produced content via PVOD or otherwise.”

We combine the expertise of more than 400 analysts across the entire technology spectrum covering 150 markets and publish over 3,000 research reports annually, reaching over 14,000 subscribers, and covering thousands of technology, media, and telecommunications companies.

Our exhaustive intelligence and deep technology expertise allow us to uncover actionable insights that help our customers connect the dots in today’s constantly evolving technology environment and empower them to improve their businesses – today and tomorrow.