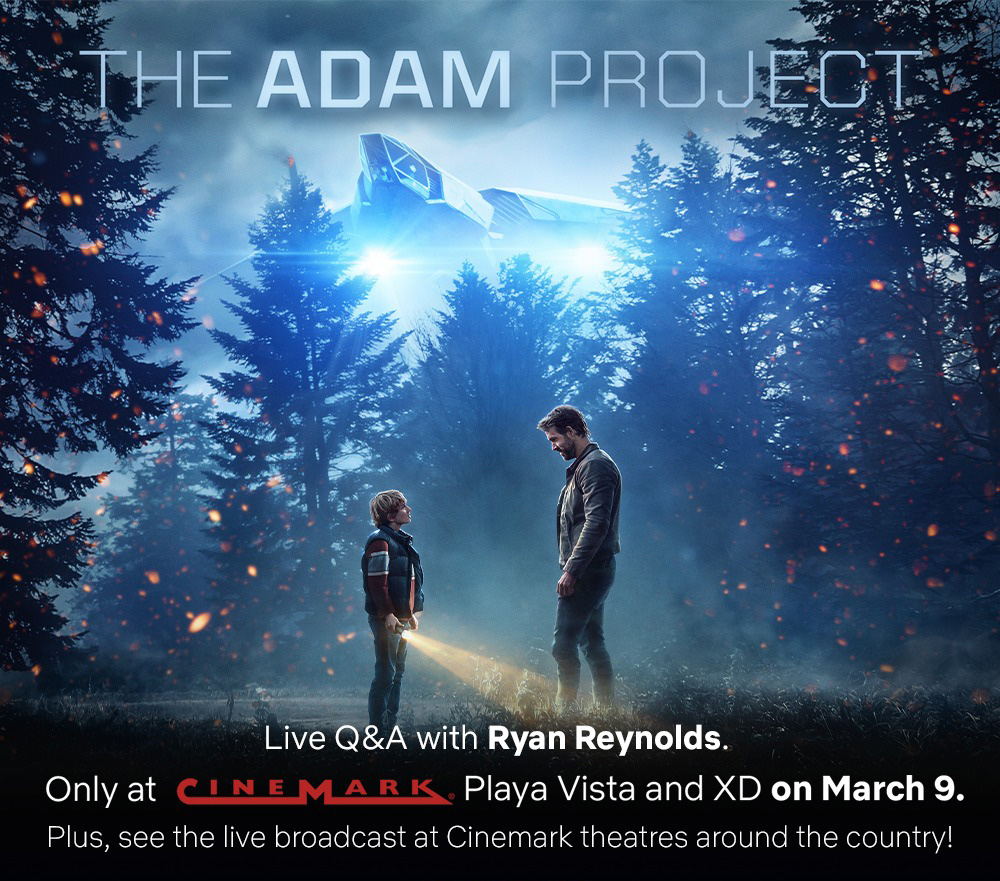 Cinemark Holdings, Inc., one of the world’s largest and most influential movie theatre companies, continues to build on its technological evolution and studio relationships to bring audiences engaging out-of-home experiences that complement thrilling Hollywood content, further solidifying its position as the ultimate entertainment destination. Through strong business alliances and creative thinking, Cinemark is utilizing its industry-leading technology to provide consumers with a wide array of compelling content ranging from highly demanded concerts to beyond-the-screen talent Q&As. Fans can visit Cinemark.com or the Cinemark mobile app to discover the latest excitement coming to the big screen.

“As the ultimate entertainment destination, Cinemark thrives in delighting audiences with a wide variety of enthralling content, including experiences audiences might not expect from a movie theatre,” said Wanda Gierhart Fearing, Cinemark Chief Marketing and Content Officer. “Consistent investment in evolving our in-theatre technology and the overall experience we provide has Cinemark supremely positioned to transport viewers even further into the on-screen action.”

Star-Studded Special Events
As a special treat to movie lovers, Cinemark brings in-theatre movie releases to the next level for select notable films in collaboration with major studios. Fans are transported right to the red carpet through special advance screening events that offer moviegoers not only an early look at the latest movies, but also exclusive talent Q&As hosted at the company’s Cinemark Playa Vista and XD theatre and simulcast across its circuit. Through its heightened technology and strong studio partnerships, Cinemark has presented these beyond-the-screen moments to audiences for more than a dozen high profile films including “A Quiet Place Part II,” “Dear Evan Hansen,” “Scream and The Adam Project.”

Cue the Music
Cinemark has reimagined the concert experience for music lovers, bringing top tours from the stage to the comfort of an auditorium in partnership with Trafalgar Releasing. Most recently, Cinemark brought the must-see, live-captured BTS: Permission to Dance on Stage – Seoul concert to the vast majority of its domestic circuit and numerous locations in Central and South America. The company’s industry-leading theatre technology infrastructure enabled it to offer the concert at more U.S. theatres than any other exhibitor and expanded the global reach of the event by showcasing in numerous of its Central and South American theatres.

The spectacular success of the BTS concert builds on the ongoing slate of concerts such as Stevie Nicks, Florida Georgia Line, Bon Jovi, Joni Mitchell, Gorillaz, RUSH and others from Trafalgar Releasing. Larger-than-life screens and booming surround sound create a stunning environment for fans to sing and dance together in celebration of their favorite artists.

Game Big
Cinemark’s big screens, rich sound and ultra-comfy seats create an unmatched, immersive environment for major traditional and virtual gaming moments. This past winter, Cinemark teamed up with ESPN to bring the College Football Playoff Semifinal games and the College Football Playoff National Championship game to select theatres. Fans showed up in droves to experience college football’s most exciting and prestigious games in one of the most immersive and captivating out-of-home environments possible. Cinemark’s sight and sound technology paired with ESPN’s coverage of the games brought together the best of exhibition and college football to make audiences feel like they were part of the on-field action.

Cinemark’s bigger-than-life cinematic experience immerses spectators into major video and tabletop adventures. Following the spectacularly sold-out in-theatre debut of Critical Role’s Campaign 3 premiere, Cinemark once again brought Critters to its theatres as it simulcast the show’s seven-year anniversary episode to Cinemark locations across the U.S. and in Brazil. The exhibitor also touts a multi-year relationship with The Game Awards, showcasing the year’s biggest event in gaming live on its big screens. The circuit’s technological infrastructure lets gaming enthusiasts do more than just catch the action – they can create the action through in-theatre Premium Gaming Events or compete online with fellow Cinemark gamers through its esports leagues and tournaments in partnership with Mission Control.

Fight Night
In collaboration with Fathom Events, Joe Hand Promotions and Iconic, Cinemark is punching up AEW, WWE and Triller spectacles for fighting’s biggest fans. With the action on larger-than-life screens and the camaraderie of other enthusiasts in the auditorium, Cinemark has created knock-out nights for All Elite Wrestling Revolution, WWE SummerSlam, Triller Fight Club featuring Jake Paul vs. Ben Askren, Tyson Fury vs. Deontay Wilder III and more. The exhibitor will continue to work with its distribution partners to bring notable cards to theatres, ensuring no one misses a single taunt, jab or TKO.

About Cinemark Holdings, Inc.
Headquartered in Plano, TX, Cinemark (NYSE: CNK) is one of the largest and most influential movie theatre companies in the world. Cinemark’s circuit, comprised of various brands that also include Century, Tinseltown and Rave, operates 522 theatres (321 U.S., 201 South and Central America) with 5,868 screens (4,408 U.S., 1,460 South and Central America) in 42 states domestically and 15 countries throughout South and Central America. Cinemark consistently provides an extraordinary guest experience from the initial ticket purchase to the closing credits, including Movie Club, the first U.S. exhibitor-launched subscription program; the highest Luxury Lounger recliner seat penetration among the major players; XD – the No. 1 exhibitor-brand premium large format; and expansive food and beverage options to further enhance the moviegoing experience. For more information go to https://investors.cinemark.com/