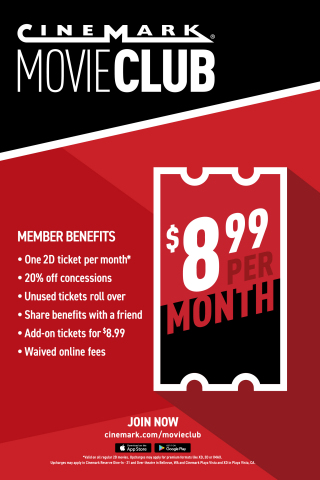 The Movie Club offering is one 2D movie ticket at any show time for $8.99 per month. In addition, key differentiators of the program include:

“We’re thrilled with the continued success of our Movie Club program, particularly the milestone of more than 1,000 members per theatre location,” stated Mark Zoradi, Cinemark’s Chief Executive Officer. “Our program targets a wide array of moderate to frequent movie-goers, which is a much larger population pool than the ultra-high frequency patrons. Our value offering is receiving phenomenal guest reviews to date with the roll-over feature, 20 percent concession discount, and waived online fees specified as the favored amenities.”

Movie Club is accepted at all Cinemark locations across the nation, including Century Theatres, CinéArts, Tinseltown and Rave Cinemas. To join, visit www.cinemark.com/movieclub or download the Cinemark app.

Cinemark is a leading domestic and international motion picture exhibitor, operating 539 theatres with 5,998 screens in 41 U.S. states, Brazil, Argentina and 13 other Latin American countries as of June 30, 2018. For more information go to investors.cinemark.com.