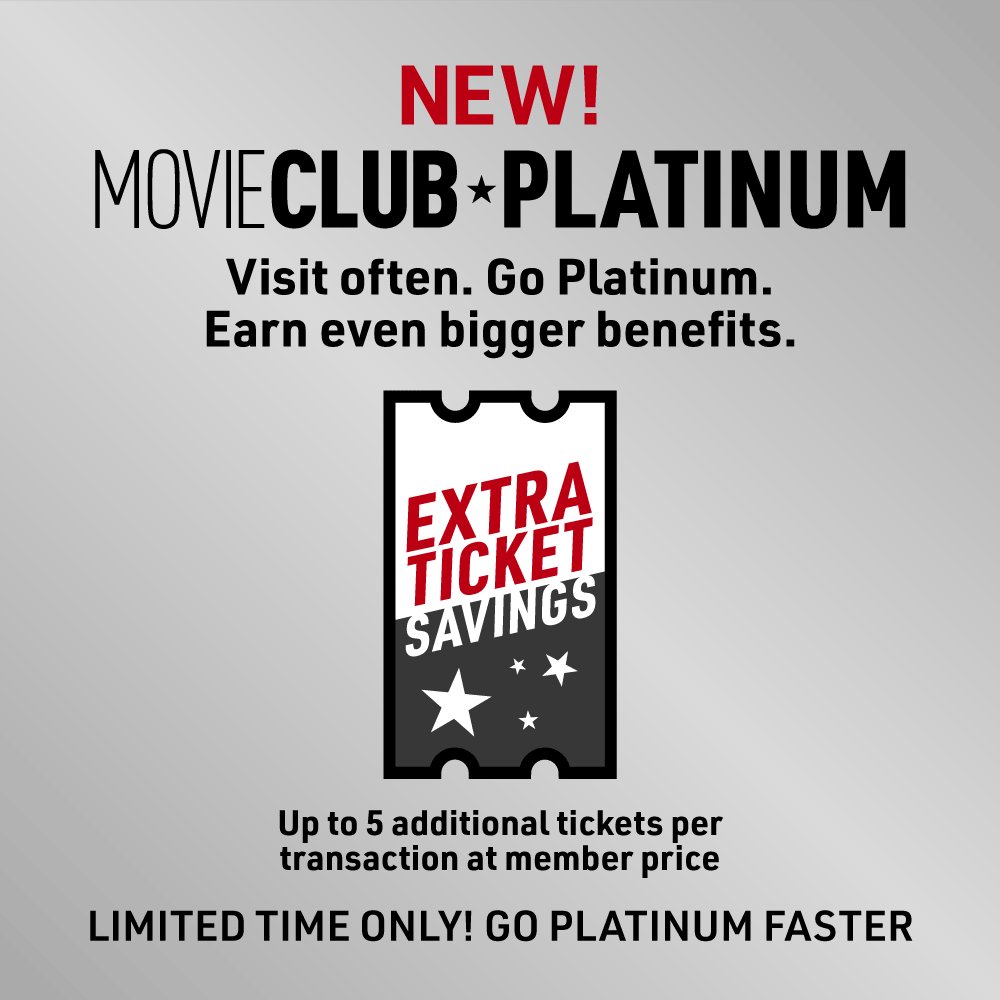 Cinemark Holdings, Inc., one of the world’s largest and most influential movie theatre companies, is increasing big screen benefits for its most loyal moviegoers with the introduction of Movie Club Platinum. Developed in direct response to Cinemark Movie Rewards members’ biggest wishes, Movie Club Platinum is a brand-new premium tier of Cinemark’s industry-leading monthly in-theatre membership program that rewards frequent visitors with star-studded savings. Movie lovers can learn more about Movie Club at Cinemark.com or on the Cinemark mobile app.

“We developed Movie Club Platinum the same exact way we developed our industry-leading Movie Club program – by listening to our moviegoers and giving them what they really want,” said Wanda Gierhart Fearing, Cinemark chief marketing and content officer. “This premium tier of our monthly membership program rewards our highest frequency moviegoers with bigger savings and bonus tickets, making a trip to the theatre even more valuable for those who love it most. Cinemark is always striving to roll out the red carpet for our guests, and offering this amazing reward is our way of giving our most loyal members the celebrity treatment. With the outstanding film lineup coming to the big screen, there is no better time to get more out of moviegoing.”

Platinum Perks for the Most Passionate Moviegoers
Movie Club Platinum exemplifies Cinemark’s dedication to continually evolving the guest experience and finding new ways to reward its moviegoers. All Cinemark Movie Club members who visit a Cinemark theatre 25 times or purchase 60 tickets within a calendar year will automatically earn the coveted Platinum perks. In addition to their existing Movie Club benefits, Platinum members will also earn two bonus movie ticket credits, receive an increased concessions discount upped to 25 percent, and the ability to purchase up to five tickets at the member price per transaction, all at no extra cost. These added benefits are a tribute to the most avid movie lovers, offering them elite privileges that elevate the cinematic experience.

Film fans can reach this superstar level even faster in 2021 by visiting a Cinemark theatre eight times or purchasing 24 tickets before Dec. 31. A member’s status is upgraded when they hit the threshold, and they remain platinum through the subsequent calendar year.

Inspired by Cinemark Movie Lovers
Cinemark Movie Club was the first U.S. exhibitor-based in-theatre membership program and has been a fan favorite for nearly four years. With resoundingly positive feedback, Cinemark did extensive customer research about how to make the program even more exciting for loyal moviegoers. In surveys, active Movie Club members were overwhelmingly enthusiastic about an elevated reward-based tier with added benefits for frequent moviegoing. The development of Movie Club Platinum further emphasizes Cinemark’s dedication to its moviegoers and the company’s pursuit of creating a frictionless moviegoing experience that takes the work out of having fun.

Launched in December 2017, Cinemark Movie Club was the first transaction-based movie subscription service. Movie Club is a component of Cinemark Movie Rewards, Cinemark’s tiered loyalty program that awards movie lovers with one point for every dollar spent at a Cinemark theatre. As a paid loyalty tier, Movie Club provides a significant value proposition to moviegoers. For USD $9.99 per month plus tax, Movie Club members earn one ticket per month, 20 percent concessions discount, one companion ticket at the member price per transaction, waived online fees and the ability to roll over unused tickets. Movie Club makes it easy to experience the joy of moviegoing with family and friends Cinemark is committed to evolving Movie Club to continue to surprise and delight moviegoers with big screen rewards.

With the exciting new films coming soon to the silver screen, Movie Club members will elevate to Platinum status in a flash. “No Time to Die,” “Dune,” “Ghostbusters: Afterlife,” “Eternals,” “West Side Story” and more come to theatres through the remainder of the year, and 2022 will be action packed with films like “Top Gun: Maverick,” the long-awaited “Avatar” sequel, “Black Panther: Wakanda Forever,” “Mission: Impossible 7” and “Jurassic World: Dominion,” just to name a few.