Cinemark and ESPN Once Again Team Up to Bring College Football’s Biggest Games to the Big Screen, This Time Expanding Theater Count 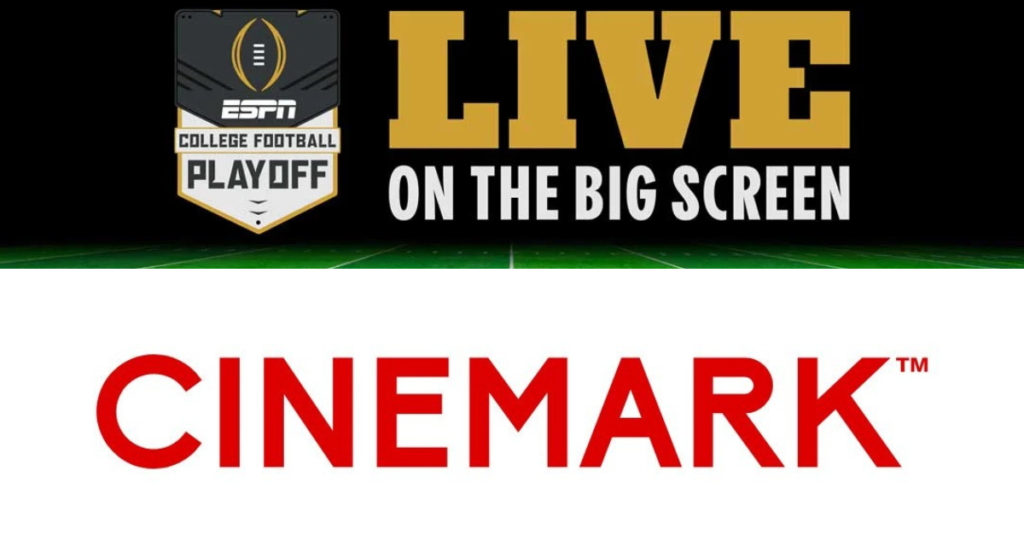 “Cinemark is thrilled to once again offer college football fans an opportunity to watch this year’s most anticipated games in our immersive, shared environment, especially given the enthusiasm we saw in our theaters last year,” said Wanda Gierhart Fearing, Cinemark Chief Marketing and Content Officer. “We are thankful for the collaboration with ESPN and our ability to bring this year’s games to even more cities as we expand participating locations. Our larger-than-life screens and booming surround sound create the ultimate experience for fans to cheer on their team without missing a single heart-pounding play.”

Enthusiasts who want to see the games in theaters can reserve their seat when they purchase a $10 concessions package. Sales kick off TODAY. For information on participating theaters and to purchase concessions packages, visit Cinemark.com/CFP or the Cinemark mobile app.

Do not leave the opportunity to see this in the cinematic environment to a coin toss – last year’s attendees cheered about the entire experience.

“The energy of watching the game with other people and watching on the big screen is way more fun than just watching it at home… and popcorn!”

“Nothing like seeing two very good teams in the place that I have liked going to since I was a kid.”

“It is perfect. I mean, it is really unbelievable… the crowd getting into it, people cheering, great food, perfect environment for a football game.”

About Cinemark Holdings, Inc.
Headquartered in Plano, TX, Cinemark (NYSE: CNK) is one of the largest and most influential movie theater companies in the world. Cinemark’s circuit, comprised of various brands that also include Century, Tinseltown and Rave, operates 517 theaters with 5,835 screens in 42 states domestically and 15 countries throughout South and Central America. Cinemark consistently provides an extraordinary guest experience from the initial ticket purchase to the closing credits, including Movie Club, the first U.S. exhibitor-launched subscription program and the first to reach the one-million-member milestone; the highest Luxury Lounger recliner seat penetration among the major players; XD – the No. 1 exhibitor-brand premium large format; and expansive food and beverage options to further enhance the moviegoing experience. For more information go to https://ir.cinemark.com.