CinemaLive Announce Live Cinema Broadcast of Take That’s Wonderland Show From The O2 on Friday 9 June – One Night Only! 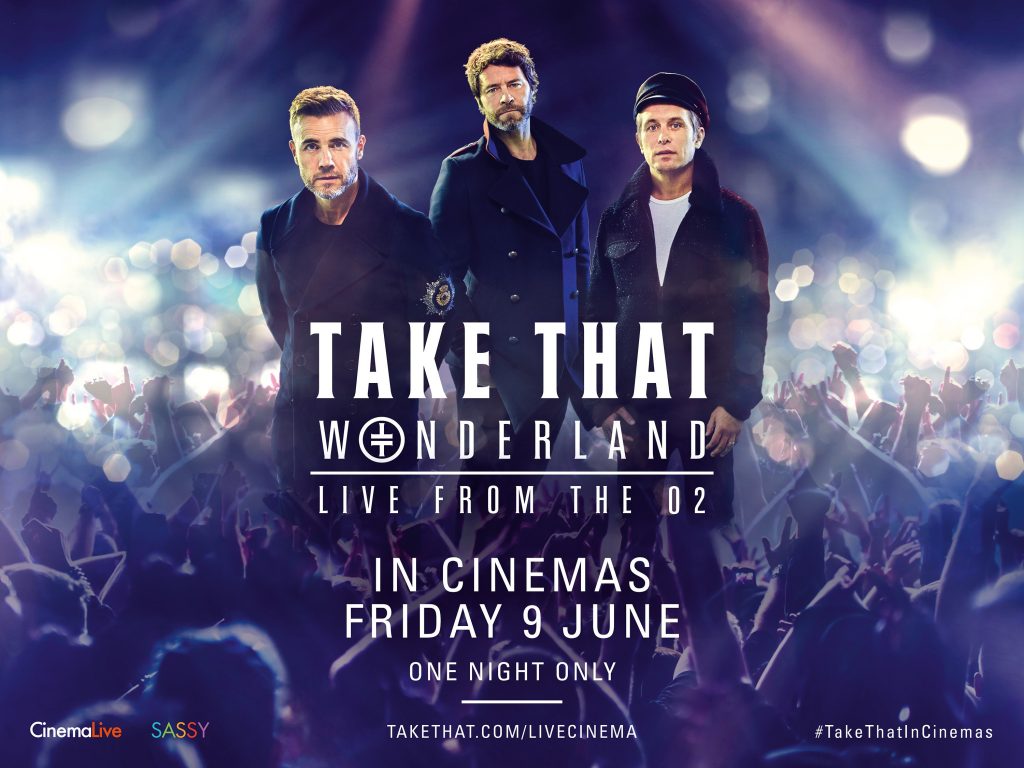 Event Cinema specialists CinemaLive are proud to announce that they are partnering with Sassy Films and Take That, the UK’s most successful live act for the first time to broadcast their ‘Wonderland’ concert from the O2 Arena on Friday 9 June to close to 500 cinemas across the UK, Ireland and selected territories worldwide.

The live broadcast will be produced by Sassy Films, the UK’s leading live content agency behind the hugely successful ‘Take That Live From The 02’. The show will be executive produced by Mark Wagman, Steve Kemsley and Janelle Mason (CinemaLive) and live produced by Richard Adamson.

CinemaLive currently hold the record the Highest Grossing Music Concert at the UK & Irish box office, as well as the same record for Australia, New Zealand, The Netherlands and Denmark.

Mark Wagman, Director of Talent at Sassy Films said: “We are thrilled to be working again with Take That and their brilliant team and for the first time, CinemaLive. Take That always produce an incredible show and we can’t wait to make it an unforgettable live cinema event. We hope this will be the first of many cinema events in association with CinemaLive.”

CinemaLive Director and CEO Peter Skillman said: “Music concerts in cinema can yield great commercial success as Take That proved in 2015, and we’re privileged to be distributing their brand new, cinematic Wonderland concert live from the O2. We’re also delighted to be partnering with Sassy Films for the first time – their incredible track record of filming some of the biggest musical artists will ensure the live cinema broadcast will be second to none.”

For the first time ever, Take That will perform in the round at the O2 arena, giving fans a unique and unbeatable cinematic experience. Tickets can be purchased via www.takethat.com/livecinema from Friday 21 April.

CinemaLive, is a multi-award winning specialist in Event Cinema which distributes and delivers live and recorded content theatrically to over 70 countries worldwide covering a range of genres including music concerts, opera, theatre, musicals and comedy. CinemaLive currently hold the record the Highest Grossing Music Concert at the UK & Irish box office. www.cinemalive.com

For further information go to www.sassyfilms.com