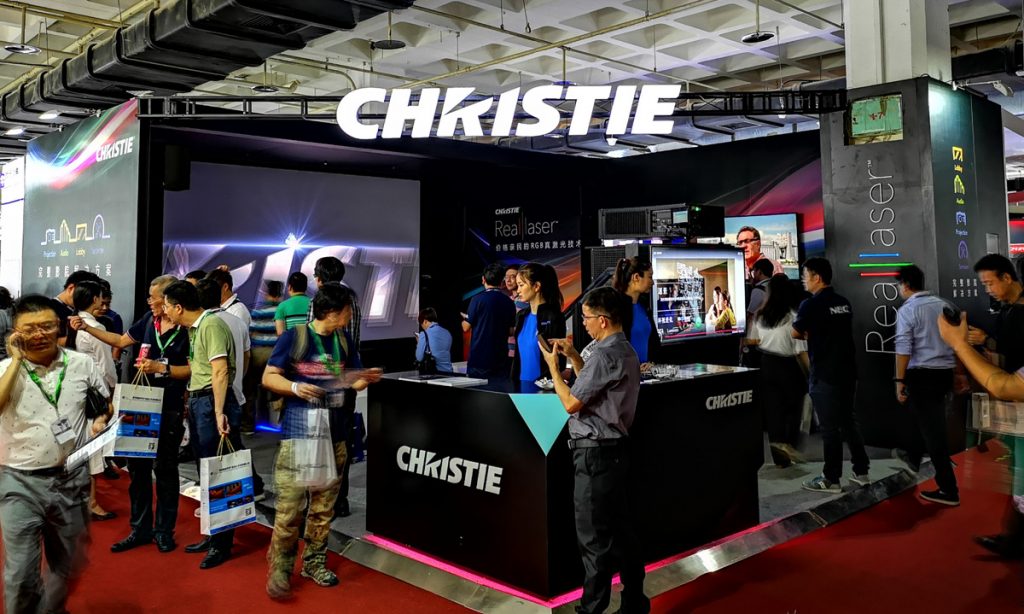 The Christie booth at #2A233 is conducting regular live demonstrations of the CP2315-RGB, the 2K version of Christie’s family of RealLaser cinema projectors that features an all-in-one design, which eliminates the current need for sub-ambient cooling. Attendees can witness bright and vibrant visuals of the CP2315-RGB in a custom-built internal theater at the booth, accompanied by the innovative Christie Vive Audio solution that offers rich, dynamic and detailed sound to complete the cinematic experience.

“Christie is strongly committed to developing technologies that add real value for our customers. With Christie RealLaser, we have finally made available the world’s first laser illumination technology that qualifies as a true replacement of lamp-based illumination,” said Dale Miller, Executive Vice President, Cinema, Christie. “We’re proud to showcase our RealLaser family of cinema projectors at BIRTV, one of the largest events within the film and broadcasting industry in Asia. It is the perfect platform to highlight our sustained dedication and commitment to improving the audience experience and shaping the future of exhibition.”

Lin Yu, Vice President, Asia Sales, Cinema, Christie, added, “There has been very strong interest in our RealLaser cinema projectors among exhibitors across China since the debut of the CP4325-RGB late last year. Our efforts to educate the industry on the merits of RGB pure laser are beginning to see results, with an increasing number of exhibitors convinced that RGB pure laser is the true replacement for lamp-based illumination and this technology is the future of cinema projection.”

The CP4325-RGB has garnered intense interest from China’s film industry since its official launch in late 2017. To drive home the advantages of RGB pure laser over hybrid laser technologies and to showcase the benefits of RealLaser technology, Christie collaborated recently with its Chinese distributors ACE and Donview in staging a series of roadshows across China to promote the CP4325-RGB.

To date, a total of 14 roadshows had been held in cities including Shanghai, Kunming, Guangzhou, Hangzhou, Changsha, Xi’an, Nanjing, Chengdu, Changchun and Jinan. The events received very positive feedback from the audiences, with many of them praising the bright, bold and vibrant colors displayed by the CP4325-RGB and agreeing that it is vastly superior to hybrid laser projection systems.

In conjunction with its participation in BIRTV, Christie will be demonstrating the benefits of RealLaser technology to members of the cinema industry in Beijing with a customer event to be held at Beijing CBD Wanda Cinemas on August 22. The program includes keynote speeches and presentations by management representatives from Christie and Wanda Film Holding, as well as an update on China’s film industry and box office trends by EntGroup, an independent third-party research company specializing in the entertainment industry.

Besides projection systems, Christie is also putting on show a comprehensive range of image processing and media servers at BIRTV, including hardware- and software-based options that empower users to create amazing visual experiences. This includes the award-winning Christie Pandoras Box media servers which are deployed at the booth to demonstrate how this cost-effective turnkey solution can perfectly unite state-of-the-art rendering technology with intuitive media and show control. The Christie Pandoras Box allows for projection onto any shape and any surface, making it the ideal choice for various applications, including utilization in cinema lobbies and immersive cinema corridors.

The Christie CP4325-RGB pure laser projector installed at the Qingdao Oriental Movie Metropolis Wanda Cinemas continues to deliver top notch visuals since its deployment in May 2018. Operations personnel reported that the CP4325-RGB has maintained optimal brightness and color even after extended periods of use – a clear testimony of the stability and reliability of RealLaser illumination technology, created by Christie. This corroborates with earlier findings that RealLaser ensures superior and consistent brightness levels according to DCI standards throughout the entire lifetime of the projector.

Separately, Wanda Film Holding, a subsidiary of Wanda Group and the Asia’s largest cinema operator, and Christie jointly established a research and development (R&D) center for cinema technology within the Wanda Studios’ site in Qingdao in April 2018. Known as the Wanda-Christie Cinema Technology Center of Excellence (CTCE), it is solely owned by Wanda Film Holding, with Christie as the exclusive partner to operate the high-tech facility for advanced R&D of digital cinema projection systems, which includes customized RGB laser projection technology for Wanda Film Holding and its global affiliates.