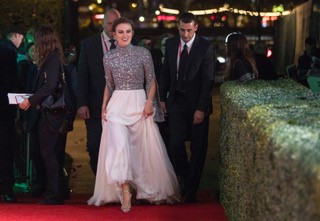 Filmgoers experienced Christie RealLaser for the first time in the UK at The BFI Patron’s Gala showing of Colette on Thursday October 11 at the BFI London Film Festival in partnership with American Express. The festival is taking place October 10-21. Colette – an independent British film starring Keira Knightley as the infamous French writer – was the first of several films at the popular Embankment Gardens site screened with a Christie CP4325-RGB pure laser cinema projector.

“We were determined to make the premium laser experience affordable to mainstream cinema exhibition,” said Phil Lord, Christie Cinema sales manager, EMEA. “Only Christie has this proprietary technology, which uses next-generation lasers to offer superior brightness and much higher contrast than conventional projectors. As such, Christie RealLaser can show colors never seen before by the human eye.”

This is the third year that the BFI London Film Festival has built a unique, full-scale, 820-seat cinema in the tranquil surroundings of Victoria Embankment Gardens, complete with tiered cinema seating, black box lining with serge, plus a full box-office area. A stone’s throw from the Thames and Leicester Square, the temporary cinema will host strand galas and several films at the site will be shown on Christie RealLaser™ including Sorry to Bother You, Suspiria, Border, Beautiful Boy and Wild Rose, which will show at the Festival Gala.

Dominic Simmons, Head of Technical Services at the BFI, was keen for the 2018 festival to embrace the technology trends currently transforming the cinema viewing experience.

“We’ve had over 60,000 filmgoers pass through the Embankment Garden Cinema since 2016 and our audience feedback has been amazingly positive. This year we’ve decided to raise the bar, and thanks to Christie, let our audiences experience the incredibly rich colors and high contrast ratios of laser projection. Our 16 meter-wide, matt white screen, is the perfect film projection surface, and I’m absolutely delighted that, as the premier film festival on these islands, we are the first venue in the UK to showcase Christie RealLaser.”

Lord is pleased once again to be involved in the project: “As a longstanding projection partner to BFI and supplier to the Embankment Garden Cinema since its inception, Christie was keen to see RealLaser deployed in such a landmark location. It’s no small task to assist the setup a fully-functioning, 800-plus seat cinema venue for such a prestigious organization as the BFI. But the results are always worth the effort, and I’m pleased that UK audiences can now experience our flagship cinema projection technology.”

The Festival partners with a host of London cinemas, with its films playing on 18 screens at 13 venues across the capital including the BFI Southbank, BFI IMAX, as well as Cineworld Leicester Square, the ICA, and Vue Leicester Square. Several key events will also be cinecast to cinema venues around the UK, including the world premiere of Peter Jackson’s They Shall Not Grow Old, which will be simultaneously screened, in 2D and 3D to cinemas and special venues across the UK (see Special Presentations) and for the first time ever, an LFF premiere outside London – with the LFF Special Presentation of Mike Leigh’s Peterloo taking place at HOME, Manchester.

Featuring RealLaser illumination and CineLife™ electronics, the Christie CP4325-RGB pure laser delivers a premium movie-going experience to mainstream theatres. This compact, all-in-one DCI-compliant projector excels in image quality and operational lifetime, while providing a low cost of ownership. Led by the CP4325-RGB, the RealLaser series offer all the advantages of a high-performance laser projector in a compact form factor that eliminates the need for sub-ambient external cooling – a big advantage for a non-permanent installation such as the Embankment Garden Cinema.