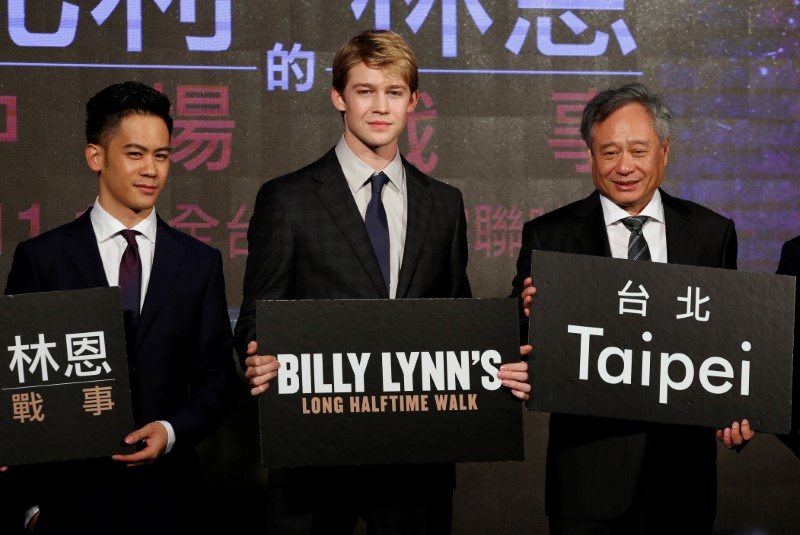 The star-studded event, which took place at Vieshow Cinemas Qsquare in Central Taipei, was attended by regional celebrities and prominent figures in Taiwan’s entertainment and media industry. The highlight of the premiere was none other than the appearances of director Lee and cast members Joe Alwyn (playing the title character) and Mason Lee, who mingled with excited crowds on the red carpet prior to the screening.

“Vieshow Cinemas is proud to be the only exhibitor in Taiwan to screen “Billy Lynn’s Long Halftime Walk” in 4K resolution, stereo 3D, and at 120 frames a second (fps) using the Christie Mirage 4KLH RGB laser projection system – a bold specification that exceeds all DCI-compliant presentation systems,” said Vincent Tsang, National Technical Manager, Vieshow Cinemas. “We have been working closely with Christie and Sony Tristar Pictures in preparation of this major movie event, and have pulled out all the stops to ensure that Taiwanese audiences can enjoy this technically groundbreaking movie in the best possible way that’s faithful to the director’s vision. I was confident that this presentation, with its hyper-clarity and realism, would set a new milestone in cinema projection and it truly delivered on this promise.”

The Christie Mirage 4KLH system, widely used in demanding applications such as 3D visualization, visitor attractions or theme parks, has been specially modified to screen Lee’s ultimate rendition of his vision. Featuring Christie TruLife electronics platform with an industry-leading video-processing pipeline of up to 1.2 Gigapixels per second, and anchored by the Christie Freedom laser illumination system, the Mirage 4KLH can produce up to 60,000 lumens per head, with potentially up to 120,000 lumens when two projection heads and two sets of RGB laser light sources are used (i.e., in a dual 6-Primary configuration).

For the movie premiere at Vieshow Cinemas, the dual Mirage RGB laser projection system was configured to produce a brightness of 28 foot-lamberts using 16 laser modules installed in two laser racks, delivering the finest 3D-viewing experience. The Christie team, working closely with Vieshow Cinemas’ technical department, provided technical consultation at every stage of the installation, from pre-staging, onsite setup and delivery.

Dr. Don Shaw, Senior Director of Product Management and Sales, Christie Asia Pacific, commented, “Ever since we screened a 15-minute preview of the film with director Ang Lee in April at NAB 2016, and again with clips at IBC 2016, we have demonstrated to the world that Christie is the only projector manufacturer capable of showing 4K, 3D and 120 fps per eye on a giant cinema screen. Although the Mirage system is not our purpose-built cinema laser system, it clearly gives us a glimpse of what could be the future of cinema projection. We are pleased that exhibitors such as Vieshow Cinemas have decided to invest in our Mirage 4KLH system, along with a select few other premium venues worldwide. This is unquestionably the most advanced projection system available, and the only system that can screen this landmark film in the way that the Director intended it to be seen.”

“We are heartened that Christie has played a crucial role in creating cinema history by becoming the only projector manufacturer to provide a projection system that meets the definitive requirements of director Ang Lee for screening his new film,’Billy Lynn’s Long Halftime Walk’,” said Lin Yu, Vice President, Christie Asia Pacific. “This is a clear illustration of the superiority of Christie’s projection technologies and we are very happy and proud to be able to bring Lee’s artistic vision to reality, and to share it with audiences from around the world.”

Besides Taiwan’s Vieshow Cinemas, China’s Shanghai Film Group and Bona Film Group will also showcase “Billy Lynn’s Long Halftime Walk” in 4K, 3D, and 120 fps using dual Christie Mirage projectors in the premium auditorium of their flagship theaters. The movie will debut at Beijing Bona Youtang International Cineplex and Shanghai Film Art Center on November 6 and November 8 respectively. In the United States, the dual Christie Mirage projectors delivered the east-coast premiere at the New York Film Festival and are set to repeat this momentous showing for west-coast audiences at the ArcLight Cinemas Cinerama Dome on November 10.

Taiwan-born Lee, who won two directing Oscars for “Brokeback Mountain” and “Life of Pi”, is known for both his dramatic storytelling and adoption of new technologies. For “Billy Lynn’s Long Halftime Walk”, which tells the story of a soldier who fought in the Iraq war, Lee decided to push the technological boundaries in order to give the film an “immersive” and “realistic” experience of the reality and emotional journey of soldiers. It is the first ever feature film to be shot in such a high frame rate – over twice the previous record (Peter Jackson’s “The Hobbit: An Unexpected Journey”, shot at 48 fps) and five times the standard speed of 24 fps.

About Christie
Christie Digital Systems USA, Inc. is a global visual and audio technologies company and is a wholly-owned subsidiary of Ushio, Inc., Japan, (JP:6925). Consistently setting the standards by being the first to market some of the world’s most advanced projectors, complete system displays and audio solutions, Christie is recognized as one of the most innovative technology companies in the world. From retail displays to Hollywood, mission critical command centers to classrooms and training simulators, Christie display solutions and projectors capture the attention of audiences around the world with dynamic and stunning images, and captivating sound. Visit www.christiedigital.com.