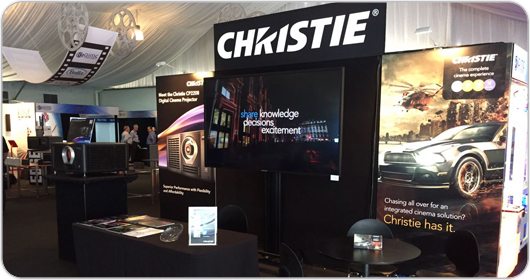 Wokingham, UK (June 7, 2018) –  Christie, a leader in creating and delivering the world’s best visual and audio experiences, continues to set the standard for cinema technology innovation with its presence at CineEurope, June 11 – 14 at the Centre Convencions Internacional Barcelona (CCIB).

Highlighting Christie’s participation at CineEurope, where it has been a mainstay for many years, will be a 15-seat theater in Suite D, featuring the latest trailer content projected in stunning, colorful detail with the 2K version of Christie’s  family of RealLaser™ cinema projectors, the CP2315-RGB pure laser projector.

Alongside the visuals emanating from the CP2315-RGB projector, the impeccable sound of Christie’s Vive Audio™ screen channel and surround loudspeakers, a fast-growing favorite of exhibitors with Dolby Atmos systems across Europe and the Middle East, will delight attendees.

“Since previewing the CP2315 and CP2320 at CinemaCon, Christie is delighted to officially launch both products at Cine Europe in Barcelona. The 12k lumen CP2315-RGB and its 18k lumen counterpart, the CP2320-RGB, will have all of the ground-breaking features found in the CP4325-RGB, and more! As well, RealLaser projectors are able to use our existing lens suite, for added value,” said Dale Miller, executive vice president, Cinema, at Christie. “Both models build on the success of the CP4325-RGB, which has been shipping globally to customers around the world since March to much acclaim.”

(Christie will also be presenting a preview of the CP2315-RGB and CP2320-RGB projection solutions as part of the ICTA SEMINAR SERIES Barcelona at 4pm Sunday June 10 as part of the Innovations in the Pipeline track.)

Boasting an innovative, patented, and all-in-one, direct-coupled RGB illumination system, Christie’s RGB projection solutions are the most advanced laser projectors on the market, using next generation, pure red-green-blue direct-emitting laser technology to deliver an unequalled, authentic and immersive cinema experience (and one that is finally available for the mainstream exhibition market in a cost-effective offering).

Led by the CP4325-RGB, the RealLaser™ family offers all the advantages of a high-performance laser projector in a compact ‘all-in-one’ form factor that eliminates the need for sub-ambient external cooling, while providing a low cost of ownership, excelling in image quality and posting an impressive operational lifetime.

Christie friends and family at CineEurope

In addition to Christie’s presence, Thomas Rüttgers, Managing Director of ECCOPLEXX – a valued Christie partner – will moderate a panel on ‘Designing the Theatre of Tomorrow’ – at 1pm Tuesday June 12 in the main convention center ballroom, Exhibition Hall, Level 0.

Christie Vive more versatile than ever, with 1,000 installs and counting

It has been a busy 2018 for Christie to date, with much activity befitting the cinema leader.

Most recently, Christie installed 29 projectors from across its digital cinema projection portfolio, including its leading lamp-based model, the 4K CP4230, as the projection technology partner for the Cannes Film Festival. “Christie delivered 1,600 screenings over the course of our 12-day event, with no projection problems, and that is typical of Christie reliability and performance,” said Jean-Baptiste Hennion, CTO of Cinéma at 2AVI.

The year has also witnessed an agreement with Wanda Film Holding, a subsidiary of Wanda Group and the Asia’s largest cinema operator, to jointly establish a research and development (R&D) center for cinema technology within the Wanda Studios’ site in Qingdao, Shandong Province, China. The Wanda-Christie Cinema Technology Center of Excellence (CTCE) will be solely owned by Wanda Film Holding, with Christie as the sole partner to exclusively operate the high-tech facility for advanced R&D of digital cinema projection systems, including:

Tried, tested and true, xenon lamps have been the cinema industry’s workhorse for decades and have stood the test of time as a reliable illumination source; one that provides great onscreen color and brightness. It’s hard to beat the value that xenon lamps offer as they continue to have the lowest Total Cost of Ownership (TCO) of any illumination source for cinema; a consideration which remains one of the most important for cinemas today. On select models of Christie xenon projectors, Christie is offering the option to bundle xenon lamps together with the projectors, so that all the lamps that are required to run the projector within its warranty period are included with the purchase of your projector. Christie customers should contact their sales representatives for complete details, including any regional exceptions.

When it comes to value, xenon lamp technology still provides outstanding performance, reliability, and TCO to exhibitors. With there now being more cinemas in operation than ever before, there are subsequently more xenon lamps in cinemas than ever before. Overall, xenon today – as well as visionary RGB laser illumination systems – are superior to other illumination systems for cost of ownership, contrast, color accuracy and system reliability, for the majority of cinemas worldwide.

Christie Digital Systems USA, Inc. is a global audio and visual technologies company and is a wholly-owned subsidiary of Ushio, Inc., Japan, (JP:6925). Consistently setting the standards by being the first to market some of the world’s most advanced audio solutions, projectors and complete systems, Christie is recognized as one of the most innovative visual technology companies in the world. From retail displays to Hollywood, mission critical command centers to classrooms and training simulators, Christie display and audio solutions and projectors capture the attention of audiences around the world with dynamic and stunning images. Visit www.christiedigital.com for more information.