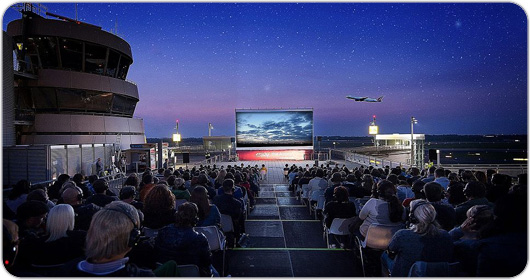 Summer is traditionally the time for open air cinemas, including the OpenAirport Cinema in Düsseldorf, where visitors experienced an open air cinema with a special touch, as various Hollywood blockbusters were shown on the airport terrace every weekend in July. Christie® partner BIG cinema GmbH, which specializes in large cinema event and experiences, was on board as the company responsible for the projection technology and chose the Christie CP4230, a native 4K 3DLP Cinema® projector.?

The cinema at this rather unconventional location has developed into an absolute visitor magnet, as evidenced by tickets for ten of the eleven shows selling out very quickly. It’s a special atmosphere, with everyone in attendance having a direct view of the planes taking off and landing in the evening sky behind the 12 x 6 metre screen. This was a truly special “air-xperience”, and not just for aircraft and airport enthusiasts.

?In keeping with the airport terminology, the guests were also able to reserve “Premium Economy” seats this year alongside the standard “Economy” and “Business Class” options. This proved very popular among the guests, as André Barczewski, live communication expert from Düsseldorf Airport, explains: “The unique atmosphere on the visitor terrace is a genuine highlight year after year and for many visitors a reason to keep coming back. In addition to this, introduction of the third seating category, “Premium Economy,” certainly proved another highlight this year and was well received by the guests.”

The airport opened its terrace to visitors for the fifth time in keeping with the maxim of “exclusive air-xperiences”. “We are delighted to once again be on board this year as the company responsible for the projection technology,” explains Johannes Bernstein, CEO at BIG cinema. “The OpenAirport Cinema offers a very special atmosphere. With the planes taking off and landing in the background, it is easy to gaze off into the distance. It is therefore all the more important to use the right technology to deliver an absolutely perfect image.”

“We have been working with Christie projectors for many years and appreciate the absolute reliability and image quality their units offer. We decided to go with the CP4230 due to its high light output. Despite the 38 metre projection distance and the degree of ambient brightness at the airport, the projector produced bright and brilliant images on the screen, which enabled us to offer the guests a unique cinematic experience,” explained Bernstein.

The team from Düsseldorf Airport was extremely enthusiastic about the events. “Following the major success in 2017, we were able to once again increase the number of guests in what was our fifth hosting of the event. With a total of 5,400 guests, this year’s OpenAirport Cinema was the most popular yet. Despite increasing the number of seats to 512, almost all showings were sold out this year. We had great weather throughout and clearly met the guests’ taste with the films we selected,” added Barczewski, who is confident that “the OpenAirport Cinema will certainly be repeated again next year.”

Christie Digital Systems USA, Inc. is a global visual and audio technologies company and is a wholly-owned subsidiary of Ushio, Inc., Japan, (JP:6925). Consistently setting the standards by being the first to market some of the world’s most advanced projectors and complete system displays, Christie is recognized as one of the most innovative visual technology companies in the world. From retail displays to Hollywood, mission critical command centers to classrooms and training simulators, Christie display solutions and projectors capture the attention of audiences around the world with dynamic and stunning images. Visit www.christiedigital.com.